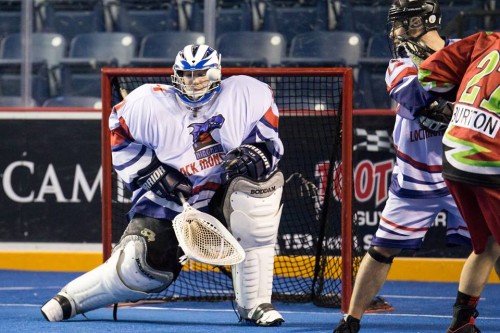 Only six points separated the Niagara Lock Monsters and Ohsweken Demons in the final regular season standings but the two teams couldn’t be further apart. The Demons weren’t great this season sporting a record of 4-6, with three of those six losses coming against Niagara, the first place seed, including two 16-6 losses. Niagara started the season 0-2 before racking up four wins in a row and establishing themselves as one of the season’s top teams, finishing with a 7-3 record.

The Lock Monsters only scored 15 more goals than the Demons so Ohsweken has the fire power to win this game, they just have to start playing at both ends of the floor. Defensively, the Demons let in 53 more goals than the Lock Monsters. Ian Martin led the Demons with 42 points while Vaughn Harris followed behind with 36; both made the top ten in league scoring. For Niagara, Corey Fowler led the league with 45 points – 16 goals and 29 assists. Brian Neufeld, Brendon Thenhaus, and Phil Caputo all hit double digits in goals.

On paper, Niagara should have this in the bag, and in a seven game series they’d win every time. But in a one game playoff anything can happen – even if the Demons weren’t consistently good during the season, they only need to have one good game to pull off an upset, and they’ve had two weeks off to rest and practice, while Niagara will have only had one. Don’t ever count out a team from Ohsweken. This game will be fun to watch.

This will be the marquee matchup in the first round and it’s a disservice to these teams to have them only play a single elimination game. Durham and Barrie finished the regular season tied for second place with 12 points each and a head to head record of 2-2. Each team won once at home and once in the other teams barn, and the last two games were decided in overtime. As CLAX’s two Eastern-most teams, they’ve built up a natural rivalry. Barrie are the defending Creator’s Cup champions but the Turfdogs will have the home crowd on their side.

On offense, each team has two players in the top ten of league scoring. However, Thomas Hoggarth, who sits 9th with 29 points, is with the Vancouver Stealth. Dylan Goddard sits 5th with 40 points. Geoff McNulty and Cody McMahon are second and third on the Turfdogs with 27 and 26 points, respectively. After that top three, Durham’s scoring is more by committee. Should they be available, John St. John and Derek Hopcroft would be big boosts to the Durham lineup. Shane Scott and Caleb Wiles lead the Blizzard with 38 and 36 points respectively. Mike Teeter, in the six games he played, racked up 29 points and is a threat every time he’s on the floor.

Durham has a tough choice in goal. Lukas Coote seems to be the most likely choice as he’s had the bulk of the starts recently. Cole Murray has played very well in his couple of starts and several relief efforts. Barrie will likely go with Angus Dineley who has played well against Durham and finished with a 4-3 record on the season.

In their second meeting of the season, a line brawl broke out that resulted in injuries and suspensions, not to mention some lasting bad blood. Subsequent match-ups, while not as violent, were rough and intense. These two teams meeting in the playoffs is a dream come true. Expect a lot of hard checking and for both teams defences to be at the top of their game. Either team could win this.