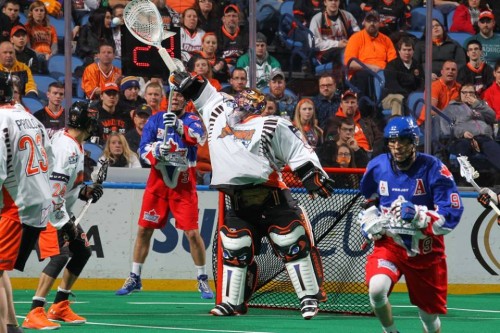 When you’re down 4-1 before the first television timeout, your starting goalie is pulled after being overwhelmed for the second game in a row and Dhane Smith is starting to get hot, the chances of winning that game are about the same as the Vancouver Canucks making the playoffs.

The Vancouver Stealth went 6-1 after a quarter of play and eventually found themselves down 10-3 at halftime, largely the byproduct of a stifling Buffalo Bandits defense and great goaltending from veteran Anthony Cosmo before losing 13-8. The Stealth let Dhane Smith go off for five goals and eight assists, pushing his NLL-leading point total to 84, 19 more than Callum Crawford’s second-place total. After allowing Adam Jones to single-handily defeat them the week before, it was pretty obvious not much had changed in the gameplan to defend Smith, and it showed.

Vancouver elected to play Smith straight up through a lot of the game, mostly with Jeff Moleski. Buffalo almost runs entire shot clocks creating space for Smith to find shooting lanes or draw extra defensive coverage to dish to another Bandit. The result of defending Smith one-on-one? Check to see when Smith absolutely freezes Jeff Moleski with a split dodge and goes far-side top corner before the goalie can even react.

It’s stunning to see how few adjustments are made to defend on the Stealth’s part. When Jones ripped six straight, the Stealth continued to defend like there was nothing wrong. The same deal happened last night. No adjustments. Or if there were adjustments, the talent on that end simply isn’t good enough—something we know not to be true given prior performances.

The Stealth are lucky Calgary has had the same trouble winning games consistently this year, but next Sunday in Toronto almost becomes a must-win game for Vancouver.

What may be more impressive on the Bandits end wasn’t just the offense continuing to roll, but how good the D was when it mattered. They made life difficult for Rhys Duch and Garrett Billings—although they combined for nine points, they also combined for that many turnovers—and gave Vancouver a clinic in how to play good defense within a strong defensive structure. They don’t over extend, they don’t get dragged out on the pick and roll and rarely is there a good shooting lane afforded.

When I took Buffalo to go to the NLL East Division this year, I admittedly thought the defense would be the thing that would stop them from doing that. One game doesn’t make a season, but there’s no reason Buffalo can’t replicate this performance when it mattered, especially if Cosmo can play as well as he did last night.

And for as well as Buffalo’s D played, the special teams were an integral part of the win. Just 12 seconds into the second half, and mere seconds after a Steve Priolo-Matt Beers tilt, Billy Dee Smith took a major high sticking penalty. With Vancouver down seven and the league’s best power play unit on the floor, the Stealth failed to score. The offense petered out, scoring just one goal in a pivotal third quarter and failing to mount a similar comeback that they pulled off two weeks ago against the Roughnecks.