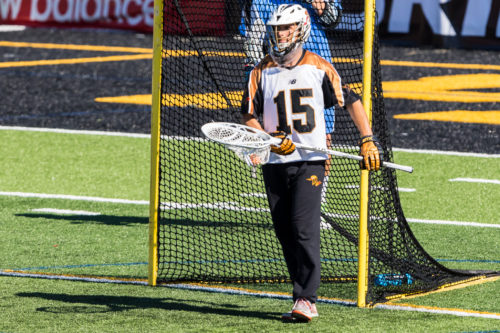 It’s midweek again, which calls for the three best ‘keepers to be recognized for their performances in week 10 of MLL regular season play. This week the league saw offenses tearing up long poles and keepers, yet these three were able to hold their own and get their squads big wins.

For the second week in a row John Galloway earns the Crease Coach MLL goalies of the week first star. MLL week 10 saw goalies getting thrashed by an insurmountable amount of shots. Yet Galloway was able to keep his cool and earn another big win for the Rattlers. The Syracuse graduate saw 28 shots against and saved 16 of them; only allowing 12 goals for Ohio’s massive offense. Rochester is one of the hottest teams in the MLL right now and a big part of that has been due to Galloway’s performances in cage. He lead his defense to a great win over a very strong Machine. Galloway was one of the few keepers this week to have a higher save number over their goals against number. If he keeps this up the Rattlers will be a team that has every right to be in the playoffs this year.

Denver achieved a major 20­16 win over the defending champs, New York. The rookie goalie looked like a seasoned veteran against the star studded Lizards offense. Kelly escaped the game with 16 saves and 14 goals against. Not to mention the 30 shots against from names like Rabil, Walsh, Gibson and Panell. For a first year keeper who hasn’t been instilled with too much confidence from his team, sharing time with Ryan Laplante; he came out big against a great squad. A dark period may loom on the horizon for the Outlaws with the recent loss of legend John Grant Jr. Denver will need Kelly to keep this momentum going if they have any chance of salvaging their season. It looks like the Outlaws have finally found their man in cage.

Third Star: Charlie Cipriano Cipriano earned the third star for his performance in the win over Atlanta. The big man out of Fairfield had 28 shots against and saved 14 of them; allowing 14 goals against. With this win the Hounds are right back into playoff hopes for the end of the regular season. Although he broke even for saves and goals against, Cipriano’s performance allowed the Hounds to get a stunning 19 goals over the Blaze for a crucial win. Holding off MLL points leader, Kevin Rice and stud out of Denver Mark Matthews, earned him the third star of the week. Going against big offensive names like this and holding fast is a feat on its own.

Crease Coach heads to Denver next on July 5th, before heading to Salt Lake City, Scottsdale, and Irvine.