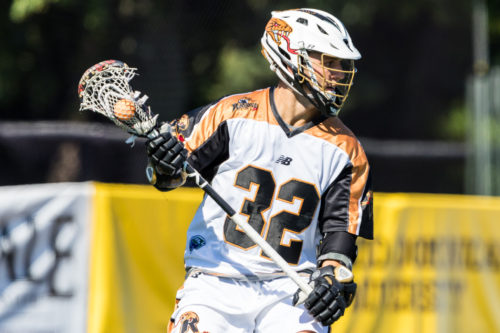 The MLL standings are extremely tight, with six teams within two games of first place. Take a look back to another exciting weekend in Major League Lacrosse with our three stars.

Wolf continues to be on a tear, following a 10-point performance last week with seven points in a 16-13 win at Ohio. Four of his points (two goals, two assists) came in the game’s final 11:53 as he helped break a 9-9 tie after three quarters of play. Rochester ended the game on a 6-2 run to win its fifth straight game as the Rattlers improved to 5-3 on the season while Ohio fell to 6-4. Wolf is now fourth in Major League Lacrosse with 43 points (29 goals, 14 assists).

Brown was a catalyst in Charlotte’s quick start as the Hounds took a 7-2 lead after one quarter of play against Atlanta, on the way to a 20-14 win. The Johns Hopkins alum had a goal and two assists in that stanza, adding a goal in the second and third quarters and two goals in the fourth. Brown’s eight-point performance came after just six points in his first three games of the season. Charlotte improved to 5-3 on the season while Atlanta fell to 3-5.

Fahey helped led the Boston defense in a 17-14 win over Chesapeake, finishing with a team-high seven groundballs and two caused turnovers The Cannons’ D allowed three goals or fewer in the first, second and fourth quarters as Boston took a 9-5 lead at the half, on the way to improving to 5-5. The Bayhawks fell to 4-4. On the season, Fahey owns 25 groundballs and six caused turnovers.