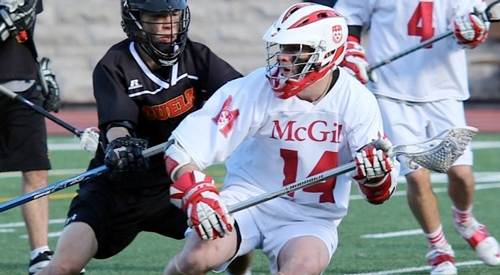 As the final seconds ticked off the clock in the 2014 Baggataway Cup final, Head Coach of the McGill Redmen Tim Murdoch could only think to himself, “Why didn’t we play like we did in the final 10 minutes for the entire game?”

In those final eight minutes, the Redmen scored seven unanswered goals to close an 11 goal gap, but unfortunately for McGill it wouldn’t be enough as the Guelph Gryphons to beat McGill in the Baggataway Cup final for the second straight year.

With the pain of the National Championship still in the minds of the Redmen, Murdoch and his team are motivated for another season and are searching for their fifth straight East Division title and to capture the program’s second Baggataway Cup.

There won’t be a lack of experience in Montreal this season as 14 seniors return to the field in 2015.  “One dozen of these players were members of McGill’s national championship team in 2012,” said Murdoch. “They are aware of the challenges and difficulty of winning the Bagattaway Cup, and eager to battle in the CUFLA to earn a championship over a grueling 12-game regular season.”

Despite losing All-Canadian defender Danny McDermott, Murdoch is very optimistic about his defensive core for this season. “The Redmen’s defense in 2015 will be our deepest in the team’s history,” said Murdoch.

McGill will look for Paul Rakoczy to anchor the defense. The 6-foot-2, 210 lbs defender from Burlington, ON was a co-captain last season and will continue to be a big part of the team’s strong defensive core. 2014 All Canadian Brad Hofmann and Mississauga, ON native Hayden Nix round out the veteran defense unit. The three time LSM All-Canadian Quinton Bradley returns for his fourth season. The Richmond, BC native was named CUFLA’s Rookie of the Year in 2012 and has since been a dominant force at the LSM position.

At midfield, returning co-captain Connor Goodwin will look to build off his career best season of 33 points last year and once again lead the Redmen offense. The three-time All-Canadian has 89 points in 28 career regular season games with the Redmen.

Alongside Goodwin, newly elected captains Anders Bjella and Rufus Frost will play a much larger offensive role in 2015. Bjella, a Milwaukee, WI native netted 12 goals and seven assists for 19 points in nine games last season. Frost, the Utah product, finished 2014 with seven goals and three assists for 10 points. Fellow American, Emile Sassone-Lawless will play on the first midfield line alongside Goodwin and Bjella. The dual French-US citizen had a big playoffs, tallying five goals and six assists for 11 points in three games.

After a breakout season in 2014, junior Spencer Bromley looks to continue to make strides offensively for the Redmen. The Delta Islanders Jr. A product led McGill in scoring with 35 points (26 G, 9 A) in 10 games, which led to a All-Canadian selection.   “Bromley is a crafty finisher, and continues to mature into a talented attackmen,” said Murdoch. “Given the departure of former two-time McGill captain and two-time All-Canadian Alex Rohrbach, Bromley is expected assume a leadership role on attack.”

Returning in the cage is junior netminder William Waesche. The Greenwich, CT native was named the Most Outstanding goalie and McGill’s MVP last season. The All-Canadian goalie posted a league best 4.83 goals against average while producing a perfect 9-0 record. Waesche is not just a ball stopper as he brings a different dynamic to the clear game with his strong stick skills and athletic ability. The McGill tender became just the second goalie to score a goal in CUFLA history as he found the back of the net against Queen’s last season.

Although the Redmen are filled with veterans, there won’t be a lack of youth in Montreal this season. Murdoch once again had a busy offseason of recruiting, bringing in 13 new players. Headlining this year’s crop of freshmen is defender Brendan Mullen and hometown product Maxime Murdoch.

“Mullen turned down several NCAA lacrosse scholarships in favor of McGill,” said Murdoch. “Mullen headlines a talented group of incoming freshmen expecting to form the core of the Redmen’s defense as we look to rebuild in 2016-17.”

Maxime Murdoch, a Montreal native, is a big attackman that will hopes to make an immediate impact from day one. The 6-foot-4, 215 lbs freshmen is a two-time captain of Team Quebec’s lacrosse team, while he also played for the TriState US HS All-Stars, the Ottawa Capitals while also playing at the IMG Academy in Florida. Like Mullen, Maxime Murdoch turned down multiple NCAA offers in favor of returning to Canada to play CUFLA ball. If you haven’t already guessed, Maxime is the son of head coach Tim Murdoch. Maxime has been a part of the Redmen since the age of eight, which may have had an impact on heading back up north to play for his father’s Redmen.

Like always, Murdoch is bringing his club south of the border during their bye week for a couple of exhibition games against NCAA clubs. This year McGill matches up with 2014 DII Final Four competitors Merrimack College on October 17 in Andover, MA. The very next day, the Redmen ship up to take on Boston University, a fast-rising NCAA DI program. Murdoch believes using the week of rest to play strong American clubs will only benefit his squad in the long run.   “Playing back-to-back road games against teams that ‘on paper’ would be expected to beat us at home will put us in the unusual position as an ‘underdog,’ and it should prepare us for big challenges that await in the Bagattaway Cup tournament in Lennoxville, QC in early November,” said Murdoch. “McGill is a proud member of the CUFLA, so we believe that any success we may enjoy versus NCAA teams can help to heighten awareness of our league.”

Murdoch and the Redmen have their eyes set on their home opener on September 11 against Concordia but there’s no doubt the Baggataway Cup Final Weekend has some major real estate in the back of their minds.   “Assuming we manage to qualify for the Bagattaway Cup final weekend, we hope to play Guelph again,” said Murdoch. “We’re dying for a rematch.”