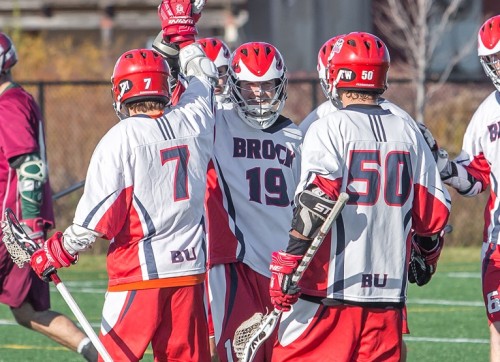 For the first time in program history, the Brock Badgers had a senior class graduate without ever hoisting Baggataway Cup. For most programs, that five year drought may not seem like a big deal, but for the Badgers, it’s an epidemic.

Coach Justin Kennedy isn’t ignoring the fact the championship dryspell has taken a toll mentally on the players, but he still has great faith in his team.

“The pressure of accountability in the past has seemed to have hinder our focus on learning,” said Kennedy. “However, we believe that we have built a program that will be sustainable and will continue to be successful in this league.”

Kennedy pointed to discipline as one of the catalysts to their lack of post season success for the Badgers. In the 2014 Baggataway Cup semifinals, the Badgers took 10 penalties while their counterparts and eventual National Champion Guelph Gryphons managed to stay out of the box the entire game. The Badgers only allowed three goals on the penalty kill, but that would be the difference as the Gryphons won 13-12.

Along with improved discipline, Kennedy believes competitiveness in the cage will be a huge boost to the program. The Badgers have been solid in net in the past five years with netminders of the likes of Cam Watts, Ian Duffy and Ryan Jones, but this season has a different dynamic in the Brock crease.

“We have battle for starting position right now with five goalies trying out,” said Kennedy. “We recruited well and attracted a couple guys.”

Avbar saw just parts of four games, while earning a victory against Laurier. Guiney has a 7-7 record in his four seasons with Queen’s. The Toronto,ON native’s best season came in 2013, posting a 9.75 GAA with a 4-1 record. Wood, a 6’0 190 lbs local product from Notre Dame Welland High School. Spragg comes to Brock from the Newmarket Redbirds and Edge Lacrosse while Mitch Hannigan is from Nova Scotia.

Kennedy didn’t only focus on bringing talent in the cage, as he believes this year’s strong recruiting class can help fill the offensive void of Greg Davidson and Kyle Davis.

Jeremy McWaters, Nick Karam, Davis Neil and Connor Ham are all attackmen that Kennedy believes that can make an immediate impact for Brock.

McWaters is coming off a big season with the Green Gaels of the Ontario Jr.B Lacrosse League where he posted a career and team high of 72 points.

Karam, like McWaters is a Whitby,ON native, posted 25 points in 2014 for his hometown Jr.A Warriors.

Neal, a lefty from Orangeville,ON posted 67 points in 27 career Jr.A games with the Northmen. Neal will hope to immediately bring chemistry alongside his summer teammate Brandon Slade.

Ham comes to Brock as a transfer from Hartford University where he appeared in one game and registered one assist in his freshmen season last year. This past summer, the righty posted 38 points in 15 games with the Newmarket Saints of the OJBLL.

Slade recognizes that the program graduated some major offensive threats but is already impressed with the new incoming crop of talent.

“We lost a lot of great lacrosse players the past season,” said Slade. “But there is a great recruitment class coming in so that definitely will successfully benefit us.”

Although this year’s recruiting class is already catching many eyes, the returning core of the Badgers should not be over looked.

Leading the way for Brock this year will be the aforementioned two-time All Canadian Slade. In 23 regular season games played, Slade has potted 49 goals, 56 assists for 105 points. With an already impressive CUFLA resume, it is hard for Slade to improve his game, but the Orangeville,ON native believes he needs to have am impact on more than just the game sheet.

“I feel I need to pick up some of the leadership that we’ve lost from the great graduating class,” said Slade. “Also, there’s always room for improvement on my game and to get better.”

Alongside Slade, Kennedy will look for sophomore Matt Bourassa and junior Nick Rybka to step up and become impact players. The two only combined for nine points last season but have had solid summers in junior lacrosse. Bourassa hoisted the Founders Cup with the Akwesasne Indians this past Sunday night. The Cornwall,ON native tallied 50 points in the regular season with Akwesasne. Fellow midfielder, Rybka netted 60 points in 19 games with the Brampton Excelsiors Jr. B.

On the back end, the Badgers will be once again led by sophomore defender Parker Baile. The 6’4 210 longpole was named a 2015 All Canadian in his freshmen season last year. Baile was a force defensively in his first CUFLA season, being called upon to defend the opponents best player each game. Although Baile has only been a Badger for one season, he understands the great winning tradition Brock has.

“It’s long over-due that Brock has not brought the cup home,” said Baile. “The pressure is felt for by all returning players and coaches. Brock lacrosse has a very rich history of national title winning teams and every year the goal is the same.”

In the faceoff X, the 2015 draw specialist All Canadian Nico Beaudoin will look to build off an impressive first CUFLA season and get involved more offensively. The Welland,ON native posted seven goals and two assists last season.

With a strong returning core combined with a quality recruiting class, Brock is poised for another successful season, but that won’t be good enough for the Badgers.

“Obviously our expectations for the upcoming season is to bring the cup back home to St. Catharines,” said Slade. “Especially after last years loss.”

The Badgers quest to end the five year Baggataway Cup drought begins on Friday, September 11 as they take on McMaster in Hamilton. The very next day, Brock takes on the defending Baggataway Champions Guelph Gryphons, the very same team that sent them back to St. Catharines empty handed.