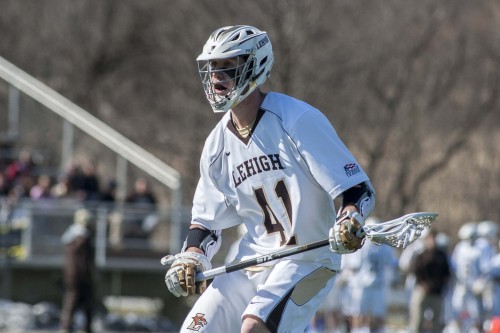 Dan Taylor entered Lehigh as a good high school player with enormous potential. He’s leaving a champion, All-American and one of the best collegiate players on the continent.

“When he was recruited, we knew he was going to be a very good player,” said current Saint Joseph’s head coach and former Lehigh assistant Taylor Wray. “He’s put a lot of work into developing his game, which has made him an elite-level player.”

“Having to play against and base our scouting report on Dan twice in his career, I am keenly aware of his presence, impact and effect on the Lehigh program,” said Denver head coach and legend of the sport Bill Tierney. “He is a true competitor and we look forward to seeing him continue his lacrosse career out here in Denver with the Outlaws (of Major League Lacrosse).”

“Dan Taylor is one the top five collegiate attackmen I’ve had the privilege of coaching in my 11 years in the profession,” said Lehigh head coach, former Duke assistant coach and current assistant coach of the U.S. National Team Kevin Cassese. “The others I’d put in my top five would be Matt Danowski, Zack Greer, Ned Crotty and David DiMaria. Specific to this era of lacrosse, I put Dan Taylor in a similar category to Lyle Thompson, because they both have the ability to completely take over a game. They both have the ability to make the players around them much better. They both force opposing defensive coordinators to come up with game plans (often completely different than their normal schemes) specifically to stop them. They are both incredibly humble and have personalities and core values that the lacrosse world can be proud of.”

Thompson is the NCAA all-time leader in career points, currently owning 371 while Danowski and Greer are tied for third all-time (353 points each). Lumping Taylor in the same conversation as Thompson, Danowksi, Greer, Crotty and DiMaria is high praise…

The Numbers Don’t Lie
11820When you think of a top offensive player, you normally think about someone like Paul Rabil, the flashy midfielder who split dodges the defense and leaves defenders in the dust. Taylor is a different type of player, but will be remembered as one of the best at his craft.

Taylor’s numbers tell a story of not only the elite at Lehigh and in the Patriot League, but also an elite player in the national landscape.

Leading into the games on Apr. 24, Taylor stood fourth in the country with 77 points behind 41 goals and 36 assists.

11821Since the beginning of 2014, Taylor has posted 143 points behind 88 goals and 65 assists which is third over the last two seasons behind just Thompson of Albany (216 points) and Mike Rooney of Stony Brook (144) and a full 12 points ahead of the next player, Kevin Rice of Syracuse.

Taylor entered Lehigh as primarily a goal-scorer, but diversified his game, especially as a junior and senior. Taylor is one of just three players to tally at least 65 goals and 65 assists over the last two seasons. Thompson and Rooney are the others.

“Dan has a great sense for the game,” said Wray. “He’s always got his head up. He’s a terrific scorer. I think he’s a goal-scorer first, but what separates him is his ability to see the field, passing it when the slide comes or throwing it behind his back to a cutter on the crease. He’s got a great sense for the game and a great ability to find the open man when defenses key in on him.”

11822Taylor has been keyed on, often double and triple-teamed, but he’s continued to produce. In fact, Taylor leads the nation in percentage of team offense this season. His 77 points came on 163 Lehigh goals (47.2 percent) while no one else has had a hand in more than 44.8 percent of his team’s goals.

A great example is against Boston University when Taylor was constantly double and triple teamed. The Terriers held him without a goal, but he dished five assists (including a behind-the-back assist which made SportsCenter’s top 10 plays), having a hand in half of the team’s 10 goals, which included an assist on the game-winner with 2:37 remaining in a 10-9 victory. He makes everyone around him better, helping someone like Reid Weber enjoy a breakout junior campaign which saw him tally 51 points behind 38 goals and 13 assists.

11819Taylor has produced against the nation’s best. In fact, he has faced higher-ranked defenses than any of the top 10 scorers in the nation. When breaking down where opponents’ defenses stacked up nationally (after games on Apr. 23), Taylor faced an average-ranked defense of 28.6, which has allowed an average of 9.6 goals per game. That includes an Army West Point defense ranked third (allowing just 7.21 goals per game) and Denver ranked ninth (8.00 per game).

“I think Dan is a phenomenal player. One of the things that separates Dan is his consistency,” said Colgate head coach Mike Murphy. “You see guys with big games, but Dan has been a multiple-point guy on a consistent basis. He was instrumental in a big win against Princeton. As you admire from afar, you watch Dan’s game improve over four years. Behind guys like Dante Fantoni and David DiMaria as a freshman and sophomore, his game has really evolved.”

Any way you look at Dan Taylor, he is one of the best players in the nation.

“He’s definitely an elite caliber attackman who’s among the top in the country,” said Wray.

“Dan Taylor is one of the very best players in the country,” said Army West Point head coach Joe Alberici. “His development as a player in his time at Lehigh has been truly impressive. His creativity in scoring the ball as well as his ability to make others around him better with his passing skills presented an extremely difficult matchup for us over the past four years.”

Beyond Numbers
A constant theme with Taylor is his ability to make those around him better.

“You don’t see a lot of Canadians as adept at distributing the ball as Dan,” said Murphy. “To post 77 points in our league is impressive since our league has always been a black-and-blue type league predicated on defense.”

“In my opinion, Dan’s true greatness can be seen in his ability to get those around him to elevate their play,” said Cassese. “He can communicate exceptionally well and help put people in the right spots to be successful, even though he is always under the extreme pressure of the opposing defense. He’s always calm, cool and collected. There’s never a moment that’s too big for him. He has poise, passion, intelligence, grit, athleticism and incredible skill. He’s just a special player.”

More important than individual numbers is team success. Taylor has won two Patriot League Championships, advanced to two NCAA Tournaments and made another league title game as a junior. The Senior CLASS Award candidate was a team captain this season and helped keep the Mountain Hawks together and focused when they struggled early in the season. The team stuck together, won five of its final six regular season games, and advanced to the program’s fifth straight Patriot League Tournament.

“Dan did a remarkable job of leading this team through a tough season,” said Cassese. “The one thing this team could always count on was rock solid leadership by Dan Taylor and player of the year type effort by Dan at every practice and in every game. When things got tough, everyone would turn to Dan Taylor. There was always a level of comfort and confidence when he had the ball in his stick on the field. There was always a level of security when he was around off the field.”

Among those wins were victories over nationally-ranked Princeton and Stony Brook, which included six points from Taylor against the Tigers including the game-winning goal with 16 seconds remaining, and seven points at Stony Brook just days later as Taylor assisted Lehigh’s final four goals. After the Seawolves stormed back from a halftime deficit to take a lead, Taylor was a calming force and played his best when the game was on the line.

“Dan is a winner. Dan is a champion,” said Cassese. “There was no way he was going to let this thing get too far out of his control. He stepped up big time when things were at their worst and he got others to believe in him and, more importantly, believe in themselves.”

Taylor has made his mark at Lehigh, raising the standard within the program, both individually and collectively.

“Dan scored a lot of goals and set up many others in his career at Lehigh. He’ll be remembered for his point total and the critical role he played in winning back-to-back Patriot League Championships,” said Cassese. “However, in my opinion, his greatest legacy lies in the way he willed and worked himself into the player and man he is today. Becoming an All-American, a Tewaaraton candidate and the Patriot League Offensive Player of the Year is not a process that takes place overnight. It is a process you have to commit to at a much deeper level and over a long period of time.”

That commitment has led to a bright future in lacrosse as well; he’s not finished playing anytime soon. A Major League Lacrosse draft pick by the Denver Outlaws, Taylor also has aspirations to play in the National Lacrosse League. A Canadian who’s always dreamt of representing his country on the national stage and, the nation’s leading scorer among Canadians each of the last two seasons, has a very real chance to turn that dream into reality and play for Team Canada.

“Dan will definitely be in contention during the next men’s national team tryouts,” said Wray, an assistant coach for the Canadian Senior National Team. “It’s an incredibly talented pool of players, so for someone to just be invited to camp – which I assume he’ll be – would be an honor. He’s certainly capable of playing at that level.”

Taylor’s hard work and commitment over the years has put him in position to play lacrosse at the highest level the sport has to offer. A wide-eyed, tall, lanky lefty from Calgary, Alberta showed up at Lehigh not knowing exactly what to expect, but hoping for the best. A couple of championship rings and All-America certificates later, the lacrosse world is realizing the best may be yet to come for Dan Taylor.

“Having success is about setting lofty goals and then having the drive, determination and discipline to battle for an opportunity to achieve those goals every single day,” said Cassese. “That includes the days that you might be a little under the weather, the days when it might be really cold or really hot out and the days that you just don’t really feel like working that hard. The true champions hold themselves accountable to the very highest standards, at all times.

“Dan Taylor did that consistently for four years. He leaves Lehigh University a better version of himself and he leaves Lehigh Lacrosse a better program because of all he contributed during his time as a Mountain Hawk.”