The DU Pioneers are ranked #1 in practically every preseason poll. When I had the privilege of interviewing Head Coach Bill Tierney, he was able to give me more insight into Denver’s growth and how it goes beyond the team.

Denver has (P)ioneered their way to three NCAA Final Four appearances in the last four years. The team is averaging well over .740 winning percentage and has a Denver-career record of 66-23. What did it take to get here?

“It’s an honor to be recognized and we’re taking it that way. We’ve appeared in three of the last 4 semifinals, but we couldn’t win one. So it’s mentally, physically and psychologically challenging to wrap players’ minds around working towards another semi-final instead of them being in the set that they’re already recognized enough.”

Living in Denver myself, I’ve gotten a sneak peak at youth level lacrosse. It is bountiful here, with varsity teams, club leagues, adult recreation, and two professional teams. However, having come from the east coast (Philadelphia area), it’s not east-coast caliber youth lacrosse. In addition, when these players make it to the NCAA level, they sometimes need reminding of how much to push themselves (personal opinion/observation).

“The Mammoth and Outlaws are big influencers. Air Force is doing it right also. California and Oregon and Washington tend to look to us (DU) as home team.”

Tierney’s breakout in his career were his years with Princeton. He admits the program there did not need turning around, but more of a consistency and maintaining. Today, Princeton typically ranks pretty high in the polls and sends quality players on to the pro leagues.

Following that, Tierney went to Johns Hopkins where he dealt with soccer, as well. He admittedly didn’t know much about coaching the sport at the collegiate level, but did understand what it would take to, again, maintain that program, give it hype, and create a quality squad.

Now, Tierney has been with Denver for six years. His resume is decorated with numerous honors and mentions, multitudes of players earning awards, and a school with nothing but growth in its future. Tierney is not afraid of a challenge because he has a more thorough understanding of lacrosse’s growth and NCAA-level recognition. He treats lacrosse as the big sport it already is.

On NCAA growth, Tierney had these thoughts:

“Stop using Title IX and money as an excuse. Pac-12 and other conferences love the MCLA clubs because it doesn’t cost the school much and players pay for it. Their mindset seems to be ‘lacrosse is a small world; why not keep it that way.’ Division-II and -III programs are growing exponentially without big football programs. Lacrosse just has to wrap the traditional sports’ minds around allowing lacrosse to enter [their world].”

Why all this background on Tierney and his thoughts on NCAA Lacrosse? Because it is also obvious this is why Denver University has taken off storming. By instilling the game’s glory and his ‘big picture’ mindset on his team and players, they are motivated to play harder and better. They’re motivated to contend at the same level as any school with a lacrosse program, because lacrosse is just as big as football or basketball or baseball.

Denver boasts a few of the nation’s best lacrosse players, namely Wes Berg who was recently drafted to the MLL, but also Erik Adamson, the Cannizzaro brothers, and Joe Bano.

These players come from areas in California, Nevada, Canada, Ohio, Minnesota and Washington, among other states. It is obvious Tierney isn’t looking at how a player performs in particular systems or areas, but how their personal play and skills can contribute to the Denver team.

Lacrosse would excel at a university if the university views it as a prominent program like basketball or football. Period. On top of Tierney’s skills, he understands how to utilize a school’s support to enhance a program.

“DU has been providing the support needed, from the facilities needed and the numbers to fill a squad to promotion,” Tierney points out. “We instill discipline in new players to turn around mindsets of we’re good enough. We instill in them to be better.”

Tierney points out that one cannot merely focus on Denver’s lacrosse growth. In general, the NCAA is trying to grow the sport away from the Atlantic Ocean, where the vast majority of programs are located. Notre Dame, Ohio, Marquette, Air Force and Denver aren’t located in the main Atlantic region. Yet their programs are established, strong, and contending.

In other words, rather than focusing on one school or team building up a region, look at how the game itself builds up within a region, and how a school merely promotes that.

In 2012, Tierney had a tough schedule that included major Final Four teams such as Loyola, Duke and Notre Dame. He did this because to be the best, you have to beat the best. Tierney led DU to a 9-7 overall record in 2012, ending the season to top-seeded Loyola in the NCAA Quarterfinals after falling one-goal short of a return trip to the Final Four. It obviously paid off as the team learned both the high quality competition available and what it takes to get to the Final Four, let alone top it all.

Now, those hard seasons are paying off. 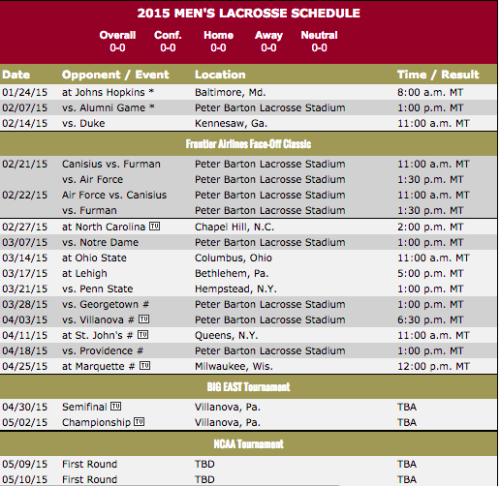 The Pioneers have quality opponents all season long, and the majority of big contests are away games. I predict the toughest games will be against Notre Dame, UNC, Lehigh and Georgetown.

However, that shouldn’t be too much of an issue for the team as the away games are at lower altitudes. Recovery and travel obviously take time, but playing abilities should be in the Pioneers’ favor and build up momentum to head into post-season play.

Tierney is all about discipline. He scouts out individual skill sets, then disciplines the team into working together as one. Working in specific systems and doing it right and effectively. Building up to Final Four appearances. You can teach an indoor player to run a field at any point of their life, and you can teach different systems. But those are nothing without the necessary skills to fulfill those systems.

The Pioneers will be #1 in 2015. Tierney’s direction, insights, recruitment and coaching abilities will all add up this year.

“Getting to the semifinals starts now, in the preseason, and if we can beat all the challenges of even appearing in a semi-final again, then we can focus on getting over that hump to Championship Monday. Once you reach Championship Monday, all things are thrown out the window. You have two exhausted teams who are going to fight for the D-I title.”