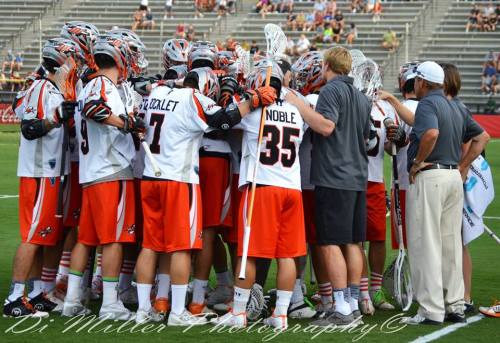 It’s that time of year again when Major League Lacrosse will be gearing up for the Supplemental Draft.  With the National League Lacrosse already in training camp, and many players from the MLL also playing during the NLL season which starts the end of December, it creates a challenge for the head coaches and general managers as to how it will affect their team; which players will be missing during the NLL season as it crosses over with the MLL season; as well as players who have retired; and looking at players from the previous season to see who best serves the needs of their team.

I had the pleasure of discussing with Outlaws General Manager Tony Seaman about their first ever Major League Lacrosse Championship title for Denver in the nine year history of the franchise and here’s what he had to say:

“There is no feeling in the world like winning a Championship. It was especially nice is to share that feeling with the entire Outlaws’ organization and team. To finally realize the dream, that the goal had finally been achieved as the final horn sounded at the end of the championship game.  It was the type of rush that everyone should have sometime in their lifetime, but now it’s time to move on to 2015 and the Supplemental Draft is coming up sooner than one realizes.”

I asked him about the Supplemental Draft needs for the Outlaws as several of their key players will be playing in the NLL.  He said:

So what about the retirement of Lee Zink, who played a huge roll on the Outlaws squad during his career, including his level of play during the MLL Championship game?  He commented:

“It’s a priority is to replace Lee Zink, a chore that almost seems impossible.”

When I asked about what key positions he felt they would be strongest at, and which ones he thought they would have to fill, he said:

“We have decent depth at midfield, so attack and defense are where we will have the biggest gaps until the NLL season ends. With the MLL moving our starting date up to April 11, 2015, we also have to realize that several of our players and coaching staff will be tied up with college coaching positions; and high school coaching positions.”

How important is the Supplemental Draft? He closed with the following:

“It’s always a challenge and something that we have been pretty good at if you look at our record over the past three years,  In the first five games of those seasons I believe we have only lost one or two games total. So, once again the supplemental draft will be very important.”

There is one item to note, Michael “Tree” Simon who was drafted by the Mammoth will not be missing from the Outlaws organization during the 2015 season.  From what I have been told, due to his new job and the amount of travel required during the MLL season, then adding the travel required to play in the NLL it was going to be too much of a burden.  This is huge for the Outlaws with the absence of Chris O’Dougherty for the beginning of the MLL season. It will be a key to keeping the defense for Denver strong.

On behalf of myself and In Lacrosse We Trust, I would like to thank Tony for taking the time during this Thanksgiving holiday to provide us with his thoughts and insights on the upcoming supplemental draft.