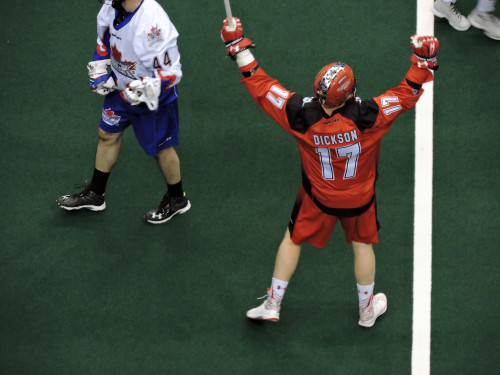 “We kept throwing gas on the fire.” – John Lovell

The Rock fell to 2-7 and remain in last place in the East after a 15-10 loss to Dickson’s Calgary Roughnecks at the Air Canada Centre, their first of two home games this weekend. Dickson’s sock trick led the Roughnecks to their first win since February 6th and improves them to 4-7 and third place in the West.

Dickson’s offensive outburst was welcome for Calgary whose last three games ended in overtime losses. His six goals was a season high for the Roughnecks. They were all highlight reel variety, but his second goal, in particular, is already being played over and over – being hacked and whacked by four Rock defenders, he dodged around the crease and skipped the ball under his left leg past Nick Rose.

“I don’t really care how they go in as long as they go in,” Dickson said post-game. “…Luckily the ball was finding the back of the net for me tonight. Hopefully this will continue on this season and we’ll get some big wins. I got in tight in Rosey’s crease a couple times and he stopped me, he’s a great goalie, he’s good in tight and you have to really pick your spots so I was lucky enough to get a few passes in there tonight.”

Toronto head coach John Lovell recognized that his team did all they could to contain the star but that sometimes it’s less about the defense playing badly than the fact that some players are just that good.

“There weren’t that many goals that we gave up defensively,” Lovell said. “You have to give credit to a player like Dickson, we had him stopped on a number of occasions but he just fires the ball and it goes in the net. And that’s not on our goalie. But he found those spots.”

Dickson was the main target for the Rock’s defense who, despite the six goals he put up, was contained quite well. Defenders were throwing themselves in front of Dickson in an effort to stop him and taking him the floor as often as they could.

“That’s one thing about Dickson, he’s a competitor but he channels his emotions in the right way,” Malawsky said. “If you’re gonna knock him down he’s not going to get up and put one in your mouth and take a high stick on you, he’s going to come up and put the ball in your net and that’s a great quality to have. He falls in that category of the great character guys we’ve got in our room.”

Calgary’s transition killed the Rock the entire game. Numerous breakaways and two-on-ones gave the Roughnecks a jump over a frustrated looking Rock offense and tired out the defense coming off the bench. Rookie defenseman Tyson Bell had a pair of goals and transition player Karsen Leung had three.

“That’s unacceptable from the offense obviously, that’s on us,” Rock forward Rob Hellyer said. “We can’t let them run like that and give them opportunities with guys like Dickson coming off the bench, he’s pretty automatic.”

The Roughnecks had three shorthanded goals, one power play goal, and two empty netters from Leung as the Rock tried desperately to come back late in the third.

Lovell was frank about his special teams.

“We weren’t as successful on our power play as we usually are and you can’t give up three shorthanded goals I don’t think and expect to win,” he said. “At the end I think you have to credit Calgary’s goalie (Mike Poulin), that was the difference. He made some saves; we had six or seven quality scoring chances in the first 15 minutes of the game and had nothing to show for it. We’re playing catch up the whole time when we could have had a lead… [There] are bad plays that kept coming back to haunt us and we kept throwing gas on the fire.”

Things started innocently enough; the Roughnecks broke open a 2-2 late in the first quarter before taking a 5-2 lead early in the second. A pair of goals from Hickey kept the Rock in it but they trailed 7-4 at the half.

Rose tried to take matters into his own hands to start the third with a long pass to Rob Marshall for a Toronto transition goal but the excitement was short-lived as Calgary rattled off three in a row to build a 10-5, and then a 10-7 lead after three.

Dickson scored a pair to start the fourth. Hellyer added his second to make it 12-8 but Bell replied six seconds later off a face-off, killing any chance of momentum for the home team. Colin Doyle added one before Hellyer brought the Rock within three at 13-10 with his hat trick goal, but even with Rose pulled the Rock couldn’t muster any offense in the last six minutes of the game.

Malawsky was happy with his transition but was quick to point out that the win was a team effort.

“Tyson was good, I thought Karsen was good but it’s not always a direct goal. You have to look at the by-product of how these guys score, it’s everyone else getting up the floor,” he said. “We tried to run on their offense, tried to get the ball down the other end and if anything take some wind out of their sails for the next offensive shift. Everybody ran as a unit, everybody ran together, so it was a good transition game on the power play.”

Also scoring for Calgary was Dane Dobbie, activated from the IR, with two goals and three assists. Tyler Digby, and Wes Berg each had one goal and two assists. Jeff Shattler, Dan MacRae and Reilly O’Connor had four assists each. Josh Sanderson and Kasey Biernes also had goals for Toronto.

The Rock face the Vancouver Stealth Sunday afternoon at 3:00pm when they will look to rebound from Friday night’s loss.

“We have to look after the ball a lot better than we did tonight,” Lovell said in talking about preparation for Sunday. “I don’t think that we did that, and that resulted probably in more transition than we wanted to give up, and certainly some goals in our net.”