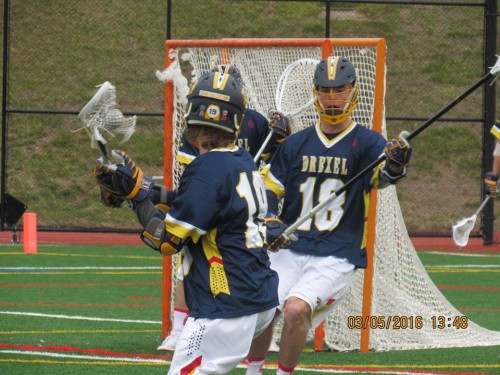 The game was a typical battle Philadelphia style between the two clubs that are only separated by a few miles.  It was a battle for the full sixty minutes.  At half time the game was tied at four with both teams getting some good offensive looks and shots on goal.  Both, Jimmy Joe Granito (Drexel-11 saves) and T.J. Jones (St.Joe’s-9 saves) kept the opponents at bay.

The second half was much like the first, and it wasn’t until 5:25 that Will Manganiello gave the Dragons the lead after a nice feed from Robert Frazee.  No more the 1:06 later Drexel increased the lead as Jacob O’Donnell put one in for a two goal lead.  St Joe’s wasn’t worried as they battled right back with a run of their own starting with goals from Kevin Reidinger at 9:02 and Kevin Forster at 13:10 to start the final stanza tied at six.

The Hawks five goal run would continue into the final quarter, as before the Dragons could know what hit them they would see the Hawks go up 9-6 with 9:52 remaining.  Drexel would immediately call a timeout to regroup.  After the time out, Drexel started to gain some momentum with offensive pressure, but the Hawk defense was stubborn.

Then at 8:44 Joe Rainoldi would cut the lead to 9-7, and twenty four seconds later the hero Matthew Varian would score the first goal of his day to cut the lead to 9-8, forcing the Hawks to call a timeout.  Both teams would again put offensive pressure, but both defenses came up huge.

With just 1:52 to go in regulation, Cole Shafer would pick up a huge ground ball and call a timeout.  After the restart, Joe Rainoldi would tie the game at nine causing an eruption from the Drexel contingent, while silencing the St. Joe’s fans.  But as we know, when two city teams get together the best is yet to come.

The Hawks would get possession off the face-off and bring the ball over the center line and call their timeout.

But a costly turnover and key ground ball pickup by Robert Frazee had the Dragons on the attack with :32 remaining, two shots by Will Manganiello and Marshal King  were blocked, but Matthew Varian netted the game winner just as the clock struck zero.

Earlier in the week, Freshman Marshal King will represent his country as he was selected to the Canadian National Team to play in the U19 (FIL) Federation of International Lacrosse Tournament.  Congratulations Marshal on this honor.

Maryland has lost their last two games both on the road.  They fell to Yale 8-5 and this past weekend lost to the Fighting Irish of Notre Dame 9-4.  No doubt Coach Tillman will have his team ready for their trip to Philadelphia.