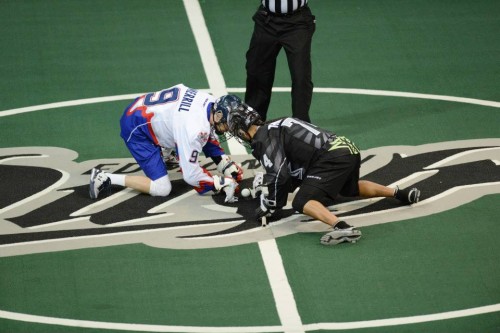 Are faceoffs important in the NLL?  The answer is yes… and no.  Faceoffs determine initial possession of the ball. However, they do nothing to keep possession.   Furthermore, possession does not equate scoring; that is dependent on several factors including accuracy of the shooter and the skill of the goaltender.   The slight increase in possession increases the scoring chances but is no guarantee.  So, where winning the faceoff and the slight edge in possession can help, it does not mean that the team dominating in the faceoffs will win.

The standings, however, looked different.  The West finished the season as Edmonton, Colorado, Calgary Vancouver.  The East shook out as Toronto, Rochester, Buffalo,   Minnesota, New England.  Toronto, with the lowest faceoff percentage, ended up as a first place team.  Buffalo, which led in faceoffs, finished in the middle of the pack.   Edmonton, the team third in faceoffs, walked away with the Champions’ Cup.

Of the teams that made the playoffs, only Buffalo and Calgary had a FO% of greater than 60%.  Average FO% is 52% individually, meaning that a team’s faceoff specialist would win roughly half their draws.   Teams averaged a faceoff percent of .448, indicating that they would begin with possession just under half the time.