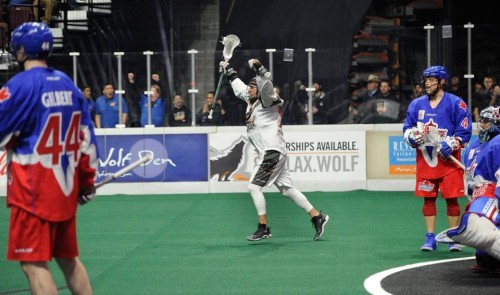 Win or lose, the Toronto Rock played their best game of the season on Sunday.

Their strongest effort of the season saw the Rock go down 17-16 in overtime against the New England Black Wolves at Mohegan Sun Arena. The Rock now sit in last place at 0-6 while the Black Wolves improve to 4-2 and sit tied for first in the East.

For Toronto, the game featured the return of Josh Sanderson and Jesse Gamble. Their presence and confidence on the floor were obvious as the Rock held the lead twice in the game, and if not for some late game heroics by Shawn Evans, they could have won. Gamble had two breakaway goals and was a welcome addition to the transition. Sanderson had a goal and three assists and his leadership on the floor proved calming to the streaky Rock offense.

Evans racked up 11 points with six goals and five assists including the game tying goal with just six seconds left in the fourth quarter. He also assisted on Kevin Buchanan’s game winner :49 into the extra frame.

Evans opened the scoring 1:49 into the first quarter after the Rock held a nearly minute long opening possession without scoring. By the end of the quarter the Black Wolves were up 4-2 with the Rock struggling to hold on.

The second quarter saw a reversal of fortunes with Toronto outscoring the Black Wolves 5-4. Stephan Leblanc tied the game at seven but Kevin Crowley put the Wolves back on top 8-7 just 21 seconds later.

Four goals per team were scored in the third with Toronto getting the first and last two. Evans had a natural hat trick in a span of 2:17. The third ended 12-11 in favour of New England.

The fourth quarter saw tensions start to flare with summer teammates Brock Sorensen and Pete Rennie, in his first NLL game, get into a shoving match. The teams traded goals until Toronto went on a three goal run to take a 15-14 lead at the 9:40 mark. Pat Saunders tied the game at 12:49 before Leblanc put the Rock ahead 16-15 with 18 seconds left. Some hard work on the faceoff by Ryan Hotaling (that saw him end up on the Rock bench after some shoving) gave the Bandits possession and Evans made it 16 all and sent the game to overtime with just seven seconds left.

Rob Hellyer continued his strong play for Toronto with nine points and Leblanc looked like a man on a mission with his four goals with his rocket of a shot. Brett Hickey contributed three goals and Colin Doyle two. Kasey Biernes had one. Toronto rookie Turner Evans, playing his first game against his superstar cousin Shawn, finished the game with one assist.

Saunders and Crowley had four goals each for New England, with Jordan Hall and Sheldon Burns contributing one each.

Both goaltenders were great, with Brandon Miller making 41 saves in the Toronto net and Evan Kirk stopping 28 for New England.

Even though it’s another loss amid their worst starting record ever, the Rock have to feel, if not good, at least okay, with today’s game. Today’s loss felt more run of the mill than depressing. They’re getting closer to figuring out how to win again. It was a great effort and everything clicked for maybe the first time all season, but they ran into a hot goaltender and Shawn Evans. More efforts like today and fewer matches against the MVP and the wins will come. Their next test is Friday at home hosting the Buffalo Bandits.

For the Black Wolves, they just need to keep rolling. In their second season in the league they’re tied for tops in the East. Evan Kirk is on a hot streak and they boast three of the most effective players in the game in Evans, Saunders, and Crowley. Next for the Wolves is February 28 at home to Georgia.