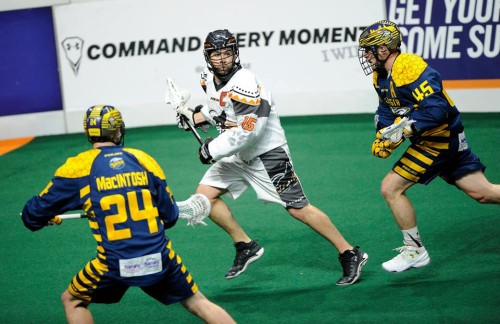 For the first time in 15 years, the New England Black Wolves franchise has won a playoff contest.

The last time the organization had won in the postseason was in 2001, when the team was still the Philadelphia Wings. After having the worst record in the NLL in 2015, New England emerged as a top contender in 2016, and will now move on to the eastern conference finals.

Shawn Evans gave the Black Wolves the 14-13 victory over the Georgia Swarm from Mohegan Sun Arena on Friday night to advance to the second round to face the Buffalo Bandits.

“It’s a huge win for us, because we didn’t play well,” New England head coach Glenn Clark said to the media after the game. “We had some pretty bad breakdowns, uncharacteristic, outside of our principles. Sometimes, you have to learn how to win in the playoffs and that was our one-off. We made some mistakes and got away with it.”

In overtime, Georgia defense Joel White tore down Black Wolves forward Kevin Crowley in the crease to give New England a power play. Evans picked up a loose ball in the slot and he fired a shot past Swarm goaltender Brodie MacDonald. It was his fourth goal on the night. Evans missed the last game of the regular season against Rochester with an upper body injury and was a game time decision.

“We’re moving on to the next game,” Evans said to the media after the game. “I’m a little tired right now. I spent the week basically resting up.… I thought I wasn’t playing all week, to tell you the truth. [Friday] I felt better than I did all week. I felt good enough to go.”

New England had a four goal lead late in the third quarter, but a four goal run from Georgia in the last two minutes of the third closed the gap to tie the game. Georgia lead 12-11 going into the fourth frame.

Georgia tied the game with less than six minutes left in the fourth after Kevin Buchanan scored two tallies early in the period to give New England the lead. The last few minutes of the game remained deadlocked, sending the contest to overtime before Evans was able to score.

Along with the strong showing from Evans, Crowley also had a four goal, four assist game for New England. Evan Kirk made 53 saves in net for the Black Wolves, facing 66 shot attempts from the Swarm.

New England advances to the eastern conference finals to face the top seeded Buffalo Bandits. The first game of the two game series will be Monday, May 16 from Mohegan Sun Arena. The game is the first ever Monday tilt in the history of the NLL, and is due to the arena being booked by events the entire weekend.

“They [Buffalo] are a good team, they’ve been tough on everybody,” Clark said. “We’re going to have to deliver better [than the game against Georgia]. This was a learning process for this group. Every team goes through it. You need to learn how to win in the regular season and then the playoffs. It’s a different animal.”

The scheduling could pose potential problems for players, who do not play lacrosse full time. Several players have full time jobs away from New England, and Buffalo, and the timing could affect availability.