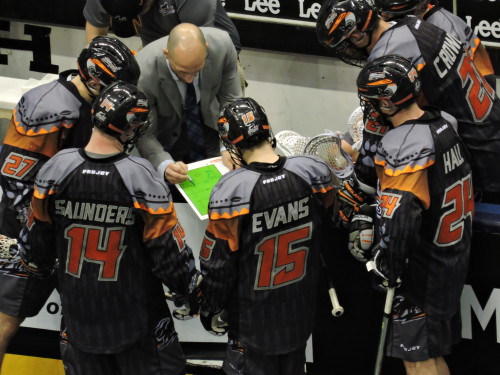 Well, no Toronto players were injured on Saturday night, but not much else went right for the Rock against the New England Black Wolves at the Air Canada Centre. The Rock went down 14-10 to the Black Wolves, winners of two in a row after defeating the Saskatchewan Rush the night before. The Rock remain tied with Georgia for fourth place in the East.

It was a tough test for Toronto to play against one of the best teams in the league. New England has nine wins compared to the Rock’s four, and the Black Wolves offense is heating up while the Rock’s is cooling down. Goaltender Evan Kirk has been phenomenal lately and backstopped the team to a come from behind victory on Friday. The Rock have lost more players to injury than anyone can count and although the team maintains it’s not an excuse for the mounting losses, it’s clear (and perfectly reasonable) that they are struggling.

“There were some deflating swing plays earlier in the game that we just weren’t on the right side of,” defenseman Brodie Merrill said after the game, “so we didn’t feel like we had that emotion coming into the game that we needed. I think that we were just kind of fighting it tonight. We rallied a little bit at the end but it was too late.”

A day after learning that captain Colin Doyle will face season ending surgery for an injury sustained away from the game, the Rock were running short of bodies on Saturday. Defender Rob Marshall dressed but spent the whole game on the bench, too banged up to play, so the Rock had only 15 available runners. Head coach John Lovell remarked that Sandy Chapman, who sat out last week, probably shouldn’t have played but “he did because he’s a character guy, and now whether he’ll be able to play next week, that’ll be another thing.”

Lovell says that his team continues to play hard despite their circumstances.

“I’m not sure how much chemistry or settling in you can have when you have 10 guys hurt,” he said. “It wasn’t an excuse, we haven’t made it an excuse. We played hard. We thought we had enough guys to get the job done but when you’re playing shorthanded and you have the type of team we have now you can’t do things to hurt yourself. I don’t think we looked after the ball particularly well and you can’t take bad penalties especially against a team that has a hot power play. I feel [New England has] one of the best offences in the league—they have a really balanced attack, they have six guys that really contribute in a lot of different ways, and they play a good team defense. Evan Kirk’s been giving them some good goaltending. They’re where they are for a reason, they’re winning close games.”

“I don’t think we killed any (penalties) off, that was the difference,” he said. “We didn’t kill any off and sometimes those dumb ones are hard to kill and I thought we took some undisciplined penalties. Sometimes they’re penalties of effort but tonight I don’t think we took very good penalties.”

The Rock were three for seven on the power play while the Black Wolves went five for seven with one shortie and did a great job containing the Rock power play, which, coming in to the game, was second in the league at 55.7 percent.

Merrill, one of the few defenseman who hasn’t been injured this year (knock on wood), said the remaining d-corps isn’t yet nervous when out on the floor (either in terms of being afraid of being injured themselves or of facing a strong opposition).

“It is difficult when you have so many guys through our lineup with so many injuries just for continuity and chemistry but we never want to use that as an excuse and in fact we’ve tried to kind of rally behind that,” Merrill said. “I think maybe there were a little bit of nerves situationally, for where we are in the season and really needing this game tonight. It’s unfortunate we didn’t respond better.”

Defenseman Billy Hostrawser sat out his first game of a three game suspension and his toughness on the floor was a missing key element. Hostrawser can often provide a timely hit or at least a spark, which was something the Rock desperately needed as Kirk effectively shut down Toronto’s scoring core.

Rob Hellyer (2-2) and Kasey Biernes (3-1) were held to four points each while Stephan Leblanc only had two goals and one assist. Turner Evans stepped up offensively with a goal and three assists. Brodie Merrill and Kevin Ross also chipped in goals.

Toronto and New England combined for 121 shots in a busy game for the goaltenders. Kirk was the more solid tender on the night making 50 saves. Nick Rose wasn’t as steady in the Rock net, letting in a couple softies but in the end stopping 47. Late in the fourth, he was fooled on a behind the back shot from Shawn Evans that slipped between the three inches between Rose and the post. To be fair, no goaltender in the NLL would have stopped that shot.

“Shots are usually related to time of possession so talk about some of those swing plays, and I thought they out loose balled us tonight,” Merrill said. “They did a good job on their faceoff team too, those little battles within the game add up to more possessions and I think that’s why you see the shots we gave up.”

Evans led the Black Wolves with two goals and five assists. Pat Saunders had a hat trick and two assists, and Kevin Crowley had a hat trick and one assist. Other New England goals were scored by Ryan Hotaling, Zac Reid, Jordan Hall, Brett Bucktooth, Kevin Buchanan, and Sheldon Burns.

Evans was happy with the win and the team effort.

“Right now we’re playing good lacrosse and everyone’s buying into the system, everyone is playing well and we’re moving the ball quick and we’re having fun,” he said. “We’re putting the ball in the net as everyone’s moving that ball around finding the open spaces. No one’s trying to do too much on their own, and if you look at the defensive end, Kirky’s making great saves, timely saves and allowing our offense to have chance to get up in games.”

The Rock are off until Friday when they host the Buffalo Bandits in their final regular season home game. The Black Wolves also play that night in Georgia.