Photos and story by Josh TruaxÂ

Well folks, it’s that time of year again. The National Lacrosse League may be deep into its long offseason, but for its loyal followers, the end of July means one of the most unique fan rituals to be found in any sport: The annual Fann Cup tournament, where teams of fans representing current – and sometimes even former – NLL clubs take to the turf themselves, in a day-long tournament for fun, camaraderie and charity.

This year, for the first time, the tournament (whose name, as you might have guessed, is a play on Canada’s Mann Cup) comes to Minnesota, specifically the National Sports Center complex in Blaine, about 20 minutes northwest of the Swarm’s “Hive” in St. Paul. The Stingers team, representing Swarm fans, has done a fabulous job of putting this event together, to raise money for PawPADs (which provides assistance dogs to people with disabilities) and Lax 4 Life (an organization dedicated to reintroducing the ancient sport to Minnesota’s Native American tribes).

Here is a collection of images from the 2012 Fann Cup: 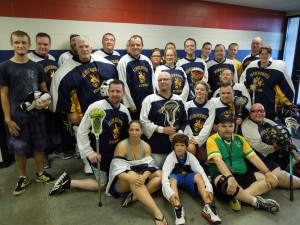 Â Â The Stingers, the Fann Cup host squad, representing fans of the Minnesota Swarm. The Stingers did a bang-up job organizing this year’s tournament. Inside the rink, alas, was a different story. 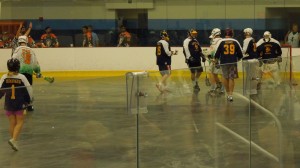 Â The Cloverz, representing the dearly departed Chicago Shamrox franchise, score the tournament’s first goal against the Stingers… the first of many they would tally. The Cloverz, as it turns out, have a few ringers on their roster, with experience in college lax and/or the MILA’s Chicago Outlaws. 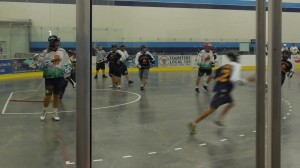 Â The home team put up a valiant fight, but would, alas, fall to Chicago in the opening game by a score of 5-0. 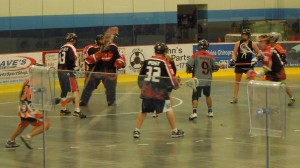 Â The second game of the day matched up the two combined squads in the six-team field: The Buffadelphia Wings Brigade vs. the Roadietutes (a merger of the Rock Roadies and the at-large Lacrosstitutes). These squads were, for varying reasons, unable to field full rosters on their own for this year’s event, so they joined forces. 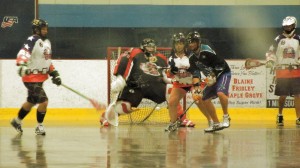 Â The third game pit the KrewHawks, representing the NLL champion Rochester Knighthawks, against Spirit Lacrosse, another at-large squad, which also included members of the Beantown Brawlers, representing the once (and future?) Boston Blazers. 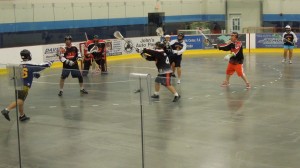 Â Later in the day, the Stingers take on the Roadietutes. 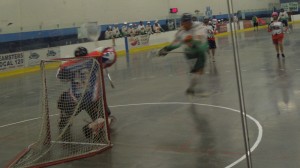 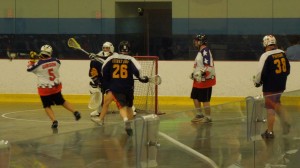 Â Spirit Lax may not have had the best team out there, but they sure did have the best jerseys, which feature elements of the U.S., Canadian AND Haudenosaunee (aka Iroquois National) flags. 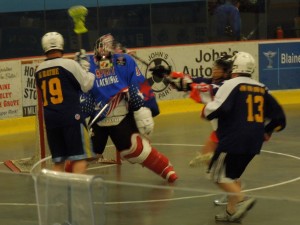 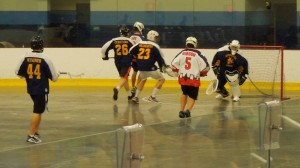 Â Meanwhile at the other end of the rink, Stingers goalie Steve Jensen does likewise. 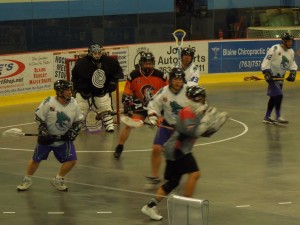 Â In the final round-robin matchup, which amounted to a championship play-in game, the KrewHawks and their goalie (with a big target on her chest) withstand the Buffadelphia onslaught to secure a spot in the final. 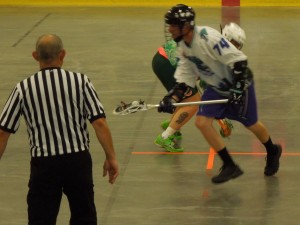 Â As the day progressed, it became clear that the two strongest teams among the six present were the Cloverz and KrewHawks. So, it surprised few people that those two teams met in the championship final. 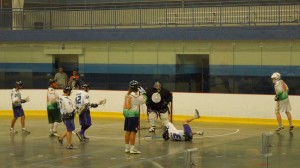 Â With the title on the line, the Cloverz play for keeps – as John “KHawksFan” Donnelly found out the hard way. Donnelly was shaken up on the play, but left the rink (and later came back) on his own two feet. 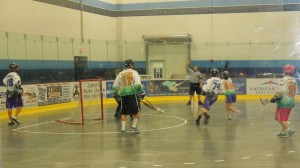 Â Alas, the Champion’s Cup/Fann Cup double was not to be for Rochester, as the KrewHawks fell to Chicago 5-3. 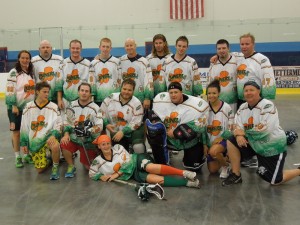 Â Your 2012 Fann Cup Champions, the Cloverz of Chicago. Now if we can just get an actual NLL team back to the Windy City too…