It seems like so long ago that the unfamiliar green and white were cutting down the nets of their hard work and pride after a blowout win over crosstown rival Maryland. Leading that attack was the dark horse, number twelve Eric Lusby. How can a player that scored 54 goals while still racking up 17 assists be a dark horse? Eric Lusby wasn’t even considered in the MLL Draft, being passed over by all eight teams, including by two expansions. His junior year at Loyola, Lusby had to cut his season short after tearing his ACL after just two games into the season, earning him a medical redshirt. Due to the timing of the MLL Draft, Loyola was still being determined as a legitimate contender, or just a Lafayette repeat (couple years ago, starting out undefeated but missing the tourney). No team wanted to take the chance on Lusby who was an average man up attackman freshman and sophomore and year and mostly known for being a one hit wonder for his outside shot while still 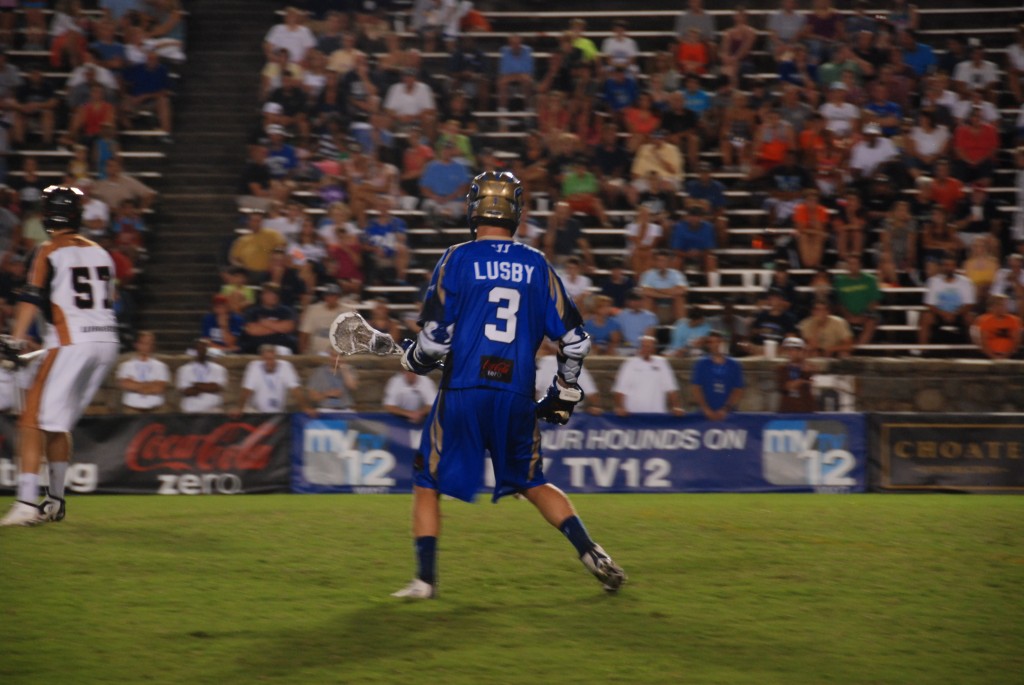 Â having a lack of ball control. The top player on the team that won the NCAA championship graduated with his Major in accounting, but was left without a summer job. The Charlotte Hounds, being known as an one win laughingstock in the league, picked up Lusby off of waivers on July 17th in hope of adding some depth to their attack. After losing to Denver and Rochester by a combined score of 35-12, the Hounds tried Lusby out for the first time in limited minutes against Long Island. The game still ended in a 13-9 loss, but Lusby scored his first MLL goal ever and gave a spark off the bench the desperate Hounds needed. Already out of the playoffs, the Hounds wanted to win for a packed American Legion Memorial Stadium, as well as be a spoiler for the Rattlers who were on a tightrope to make the playoffs, needing a win to get in. The game started with number three running out onto the field, at a spot wear fan favorite Billy Bitter usually started, only Bitter was on the sideline, causing all the fans to check out their programs to see who on earth was starting. It didn’t take long. With Bitter at midfield, Lusby scored three goals in the first half. The ball control problem everyone spoke of was no longer a problem, Lusby didn’t need help and scored two unassisted goals driving to the cage by himself. After taking home the 15-14 win to please a great turnout crowd, the MLL awarded Lusby rookie of the week after his first ever start.

Next year the Hounds will still have Matt Danowski and Jeremy Boltus, and a young player who has started one game compared to Danowski who has 102 career goals is nothing to compare. Lusby brings youth and a future to a roster full of young talent in Ryan Flanagan, Jovan Miller, Josh Amidon, and Billy Bitter. The sky is the limit for Eric Lusby and the rest of the Charlotte Hounds next year.