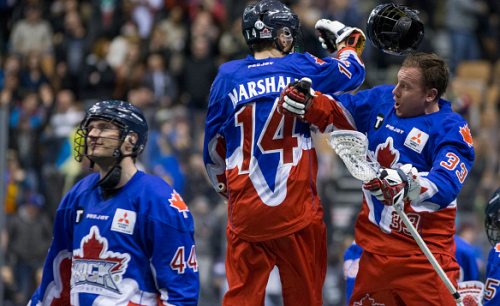 Tonight the New England Black Wolves (4-9) cross the border to face the Toronto Rock and former players Kevin Crowley and Garrett Billings will face their old teammates and friends.

Both teams are headed in different directions.  Toronto already clinched a playoff spot and is now playing to win the NLL East. While the Black Wolves are fighting for their playoff lives.  With five games remaining they are at a point of winning out and needing Buffalo to lose 1-2 games.

They sit 3 games out of the final spot, and this is the only silver lining.  New England has 2 games in hand over Buffalo, and they play them last 2 weeks of the regular season. Is it a long shot, Yes.  Impossible, No.

The Rock had some rough times a few weeks ago but seemed to get back on track with a 14-7 win over Vancouver. Reports earlier this week are stating that Colin Doyle could be in the line up in one of the two remaining regular season games.  Add Rob Hellyer possible return to this already potent line up and it could spell trouble for the rest of the league.

In his first two games as a Rock, Kevin Crowley has registered 4 goals and 5 assists, with his break out game last week as he posted 3G/3A.  There is no doubt tonight there will be some feelings going against former mates, but deep down Crowley wants to post a huge number against his former team, and the same can be said for Garrett Billings.

In three games for the Wolves, Billings has 3G/10A, and is fitting right in.  The problem here is, not enough consistent scoring by other players.  The Black Wolves are about 2-3 deep after Billings in scoring, while Toronto goes 5-6 deep.

Pat Saunders who leads the Wolves with 52 points would be 7th on the Rock roster, just 1 point ahead of Kevin Ross who has 51 points for the Rock.

New England has gone through a number of team turnover last few years (Philadelphia), and when you continue to turnover 10+ players a year, you will never have a team consistency.

New England will have to come out strong and score early and often.  In there only other meeting on February 20th the Wolves fell 13-12 in overtime.  New England had a 10-7 lead going into the final quarter until Toronto outscored them 5-1 to take a 12-11 lead.  Kyle Buchanan tied it with 1:08 remaining, but Josh Sanderson won the game :40 into the extra period.  Since that game the Rock have gone 5-3 and Wolves have gone 2-5

Both teams have something to play for..    Can the Wolves pull the upset?  Sure…  It wont be easy, but it can be done.