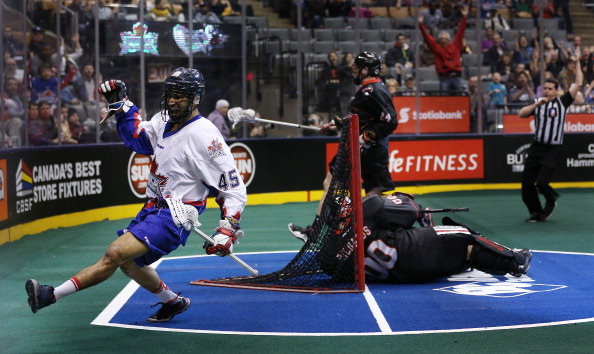 After not scoring a goal in last week’s loss to Rochester, Brett Hickey made up for it in a big way by scoring a new team record 7 goals in the Rock’s (12-4) convincing 14-7 win over the Vancouver Stealth (4-10) at Air Canada Centre in Toronto on Friday night.

“I didn’t even know,” Hickey told the Air Canada Centre crowd after being named the game’s first star and being informed that he had set a new team record with his 7 goal performance. “Last week they weren’t dropping for me, but tonight they did.”

The Rock offence had difficulty starting the engine in the opening 15 minutes. Vancouver built a 3-1 lead before Hickey connected on a low-to-high outside rip with just 32 seconds left in the first quarter to make it a one-goal game, 3-2 after one.

Toronto rattled off three more goals to begin the second quarter with Hickey scoring two of them. Vancouver got one back, but it was again Toronto scoring three in a row to finish the half on a 7-1 run, leading 8-4 at the half. Hickey added his fourth of the first half and it was also his 40th goal of the season.

Vancouver opened and closed the third quarter scoring, unfortunately the Rock had another three-goal run sandwiched between the Stealth’s solo markers. Eric Penney returned to the Stealth goal to start the second half after being pulled late in the first half.

Once again, three straight goals by the Rock made the lead too much for the Stealth to overcome in the fourth quarter.

Nick Rose went the distance to improve his record to 6-2 on the season and made 40 saves. Penney allowed 12 goals, while Cody Hagedorn allowed just 2 goals in the Vancouver net.