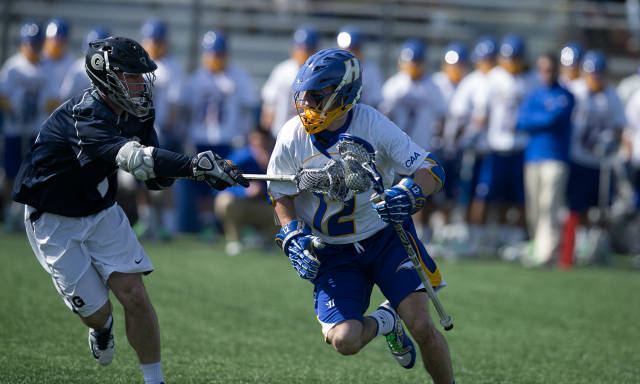 An 8-5 victory against 20th-ranked Ohio State Buckeyes was what the Hofstra Pride needed after losing to Georgetown the previous week. Head coach Seth Tierney knew how important the victory was for Hofstra.

“It’s not an easy game to win. They’re a Big Ten team with some guys that are big, strong, and fast and play a canadian-like offense but defensively, we were up for the challenge. It goes back to one week ago. We didn’t really show up and play against Georgetown and it was one of those days. We took the bounce back after a blue-collar week, getting after it on Monday and Tuesday and really game planned those guys.”

From early on in the game, both teams knew it was going to be a game where defense dominates. Brian Von Bargen got the Pride offense going with a goal a little over two minutes into the game. The Buckeyes responded with a goal from Jack Jasinski, and that would be all the scoring for both teams in the first quarter.

Hofstra opened the second quarter with Korey Hendrickson’s fifth goal of the season. Josh Byrne added a goal to his stat line and extended the Pride’s lead to 3-1. Ryan Hunter scored a goal for the Buckeyes to keep them within striking distance going into halftime.

The Pride would dominate the scoring in the third quarter. They were given a man-up opportunity early in the second half after the Buckeyes was assessed their fifth of eight penalties in the game, and Von Bargen took advantage, putting his team back up by two goals. Hendrickson again contributed to the effort with his second goal of the game and added to Hofstra’s two-goal lead while rounding out the scoring in the third quarter.

A sense of urgency came over Ohio State and their offense was rejuvenated, totaling three goals, one each from Hunter, Eric Fannell, and and Austin Shanks. Unfortunately for them, Von Bargen, Byrne, and Trevor Kupecky each scored a goal to neutralize the comeback effort.

Hofstra ended their four-game homestand 3-1 and stand at 4-1 on the season. Their next game will be at Kenneth P. Lavalle Stadium on Tuesday, March 15th where they take on their in-city rivals, the Stony Brook Seawolves. That game is scheduled for 7 PM.