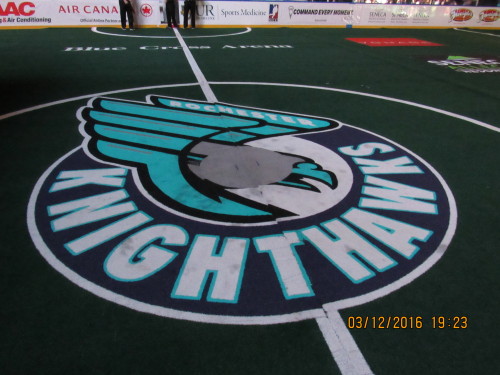 This past weekend the Rochester Knighthawks (5-5) could not afford to lose both games.  Friday night they fall to the Bandits (7-4) on Johnny Tavares Night 13-10, so they game Saturday versus the BlackWolves (5-4) was even more of a desperation win, which they did in com from behind fashion 17-13.

As the first quarter ended, the Knighthawks were buried in a hole that nobody thought they could get out of as they fell behind 6-1, and they also were without the services of Dylan Evans who received two 5 minute majors and a game ejection in only 10:48 of playing time.

When the second quarter started it seemed a new Knighthawk team showed up.  Rochester scored four times in the first 3:13 to cut the lead to 6-5.  New England would increase the lead to 8-6 before Rochester would go on another four goal run to end the half leading 10-8.

We started the third with Brett Bucktooth cutting the lead to 10-9.  We would then see nine minutes of up and back action and stellar goaltending by both teams until Kevin Crowley and Shawn Evan would score :47 apart to give the Blackwolves an 11-10 lead, but once again Rochester would go on a three goal run to end the quarter and take a 13-11 lead.

The fourth quarter was again up and back action.  Rochester would score first at :24 with Stephen Keogh getting his sixth goal of the night to increase the lead to three.  But it seemed whenever New England would score and try to get a run, the defense and goaltending would be huge for Rochester as they would alternate goals until the Knighthawks would score the final two of the contest for a 17-13 win.

With the win Rochester is now only 1.5 games out of first and a half game out of second. Both these teams meet three more times this season.  Next time they meet it will be a home and home matchup on March 25th  (@New England) & 26th (@ Rochester).   If this was a preview of the next three meetings, lacrosse fans not only in these cities are in for a treat, but lacrosse fans in general will not want to miss this action.