In the early stages of a professional sport, it is common to see duopolistic competition. First it was the AFL and NFL, then the ABA and NBA. Now, we have Major League Lacrosse and the LXM Pro Tour. Although it is the Tour that provides an ABA-esque flash, it is MLL that has attempted to revolutionize the game with its 2-point line.

Everyday I wish that Tour players like Kyle Harrison, Sam Bradman and the Brattons played in MLL. However, I do respect and appreciate the work the Tour does to grow the game. [If you aren’t sold on it yet, read this piece by Chazz Woodson.] Until recently I have been a MLL snob. I was positive that the 60-second shot clock and the 2-point line were steps forward for the sport. Then I read an interview with LXM midfielder Brendan Porter in which he called the 2-point line “gimmicky” – and it made me absolutely furious.

Gimmicky?! GIMMICKY?! How dare you say that, Brendan Porter!

Eventually I cooled down, but I never forgot that line. Then, as I watched MLL games throughout the summer, I actually started to second-guess myself. Part of me began to believe that Porter was right.

Gimmicky is defined as “a device employed to cheat, deceive, or trick.” Well, that’s not accurate. The 2-point line is not intended to trick teams; everyone can see it and everyone can use it. Here’s another definition: “an innovative stratagem or scheme employed especially to promote a project.” Well, duh. It’s supposed to make the league more interesting, so this definition is accurate and acceptable.

Here’s the one definition of gimmicky that scared me: “a significant feature that is obscured or misrepresented; a catch.”

Misrepresent – that’s the word for the 2-point line in so many ways. Goals from beyond the arc are extremely infrequent; there are only a handful of players who can shoot them. Scoring a 2-point goal requires great ball movement, good shooting and [most of all] good shot-selection. Good looks at 2-point goals are rare – too rare. As a result only a few 2-point shots are attempted each game, making them an insignificant aspect of the game.

Take a look at these charts. The first shows the [weak] relationship between 2-point goals scored and winning percentage. Each blue dot represents a different MLL team since 2006. 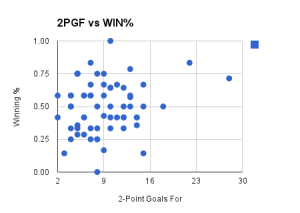 This next chart shows the correlation – or the lack thereof – between 2-point goals allowed and winning percentage. Some of the best 2-point defenses have finished below .500, while some of the worst have finished over .750. 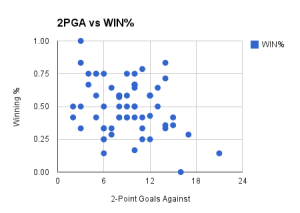 Next, look at 2-point goal differential. Are 2-pointers like turnovers in football? Does the winner of the battle beyond the arc win the game? 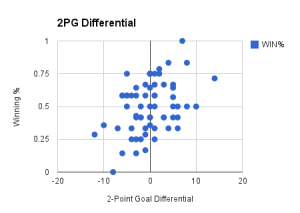 Not necessarily. While there is a stronger correlation than the previous two charts, it could be misleading. It is perfectly plausible that 2-point goal differential is nothing more than a weak instrumental variable for overall scoring differential and, in turn, wins.

Take the NBA, for example. Not every 3-point shot is created equally. Corner threes can be as close as 22 feet from the hoop; threes from the top of the arc are 23 feet, 9 inches away. This has given players like Robert Horry and Shane Battier the opportunity to specialize as “corner three” shooters. It has drastically enhanced the floor geometry of the NBA, and it would make even more sense for MLL. 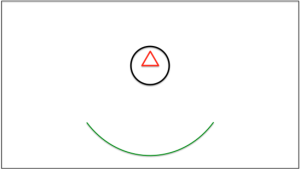 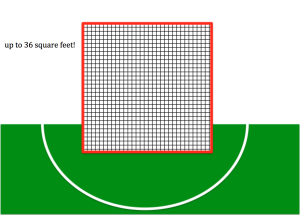 Currently there is no incentive to shoot from the corners of the lacrosse field (near the alley). While still 16-yards away from the cage, this area shows only 18 square feet to shooters – at most! 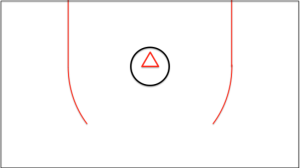 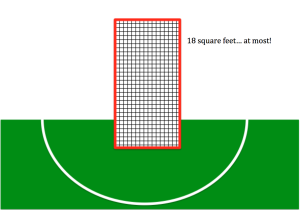 Here’s my proposal: Major League Lacrosse trims their 2-point line like the NBA has trimmed its 3-point line. The NBA does it out of necessity; a full arc wouldn’t fit comfortably on the court. MLL would be doing it to remove the misrepresentative nature of the arc. With a perfect 16-yard radius every shot appears equal; but due to angles, that is far from the truth. But what if those bad-angle shots were just a little bit closer? 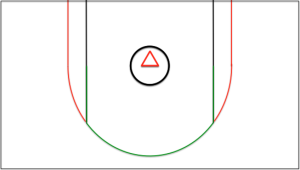 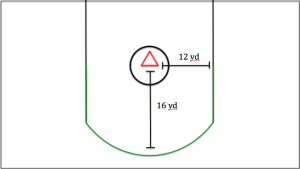 Look at that! Shooters can now rip 2-pointers from less-than-ideal angles without receiving an earful from their coaches on the sidelines. There are now three times as many locations to shoot 2-pointers with a realistic expectation of success. The field geometry of lacrosse is enhanced. Offenses are able to spread out, creating more 1-on-1 opportunities. Teams trailing by large margins have hope, and fans have more faith in the possibility of a comeback.

Will teams start hitting 2-point shots on every possession? Of course not. Although 2-pointers will seem less gimmicky, they’ll still be incredibly difficult to make. Currently there are only a few players who can shoot 2-pointers. It is truly an art. And I hope it’s an art with which Brendan Porter and other Tour players will eventually get on board.