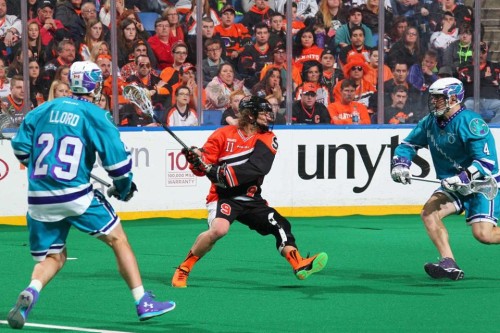 So far four of the six playoff spots have been secured. Buffalo & New England in the east, and Colorado and Saskatchewan in the west.  Colorado or Saskatchewan can clinch the # 1 seed in the west and receive a first round bye if either team sweeps their games this weekend.  Calgary and Vancouver are fighting for the third seed.  A Calgary win over Vancouver will clinch the final spot in the west.

In the east, Buffalo has a home & home versus Toronto.  A sweep of the Rock and a New England loss to Georgia will all but clinch the #1 seed in the east for the Bandits.

New England Black Wolves can clinch a home playoff game with a win vs. Georgia.

Rochester Knighthawks can clinch playoff spot with win vs. Georgia AND Georgia loss vs. New England AND one Toronto loss vs. Buffalo.

1—(2) Buffalo Bandits (10-4)  Bandits earned a hard fought 14-12 victory over Rochester to keep their one game lead.  This weekend is another home and home with a divisional rival.  A weekend sweep moves the Bandits closer to the east title for the regular season.   Friday night @ Toronto 8pm.  Saturday vs Toronto  7:30pm

2—(1) Colorado Mammoth (10-4)   Colorado had a chance to secure first place after the Rush lost on Friday. But is seems the Swarm had another idea as the Mammoth fell 17-10. Mammoth face off in a very big home and home match up that could decide the west.   Friday  vs.  Saskatchewan  9:30pm,  Saturday @ Saskatchewan 9:30pm.

3—(3) Saskatchewan Rush (10-4)   Rush started out quick on New England but could not hold off the Blackwolves as they fall 14-13.  Saskatchewan remains tied with Colorado for first in the west, and a pair of wins can vault the Rush to the division title.   Friday  @  Colorado  9:30pm,  Saturday  vs.  Colorado  9:30pm

4—(4) New England BlackWolves (9-5)   Fell behind early 6-1 after the first quarter.  But they regrouped  to a hard fought 14-13 win over the Rush Friday night.  On Saturday they traveled to Toronto and controlled the game from the start to cruise to a 14-10 victory and another weekend sweep of wins.  I said in December, “Do not sleep on the ‘Wolves”.  Last year 4-14, and now sitting at 9-5 with four games remaining.  Next Game:  @ Georgia   Friday  7:45pm.

5—(6) Calgary Roughnecks (7-9)  Another victory for the Roughnecks, this time over Vancouver 16-12.  Roughnecks can clinch the final spot in the west this weekend.  This is a team to worry about.  They are putting a series of wins together, mixing up lines.  They have known for weeks if they make the playoffs they will be a third seed, so no need to battle to the death..   Next Game: @ Saskatchewan  Saturday 9:30pm.

6—(5) Rochester Knighthawks (6-8)   A tough 14-12 loss to Buffalo all but destroyed any chance of Rochester moving to a # 2 seed in the east.  This Knighthawk team is a far cry from the 2012-14 championship teams.  Last season they lose to Toronto in the east finals, after winning game one, they lose game two and get destroyed in the mini-game.  Hawks look to get on track Saturday night  Next Game: vs.  Georgia   Saturday  7:30pm

7—(8)  Georgia Swarm (5-9)  Buzzed their way to a huge 17-10 victory over the Mammoth to keep their slim playoff hopes alive.  Two big games this weekend for the Swarm.  A pair of wins is what they need, anything less could spell the end of any playoff possibility.  Next Game:  vs New England Friday 7:45 p.m,   Saturday  vs Rochester 7:30pm.

8—(7) Toronto Rock (4-10)   Playing for nothing but pride now.  A 14-10 loss to New England was basically the sealer of any playoff chance for the Rock.  Not mathematically eliminated, they will need to win out and get a ton of help.  This weekend is not easy as they have a home and home with division leader Buffalo.   Next Games:  Friday night vs Buffalo  8pm (final home game of regular season).  Saturday @  Buffalo  7:30pm

9—(9) Vancouver Stealth (3-11)  Fell to Calgary 16-12 in a game they needed to win.  If the Stealth want to get into the playoffs, they must win the remaining four games while Calgary has to lose the rest of their games.  Next Game:  vs  Calgary  Saturday 10pm.