Since 2005, the average attendance per game in the National Lacrosse League has dropped from 10,236 to a meagre 8,981, only 11 more per game than the 16-year low the league experienced last season. Years upon years of teams choosing to relocate to smaller venues rather than trying to rebuild in places where there used to be success has put the league in a tailspin, losing momentum steadily, even as the rest of the sports world seems to be on a consistent upswing.

With the NLL now in its 30th season, it is presenting a well-established product to the world, yet it continues to flounder in many markets. New Commissioner Nick Sakiewicz has committed to growing the league and expanding by a few more teams over the next few seasons, but he and his staff have a monumental task ahead of him.

The only success story the league has had in recent years has been the decision to move the Rush to Saskatoon after years of mediocre attendance in Edmonton—in fact, if you take the Rush out of the 2016 attendance equation, the rest of the league’s average attendance has actually dropped to 8,678 per game. The Swarm, the Black Wolves neé Wings, and the Stealth have also bounced around in the last decade, but in every one of those cases, the move has made weak attendance into weaker attendance.

When the Rush relocated to Saskatoon last summer, many, myself included, considered this to be a gamble—they were taking a team out of a city with a million population from which to draw, moving them to a smaller building in a city with a quarter of the potential fan base in the hopes of somehow improving the team’s financial fortunes. 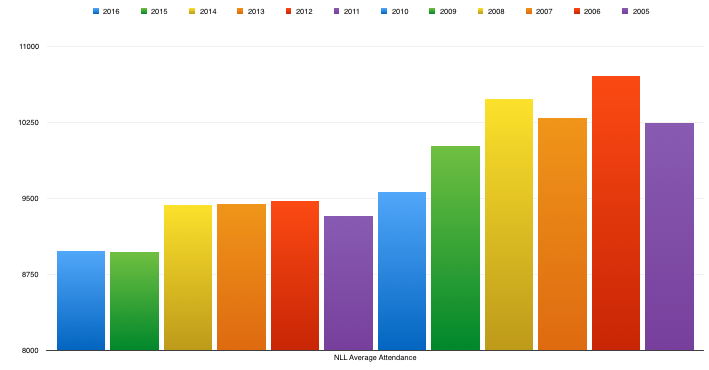 No doubt the move cut some costs by reducing rental expenses. Going from Rexall Place in Edmonton, with its top-dollar cost and two other tenants—the NHL’s Edmonton Oilers and the WHL’s Edmonton Oil Kings—to SaskTel Place, which is only home to the WHL’s Saskatoon Blades, would have drastically cut arena fees and also might have created better negotiation opportunities for a piece of concessions, etc. Additionally, with only a single professional sports team in the entire province of Saskatchewan—the Roughriders of the CFL—there was a potential fan base out there hungry to see more pro-level sports.

The Rush did draw pretty good crowds in their first few seasons in Edmonton when lacrosse was an exciting new thing to check out, averaging more than 10,000 per game for their first two seasons. But interest dropped off steadily as the team continued to languish near the bottom of the standings. By the time the Rush finally turned themselves into the league champion they are now, fans had long since lost interest and the team’s front office seemed either unable or unwilling to generate interest through promotion around town. In their last three seasons in Edmonton they were drawing just 7,045 per game and were among the bottom three in the NLL in attendance.

This year, with the change of province, the gamble has paid off in spades. As of this writing, the Saskatchewan Rush are averaging 11,326 fans per game, including a sellout, and have the third-best attendance in the NLL.

The story is not so rosy elsewhere.

The Swarm moved from Minnesota to Georgia last summer and their average attendance has dropped from 8,699 in 2015 to 4,815 this year.

The Black Wolves are averaging 3,824 fans per game in 2015 after drawing 3,914 last —even with numbers dropping rapidly in Philadelphia their worst season (2014) had 6,864 per game attendance.

The Stealth have been situated in three different home towns up the western coast so far and each has produced progressively worse attendance—from 2005-2009 in San Jose, they drew an average of 4,581; in Everett, WA from 2010-2013 that number dropped to 3,814; now in Vancouver—a lacrosse hotbed—they’ve only averaged 3,691 fans per game over the last three years.

In Minnesota and Philly, crowd numbers saw steady declines over the last decade, primarily due to having bad teams.

Between 2005-2009, the Philadelphia Wings were among the league leaders in attendance, never dropping their average below 10,000. However, Philly fans began to grow tired of watching their team get beat and from 2010-2014 they started shedding close to 1,000 fans per game, on average, dropping below 7,000 in their final year in that market. The move to the Mohegan Sun Casino has simply kept them on the same downward trend, although they’re finally back to winning games this year.

In Minnesota, the Swarm drew more than 10,000 per game in 2005, 2008, and 2009 but, like Philadelphia, consistently non-competitive teams began to ship away at that average. As their front office continued a policy of trading their best players for draft picks with lots of potential but without the skills to hang with the rest of the league, fans began to abandon the team. Although the fan situation never really got desperate (their 8,699 per game in 2015 was actually up by more than 1,000 per game from the 7,457 they drew in 2014), there were no signs of things getting better and the rent in Georgia is no doubt cheaper than paying to play in the Xcel Energy Center in Minny.

And then there’s the Toronto Rock’s fickle fanbase. The Rock won five championships in seven years between 1999-2005 and they were filling Maple Leafs Gardens and the Air Canada Centre almost to the rafters. But from 2006-2009 they didn’t make the Champion’s Cup and they lost 1,000 fans per game in each of those years, fans that never returned. By the time they finally won the Cup again in 2011 the average attendance had dropped all the way down to 8,513 from a high of 17,123 in 2005. Although crowds have stabilized since then in the 10,000 per game range, their numbers are now strictly middle-of-the-pack.

Apparently Torontonians don’t put up with losing, unless it’s the Maple Leafs….

The major professional sports make most of their money via lucrative TV contracts and no doubt, the NLL would love to get a taste of that action. However, you don’t get those big deals without being able to prove that people will be watching your product and that means getting fans in the stands. Lots and lots of fans.

Commissioner Sakiewicz was a big part of bringing legitimacy to Major League Soccer and he’s going to have to a lot of the same magic again if he’s to realize his goal of growing professional box lacrosse. One of the fundamental realities he’s going to have to address with top brass in the league’s front office and in team management is that settling for less and less is simply not an option. Taking a page from the Rush playbook, teams that are continuing to struggle to grow their fan base need to either find markets where they can start drawing in big numbers or maybe they need to get out of the way and let someone else try.