Earlier we took a look at the first member of the InLax Lacrosse League, the Winnipeg Prairie Dogs. Today we feature the second member of the league, the Minnesota Marauders! The Minnesota area has a growing lacrosse following thanks to the Swarm, and the Marauders hope to continue that success.

The Minnesota Swarm have helped lacrosse grow at an incredible rate at a youth level state-wide. The attendances have been very good at the Xcel Energy Center, the new home of the Marauders. It seats 18,000 so the Marauders are ready for growth!

The team’s primary and secondary logos were created by designer Micah Loyed, who also designed the Prairie Dogs set as well.

As for the players, the Marauders have an incredible group of forwards. The team’s first round pick, Adam Jones, was the NLL Rookie of the Year last season. He scored 33 goals and 51 assists in his first season out of Canisius College.

Joining Jones will be Rhys Duch, Ryan Ward, Rob Pannell, and Josh Gillam. Duch also had 33 goals last season for the Washington Stealth. He also added 46 assists as well. In the summer Duch also plays field as well for the Hamilton Nationals. Ward had a very good season this winter for the West champs Edmonton Rush with 29 goals and 49 assists. Gillam was drafted by the Swarm a few years back, but had other commitments. He stays in Minnesota after scoring 4 goals and 11 assists in 8 games. The team will have to wait one more season for Pannell who will be completing his final season at Cornell.

Steve Toll, Ryan Flanagan, and Cam Woods man the defensive unit. Toll returned to the NLL half way through the season with the Edmonton Rush and really made a difference in the team’s end of the season push. Flanagan, out of North Carolina, has had an excellent rookie season for the Charlotte Hounds of the MLL. Cam Woods is an experienced defender in the NLL who was named defender of the year back in 2004. He won a Champions Cup with the team in 2011.

Between the pipes for the Marauders is Washington Stealth goaltender Tyler 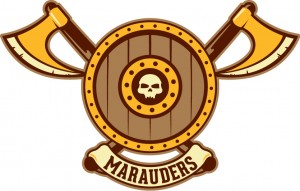 Richards. Richards has been in the Stealth organization since 2007 but did not play until 2009. That season he was named to the all-rookie team. He won a Champions Cup with the Stealth in 2010. In the summer he is the goaltender for the New Westminster Salmonbellies of the WLA.