The first team to be announced in the InLax Lacrosse League is the Winnipeg Prairie Dogs. Winnipeg is a relatively untested market for lacrosse, but has a very passionate sports fanbase. The Prarie Dogs will be playing out of the MTS Centre, home of the Jets.

Leading the Prairie Dogs is the team’s recently named captain, Chris White. White has been in the NLL for ten years, most of those with the Buffalo Bandits. White had previously served as the Bandits captain as well. Also on defense is Mike Carnegie, former Calgary Roughnecks defender.

On offense the Prairie Dogs have a good mix of young and old. Mat Giles and Kim Squire serve as the veteran leaders of the scoring squad. Giles had a very solid season for the Bandits this year, where Kim Square had a nice year playing in CLax. Corbyn Tao had 21 goals and 22 assists with the Minnesota Swarm this season, which has landed him a nice spot on the Prarie Dog squad. Winnipeg features one of the best groups of secondary scorers in the league, 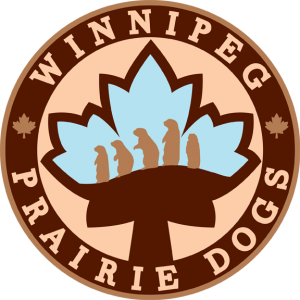 featuring names such as Matt Lyons, Dean Hill, Max Seibald, and David Earl. Winnipeg is hoping their balanced scoring will help them win the Western Conference.

Between the pipes for the Prairie Dogs is a young goaltender with a lot of potential. Frankie Scigliano played in 12 games for the Roughnecks as the backup goaltender. He finished the season with a 2-2 record. He was drafted in the second round of last year’s NLL draft. After a year backing up Mike Poulin he is excited to be the starter in Winnipeg.

Winnipeg is just the first team to be announced for the InLax Lacrosse League, but more will be coming soon. Up next we take a look at Minnesota, who’s logo was also designed by the talented Micah Loyed. Afterwards we will take a look at Loyed and his graphic design background. Keep checking back for the latest from our league that’s so in depth that its almost real!