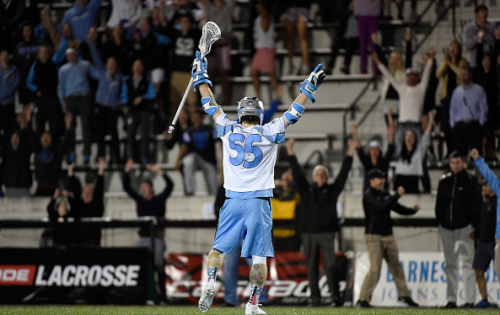 For just the fourth time ever, the Syracuse Orange were taken down in the quarterfinals of the NCAA Tournament. The story of the day for Hopkins was graduate student Eric Schneider. Schneider picked up 15 saves and has been on a recent “redemption tour” after getting torched several times early in the season. At certain points it looked like nothing would be getting past him as he made some phenomenal saves including several very impressive kick saves. On the opposite side, Bobby Wardwell had a very good game as well picking up 14 saves and allowing 16 goals.

The problem for Syracuse was not in cage, it was in front of the cage. We waited all game to see if the crease slide would show up, and I don’t remember seeing much of it. In fact the slides to the ball were almost non-existent or, at the very least, slow to arrive. I’ve been following this team for several years now, and I cannot remember a more unimpressive defensive unit.

The Stanwick brothers dominated today’s scoring for Hopkins. The duo combined for eight goals and four assists on the day and looked as impressive as they’ve been all year. As for the Orange, four Syracuse players finished with hat tricks including Kevin Rice who put up seven points.

With just over three minutes remaining in the game, the Syracuse Orange found themselves down 10-15. SU proceeded to go on a 5-1 run in the final 3:15 of the game, scoring the final three goals. The Orange pulled within one goal with just 23 second left to go, but could not stop fumbling the ball in its own defensive zone. At one point Wardwell and one of his defenders actually ran into each other going for the ball.

For a team that had a National Championship or bust attitude for most of the season, losing to a program rival in the quarterfinals is certainly not a good feeling. At the end of the day, it was a total defensive breakdown on the part of Syracuse. Hopkins moved the ball well offensively, and were able to get passes through the defense and on to the crease.

The Jays will go on to face the winner of Maryland-UNC next weekend in Philadelphia.