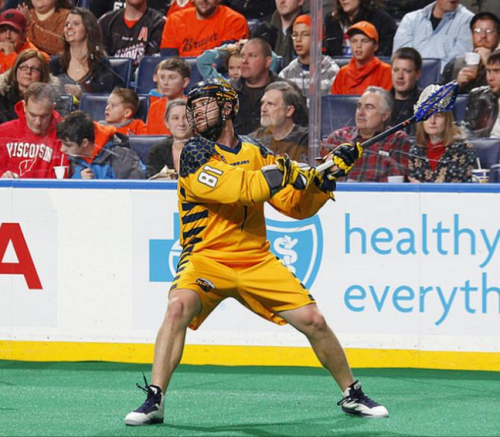 The Rochester Knighthawks made two moves at the Trade Deadline, acquiring lefty forwards Josh Gillam and Joe “Haodias” Maracle from the Georgia Swarm in exchange for a second-round selection in the 2018 NLL Entry Draft and Rochester’s highest third-round selection in the 2016 Draft.
“These are guys who we expect to come in and make us better,” said Knighthawks head coach Mike Hasen.
Originally selected with the 18th overall pick in the 2010 National Lacrosse League Entry Draft, Gillam has collected 25 goals, 41 assists and 101 loose balls in 30 games in four seasons with the Swarm. His best offensive campaign was in 2014, when he posted career highs in goals (13), assists (15) and points (28). This year, the 27-year-old forward has four goals and two assists in two games with Georgia.
“I am super excited about the trade and my future as a Knighthawk,” said Gillam. “It means a lot to have a team trade for you and make a push when they needed a lefty offensive guy. When I got into games in Georgia, I felt great and I am really excited to put forth that kind of performance for Rochester.”
The Peterborough, Ontario native has spent his entire junior and senior careers with the hometown Lakers. In the process, he won the 2006 Minto Cup and the 2007 Mann Cup with Peterborough. In 2008, he was voted a Junior “A” Second Team All-Star. Gillam finished his junior career with 108 goals, 90 assists and 198 points in 69 games. At the Senior “A” level, he has continued to have success, tallying 147 points in 58 games. In 2013, he finished eighth in Major Series Lacrosse in scoring.
“I was born and raised there and couldn’t imagine playing anywhere else,” said Gillam. “I live down the road from the arena and I have been looking at that rink since I was four years old.”
In Rochester, he will be reunited with Lakers Cory Vitarelli, and Brad and Scott Self.
“I am pretty excited to get in touch with them tonight,” said Gillam. “Even something simple as sharing car rides to the game and practices will be nice to have for sure.”
By dealing for Maracle, the Knighthawks add a former second-round pick to their left side. The Six Nations product was the 10th overall selection by the Swarm in the 2014 NLL Entry Draft. In his pro career, the 21-year-old has three goals and one assist in three games. His best game as a pro came against Rochester last season, as he scored two goals on May 2nd. Now he gets to wear the teal and purple of the Knighthawks.
“I’m excited to join the Rochester Knighthawks,” he said. “I would also like to thank the Georgia Swarm coaches and players for the learning experience.”
Maracle brings a championship pedigree to the Knighthawks, having won four titles at the junior level. In 2015, he was a member of the Six Nations Arrows and won his second straight Minto Cup. He spent three seasons with the hometown Arrows and produced 57 goals and 72 assists in 46 games.
“It meant a lot winning back-to-back Minto Cups because it was a first for Six Nations, and it was my last two years of juniors,” said Maracle. “Last year meant a little bit more because it was on home soil and we won it in front of family, friends and our fans.”
Maracle also won two championships with the Junior “B” Six Nations Rebels, raising the Cup in 2011 and 2012. He recently completed a season with the Ohsweken Demons of the Canadian Lacrosse League (CLax). With the Demons, he scored eight goals and chipped in 15 assists in nine games.
On Wednesday, Maracle will make the quick drive to the Iroquois Lacrosse Arena to join his new NLL team at practice.
“I am looking forward to meeting the guys and the coaching staff,” he said.