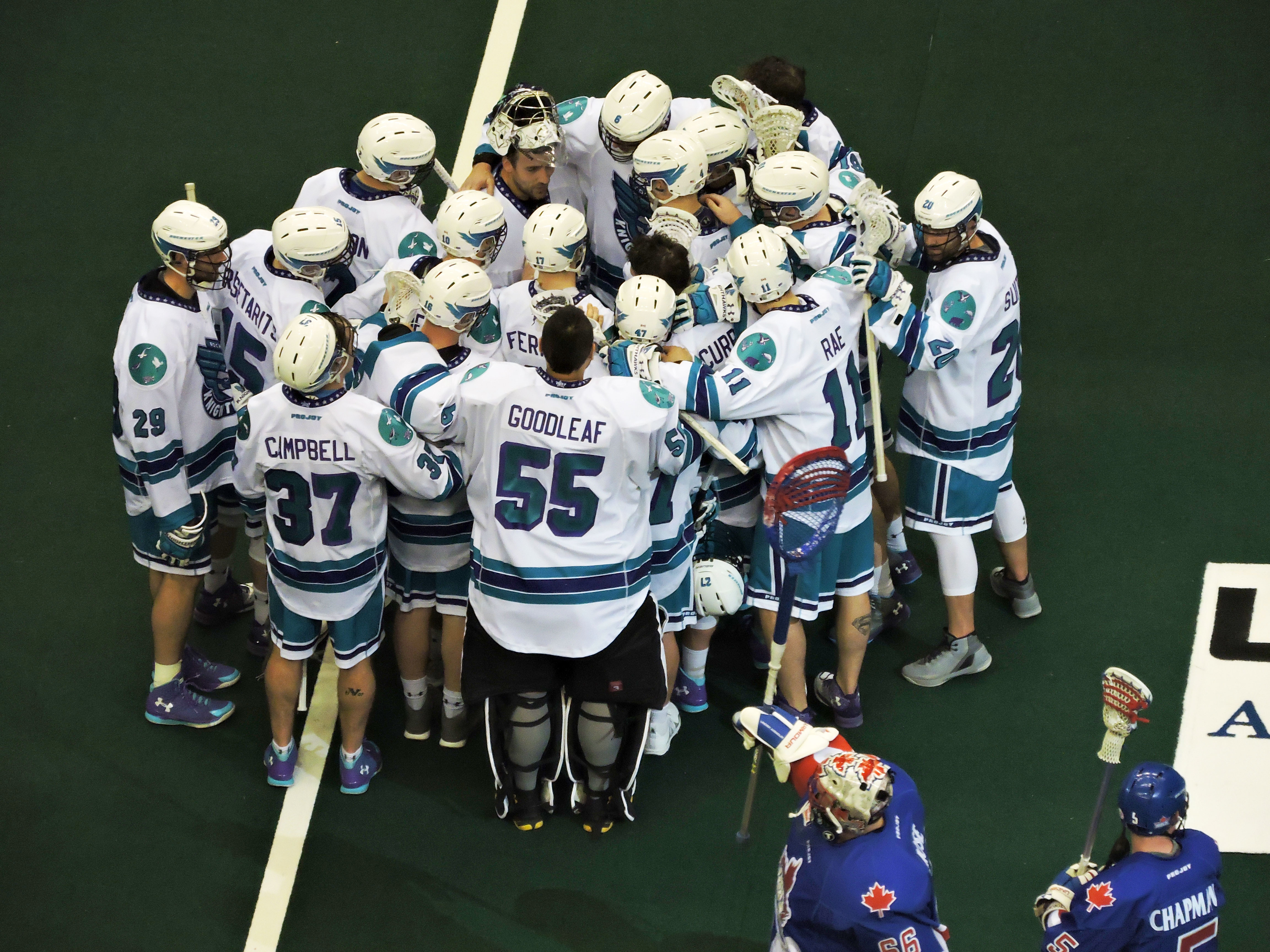 The Rochester Knighthawks walked into the Air Canada Centre Saturday a very different team than the one that lost to the Toronto Rock 12-5 in the NLL season opener.

The Knighthawks took control of Saturday’s game early and showed the Rock they won’t be walked all over with a 9-8 win over the home team. The win evens the Knighthawks record to 2-2 and drops the Rock to 2-1.

The Knighthawks were outplayed in every category except the score. They were nearly doubled in shots and loose balls and lost 81% of the game’s face-offs. But their defense was stellar and that was the difference. From Matt Vinc to the debut of Andrew Suitor in a Knighthawks uniform, they limited the looks of the Rock who just couldn’t beat Vinc, who recorded his 6041st save during the game.

“We’ll take the win,” Suitor said. “That’s a very talented and well coached Toronto team and we’ll be seeing them again. We just have to continue to move forward. As everyone knows in this league it’s a quick turnaround so we’ll celebrate it and then we’re back to work for New England next week.”

Vinc had struggled through the first three games of the season staking the Knighthawks to their 1-2 record. But the five-time goaltender of the year was in the zone Saturday turning away 49 shots.

“That was his 6000th save tonight,” Suitor said of his new goaltender. “I don’t know how many goalies in the league have done that (FYI: there are four others in league history) but in my opinion he’s the best in the world and it’s an absolute privilege to play in front of him.”

Assistant coach Paul Day was impressed with the ability of his defense to stop the Rock’s noted transition game.

“We were more prepared for it this time,” he said. “You didn’t really see us shooting from the outside at all and against them they’re full of speed and score a lot of goals in transition. Turned out we scored two and they scored one in transition… I thought our D guys did a really good job making them shoot from the outside rather than chasing them to the boards. Vno was really solid tonight.”

Jarrett Davis scored 27 seconds into the first quarter. Josh Currier and Brad Gillies extended the early streak to 3-0 before Brett Hickey scored a pair to cut the lead.

Tom Schreiber tied the game 1:01 into the second but the Knighthawks went on a four goal tear to go up 7-3. Ian Llord scored his first goal of the season on a fast break. Joe Resetarits then sandwiched a Kyle Jackson power play marker. Hickey got one more before the half.

The Knighthawks shocked the Rock who built a 5-0 lead on the Rush two weeks ago in their home opener. The Rock were flat most of the game and couldn’t keep up with the energy of the young Knighthawks.

“That’s something we’re trying to work on every game is bringing that effort,” Dawson said. “We’re a young team and that’s how we’re going to win games, by being greedy by just going 110% the whole time. It’s something that was a big focus right from morning shoot around to the game and it’s something we have to focus on for the rest of the year.”

Schreiber and Resetarits traded goals in the third quarter.

The Rock turned on the jets in the fourth, powered by a hungry crowd, but Vinc stayed on point and made some key saves. The Rock scored three to the Knighthawks one but that one goal from Jackson was the game winner.

“We had great composure tonight even when they got within one,” Day praised. “For a group of pretty young guys they handled it pretty well. It was a good team effort for 60 minutes.”

The Knighthawks are led in scoring by a pair of rookies. Jackson’s two goals and assist added to his team leading total of 17 points. Currier’s goal and two assists has him tied for second with 14 points with Resetarits.

“We’ve injected some new blood,” Dawson explained. “We were getting a bit old. From an organizational standpoint they wanted to get younger and that’s what we did this year. We’re still kind of gelling but I think we’re not done yet.”

The Knighthawks got a boost this week before the game with the announcement of Suitor’s activation. Dan Dawson returned from the holdout list and most surprisingly, Cody Jamieson made his season debut after off-season ACL surgery.

However, Jamieson didn’t make it through a quarter before leaving the game with the trainer. In his brief appearance he assisted on the game’s first two goals.

Day didn’t have an update on his status, but Jamieson was seen walking out of the ACC under his own power (albeit carrying crutches).

“Lower body right now. We’ll have to see how he’s doing in a couple of days.”