Last week I mentioned that lacrosse is often inaccurately referred to as a cousin of hockey. Although the sticks may make for an easy comparison, the motion of the players is completely different. In fact, I’d argue that besides the sticks and their popularity in Canada, lacrosse and hockey have nothing to do with one another.

Hockey players must make split-second decisions with the puck and move it before being dislodged from it. Lacrosse players have the luxury of controlling possession. Hockey’s philosophy is that the quantity of scoring chances matter; throw the puck on net, and something good will happen. In lacrosse you can carefully create quality shots. The strategies used to create these looks are the same strategies used in basketball.

That’s right. The winter sport played on the hardwood – not on the ice – is the closer cousin of lacrosse. Here’s why:

One of the most common offensive formations in basketball is a 1-4 high stack. The point guard is at the top of the arc with two perimeter players on the wing and two big men on the elbows. Here’s what it looks like: 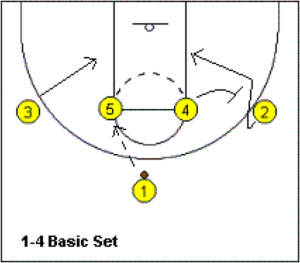 Teams love this formation because it gets the defense on the same plane. From here it is easy to screen for one another and make backdoor cuts. Very often, as described in the image above, the interior players will screen for those on the wing. Lacrosse fans will recognize this as a double mumbo.

The double mumbo is run out of the 1-4-1 set – essentially the same as a 1-4 set. The midfielder at the top of the formation plays the role of the point guard. However, in lacrosse it is more common to see the wing players screen for the men on the crease. Quint Kessenich breaks it down on the whiteboard along with some footage of Duke running it. [The clip is from 2009 – yes, that is Ned Crotty (#22) assisting Justin Turri (#12) on that goal!]

Simple off-ball screens help create open looks in both the high stack and the double mumbo formations. The level nature of the 1-4 and 1-4-1 set makes it difficult for defenses to fight through these screens.

Nobody plays a zone defense better than Syracuse basketball. Jim Boeheim’s squads have had a ton of success with the 2-3 zone throughout the years. Here’s an image from last year’s game between Louisville and Syracuse. Gorgui Dieng is wide open on the elbow – he catches the entry pass and knocks down the jump shot. 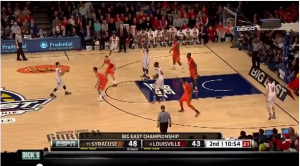 Later in this game, the defense collapses on Dieng quicker. Have any idea what happens? Yup. He kicks it to the wing for a wide open three-pointer. 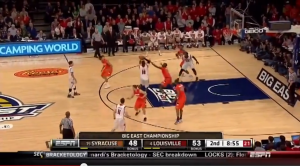 The best way to beat the 2-3 zone is with quick ball movement and a respected high post presence. Oddly enough, that’s the best way to beat lacrosse zones as well. The most common zone defense in lacrosse comes in man-down situations. When the defense is forced to play 5-on-6, everyone needs to move as if they are one unit attached by a string. Here’s an image of Hamilton’s EMO without a man on the crease: 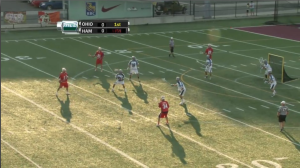 Sometimes extra-man opportunity offenses will put a man on the crease from the start. This opens up the outside shots, just as Dieng’s jump-shooting opened up a three-pointer from the wing against Syracuse. Here’s Hamilton’s EMO with a man on the crease: 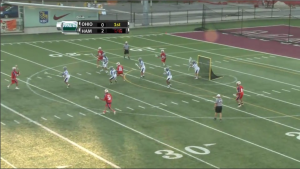 Notice how compact the zone is. The defense must account for the man on the crease. Typically, one of the defenders on the weak side will crash down to him. Unless the crease defender is playing man-to-man outside of the zone, this means everyone can potentially defend the crease and must be ready to do so at any time. Basically, everyone is sloughed in – not just the man on the crease. Goaltenders must love seeing Jeremy Sieverts, Mike Sawyer and Steven Brooks with their hands free from 14-yards out…

[Side note: Matt Poskay is the best EMO crease attackman I’ve ever seen. His combination of hands and mid-range shooting make him nearly impossible to defend. Leave him open for a fraction of a second, and he gets a shot off. It’s amazing to watch.]

Pick-and-rolls have always been a huge part of lacrosse. At the collegiate level they are typically run at X. However, Denver enjoyed a lot of success with Zack Greer running side pick-and-rolls this season.

Both as the ball carrier and as the screener, Greer was able to get some great looks in Denver’s offense. In this clip Cannons rookie defenseman Scott Ratliff is unable to get over this screen. Greer gets an easy look from a great shooting area.

Watch Greer here. He is the screener for Terry Kimener. He screens, re-screens and rolls. The end result is another easy look.

In this next clip Greer is the ball-carrier again. Brendan Mundorf sets a hard screen on Josh Hawkins, who looks like he never saw it coming. Hawkins never recovers and Greer scores.

Tucker Durkin (covering Mundorf) is in no position to ‘blue’ or ‘ice’ the screen. No, not this kind of ‘blue.’

This kind of blue. Watch how San Antonio repeatedly denies Chris Paul the opportunity to run a pick-and-roll in this film breakdown by Grantland’s Zach Lowe.

Lacrosse defenses cannot ‘ice’ screens as easily as basketball defenses can, due to the sheer size of the field. Often, screens in lacrosse are intended to create mismatches and put short-stick defensive midfielders on top scorers. It is difficult to deny a screen and keep the matchups you’d like defensively. Major League Lacrosse defenses need to find a way to defend these Greer pick-and-rolls though, even if it means surrendering less-than-favorable matchups. Otherwise, strong shooting midfields will continue to tear them up.

Sometimes the best way to create offense involves no screens or cuts at all. Certain players can put their team on the board via isolation plays. I don’t think I need a video clip to demonstrate isolation basketball; anyone who has ever seen Kobe Bryant play knows what I’m talking about.

Although less frequent than in basketball, isolation plays certainly occur in lacrosse. They come in all shapes and sizes, too. There are the freakishly physical Garrett Thul dodges.

[Side note: Bull-dodge isn’t the correct term for what Thul does here. As a lacrosse community we need to do this man justice and re-name the dodge. Is it a train-dodge? A tank-dodge? (I like the Army implications there!) A truck-dodge? I’m highly skeptical that any animal can display this much power.]

There are also the shifty, nifty, shaky isolation dodges like the one Stephen Berger uses here.

Old-timers might frown upon isolation plays. Yes, it detracts from the ball movement and the flow of the team – but there is no denying that isolation plays can often be a remedy for the stagnant offenses.

Some of the best basketball plays occur when a player like Josh Smith is sleeping on the wing and his man cuts backdoor for an alley-oop. Well, the same happens in lacrosse – except players are even more susceptible to these cuts.

With fifteen yards between the goal line and the end line, offenses have a ton of room to work from in “Gretzky’s office.” Whether the ball is up top, on the wing, in the alley or at X, defenders need to keep their head on a  360-degree swivel.

…and the always-flashy Tim Desko:

I have to mention one major difference: Major League Lacrosse players leave it all on the field every night. Tune into a game, and I promise you won’t see players jogging back on defense. You won’t see Pop benching his three best players because the game has no playoff implications. You won’t hear about Dwight Howard whining. And you definitely won’t see any ticky-tack hand-check fouls. The NBA preaches the ‘ball is life’ mentality; MLL practices it.