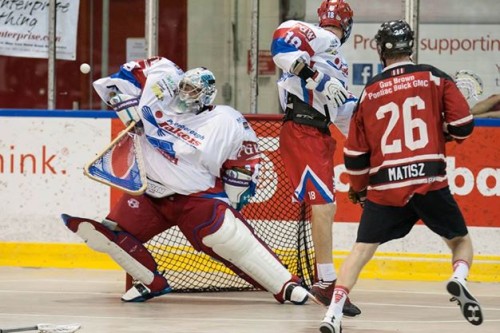 In the city, the team is known as the Century 21 Lakers. To everyone outside the city, they are, and always will be, the Peterborough Lakers.

Rookie GM Paul Day isn’t surprised by his team’s results; after all, he has made several moves to strengthen the team and is now seeing his hard work pay off. That said, he recognized that the MSL “is a tough league, on any night anyone can win.”

“Six Nations is the team to beat,” he acknowledged, “and we all will try and knock them off. We have our hands full but it will be a fun ride.”

It has been fun in Peterborough, so far. The team that went through so much off season turmoil on the business side has shown no ill effects on the floor, drawing the fans in and creating their usual excitement in the city during the summer. Curtis Dickson has been nothing short of awe-inducing, as the man nicknamed “Superman” has scored 14 goals and nine assists in only five games. Evan Kirk also has three of those wins in goal, showing why he helped lead the Chiefs to the last two Mann Cups. The team just keeps adding powerhouse players.

However, it’s not all sunshine and daisies in Lakerland.

The team learned this week that Mark Steenhuis, fan favourite and last year’s league MVP, partially tore both his ACL and MCL in a game last week after another Laker fell into him following a check by Oakville’s Damon Edwards. The team also will not have Ian Llord, who has an injury that is more serious than originally thought and will be taking the season off to heal. Lord was obtained along with Rory Glaves, who is expected to join the lineup soon, for Andrew Watt.

Of the Steenhuis injury, Day said that it’s a “tough loss. He’s an energy guy that just keeps going. The young guys, Josh Currier and Matt Crough, both will step up and improve for us. Curtis Dickson has been fantastic and will continue to improve.”

Also out with knee injuries are Andrew Suitor, Kyle Sorensen, and Josh Gillam, although Gillam is expected to play later this summer.

As a result of those injuries, the Lakers may depend more than they had planned on Scott Evans, who has only played one game this season. Evans has been a fan favourite in Peterborough for a long time, but in recent years has earned the ire of some fans with his slow gait, and reactionary attitude on the floor that has resulted in a lot of questionable penalties. The team may also depend on call-ups from the Ennismore Sr. B team, players who have already seen time in the MSL over the years, like Eric Shewell, Alex Henderson, and Riley Quinlan.

Another concern is the third period. Playing a full 60 minutes was a challenge in last year’s MSL final, and that particular habit reared its ugly head Monday in Oakville. The Lakers had an 8-2 lead after the second, but won only 8-6, causing some nervous moments for fans watching.

“It’s a new season,” Day said. “Every game is an opportunity to learn something. It’s very tough being up 8-2 in the third and keeping focused but it was an excellent opportunity to focus on discipline.”

Focusing on discipline is half the battle; keeping that killer instinct for a full 60 is the other half. Day isn’t worried about the team.

“We will score by committee,” he says, ”and all will pick up the slack in transition, including Chad Tutton who will join us as soon as school ends. We love the play of the young guys (the call-ups) and some will continue to contribute… we want them to play as much lacrosse as possible to help both [area] teams. We plan on getting as many players as possible integrated into our system so it’s a seamless fit on any night.”