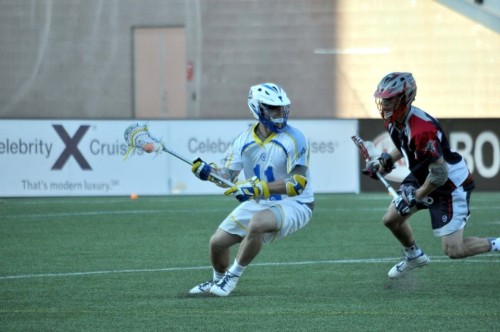 Cameron and Roman Lao-Gosney ’12 were two of the most influential figures in the breakthrough of the Lehigh men’s lacrosse program. Today, they are continuing to make Lehigh proud in Major League Lacrosse, enjoying success due in large part to a foundation and common theme from their time donning the Brown and White.

“You absolutely have to be internally driven to work out through the entire week, especially if you have a Monday-through-Friday career,” said Cameron. “We’re all so busy with our careers that you really have to go out of your way to go to the gym or head to the field.

“Whether it’s wall ball or watching game film, you have to find ways to sneak it in,” he continued. “Otherwise, it’s going to show on the field through not being in shape or not knowing the other team’s tendencies. The MLL is so tough, but players who make the time are successful.”

The Lao-Gosney twins have been successful; they are regulars for the Florida Launch and continue to grow by the day. After sporadic playing time as rookies in 2012, they have grown into their roles in 2015. Cameron is seeing consistent time at defensive midfield and the faceoff wing while Roman has been a regular two-way midfielder. They are regulars in a league that features only 152 spots on active gameday rosters (19 spots per team multiplied by eight teams in the league).

The transition to professional lacrosse was an adjustment. Cameron and Roman were initially asked to primarily play defensive midfield after playing primarily offense at Lehigh.

“I had to get really good at defensive midfield against some of the best players in the world dodging at me every play,” said Roman. “I had to refine my defensive game.”

Cameron was asked to do the same and for him, it took a different mindset to truly thrive in his role as a defensive midfielder.

“At first, I kind of rejected the defensive role,” he said “I didn’t express (the rejection) outwardly by any means, or at least I tried not to show it. Internally, I was always grappling with the idea of being a defensive midfielder.

“However, during offseason training leading up to this season, I changed my mindset entirely,” Cameron continued. “I came to terms with the fact that I could still make a huge impact on the game for my team by being on the field, playing defense and helping between the lines with getting groundballs and all those effort plays.”

Perhaps it’s fitting the Lao-Gosneys are breaking into the league with effort plays because those effort players are what Lehigh head coach Kevin Cassese always stresses within his program. Cameron and Roman are model examples of the type players, and people, Cassese looks for.

“Roman and Cameron are prototypical Lehigh Lacrosse men,” said Cassese, who played in Major League Lacrosse from 2003-09. “As soon as I met them, I knew they had the potential to be program changers, and that certainly turned out to be the case. They have always been hard workers, fierce competitors and genuinely nice young men.”

Cassese’s first two recruits as a head coach at Lehigh, the Lao-Gosneys returned the favor by helping create a culture of accountability which led to tremendous individual and team success.

“For players to get better, you have to work when no one is watching,” said Cameron. “That’s something Coach Cassese always goes on and on about. Players are going to get better in the offseason and during the summer, when other players decide they’ll take time off. This is true for success in college lacrosse and the MLL.”

Hard work wasn’t the only thing Cameron took from his Lehigh days.

“Holding myself accountable is also important,” he said. “Seeing negative habits and negative tendencies, I need to be self-aware enough to see what I’m doing wrong and then critique myself and work to get better. That’s a huge part of progressing as a player.”

The breakthrough season for the Lehigh program was the Lao-Gosneys’ senior year of 2012 when the team finished 14-3, won the program’s first-ever Patriot League Tournament Title and advanced to its first NCAA Tournament. The tone was set that season by a trio of captains: Cameron Lao-Gosney, Roman Lao-Gosney and Blaise Fullen.

The culture around the program changed dramatically. Lehigh’s rise was a work in progress, capped off by the breakthrough of 2012, which saw the Mountain Hawks enjoy the fruits of their labor.

“That season was honestly one of the greatest experiences I’ve ever had in my life,” said Cameron. “The more removed I am from the season, the more I think about it and the more things become clear to me. In the midst of the season, it’s hard for you to be really conscious of what’s happening and what’s changing. Our group of guys, plus the coaches, turned a team that was used to losing into a team that demanded success. That’s not easy by any means.”

The culture changed in many ways, most notably, taking hard work to the next level.

“Looking back to our class and the class after us, we were working hard year-round,” said Cameron. “With guys getting in extra work, extra lifts and extra shooting time, it’s similar to how you enjoy success in the MLL. If a guy gets in extra reps, they’re ultimately going to get better and they’re going to push others to get better as well. I think it comes from the leaders and goes right down.”

“I have always admired the passion with which Roman and Cameron play the game and the commitment to being reliable teammates and high-level leaders, regardless of their roles within the team,” said Cassese. “At Lehigh, they helped make hard work a prerequisite and they helped make ‘extra work’ a staple for our program.”

The Lao-Gosneys’ influence has been felt, and will continue to be felt, at Lehigh for years to come. After the historic season, the Mountain Hawks repeated as Patriot League Champions in 2013.

“To be a part of that 2012 team and leave a legacy of a Patriot League Championship, you only hope it continues,” said Roman. “Those guys did it again, so that makes me very proud because it was a byproduct of the previous years.”

“It was really cool after leaving to see the culture remain true with the newer classes coming in,” said Cameron. “There was an understanding that winning wasn’t an option; it was mandatory. It’s a psychological thing. Especially my freshman and sophomore years, we were losing so much. It was quite depressing going to games already having lost in your minds. That’s not a good place to be, in lacrosse and in life.”

The Lao-Gosneys’ hard-working mentality is evident in all areas of their lives. On the field, they have both played in every game for the Launch. Roman has nine goals, two assists and nine groundballs as an emerging offensive midfielder while Cameron has tallied two goals, one assist and 12 groundballs. Off the field, they are thriving in their professional careers in the film production industry in New York City.

“I work for an amazing producer. He’s a great guy who’s really taken me under his wing and has shown me the ropes and the lay of the land in the film industry,” said Cameron. “I do a bunch of different things. I’ve been getting a lot of experience editing, which in terms of making a story, is amazing. You start to understand where the pieces fall, what makes sense and how a story relates to the audience.”

Some days, Cameron is behind the camera helping with shoots. He’s continued to beef up his resume, and has made strong connections in the field while also working with some notable celebrities.

“Recently, I assisted Christian Slater,” said Cameron. “He was doing a voiceover recording session for a documentary coming out. It was neat being around him.”

Roman’s work isn’t too shabby, either.

“I’m a freelance production assistant on bigger commercial work and music video work,” he said. “I helped on a Madonna shoot earlier. There have been some other big names. I’m a production assistant, helping the producers and artists with what they need.”

The brothers are working together to make waves with freelance projects as well.

“Roman and I are in the middle of getting a website out there and getting our directing reel together, which is probably the most satisfying aspect of our film careers right now because we can go out and make our own productions,” said Cameron. “We’re shooting a lacrosse commercial spec right now which we’d like to pitch to film lacrosse companies and get more involved in directing lacrosse commercials. It’s a huge opportunity. I think some better story-based lacrosse commercials is needed, too.”

The Lao-Gosneys are working hard with an ultimate goal in mind.

“We want to direct a feature film together,” said Roman. “We want to get into commercial work. Along with the lacrosse commercial, we want to work with music videos, short films and keep progressing with script writing and feature film making.”

“That goal is way down the road, but I see certain landmarks,” said Cameron. “It can definitely start with shorter-form content like commercial work, music videos and short videos which we’re starting to get now. The end goal is definitely to direct an independent feature film, maybe even a lacrosse one.”

Lacrosse will always be part of the Lao-Gosneys’ DNA. They even made their movie debuts in 2012, playing roles in the lacrosse movie Crooked Arrows. Flash back to today and as they look towards the rest of their Major League Lacrosse season, their goals remain the same – to continue improving and representing Lehigh at the game’s highest level.

“Coach Cassese and all the coaches just pushing me, breaking us down and making me mentally confident has really paid off in the MLL,” said Roman. “Especially with so many big names, ACC players and whatnot, you have to be able to play with the big boys. I love Lehigh and I love the school, I love the team, the coaches and everyone there.”

The Lao-Gosneys keep tabs on the current Lehigh team and have high hopes for the Mountain Hawks’ program moving forward. Lehigh has advanced to five straight Patriot League Tournaments, including three championship games and two titles, but everyone around Lehigh Lacrosse is looking to get to that next level.

“The guys need to know, you can’t get complacent,” said Roman. “We’ve won Patriot League Championships, but that’s never the only goal. You have to shoot higher. You need to understand that teams (around the country) are loaded and stacked and you’ve got to find that something else to make you better. Get the most out of your teammates and work that much harder every day to get even farther.”

Cameron and Roman’s 2012 team hosted an NCAA Tournament Game and was ever so close to beating Maryland and advancing to the National Quarterfinals, and possibly even further. Roman knows the program is capable of big things, but it all begins with hard work.

“A National Championship is honestly the biggest goal and I would love to see Lehigh advance past the first round, the second round and make it to the Final Four,” he said. “They just need to work harder than everyone else.”

Cameron and Roman Lao-Gosney set the tone for their team and because of it, they find themselves among a select group of individuals playing a game they love at the highest level.

And the Lehigh program is better today because of their impact.