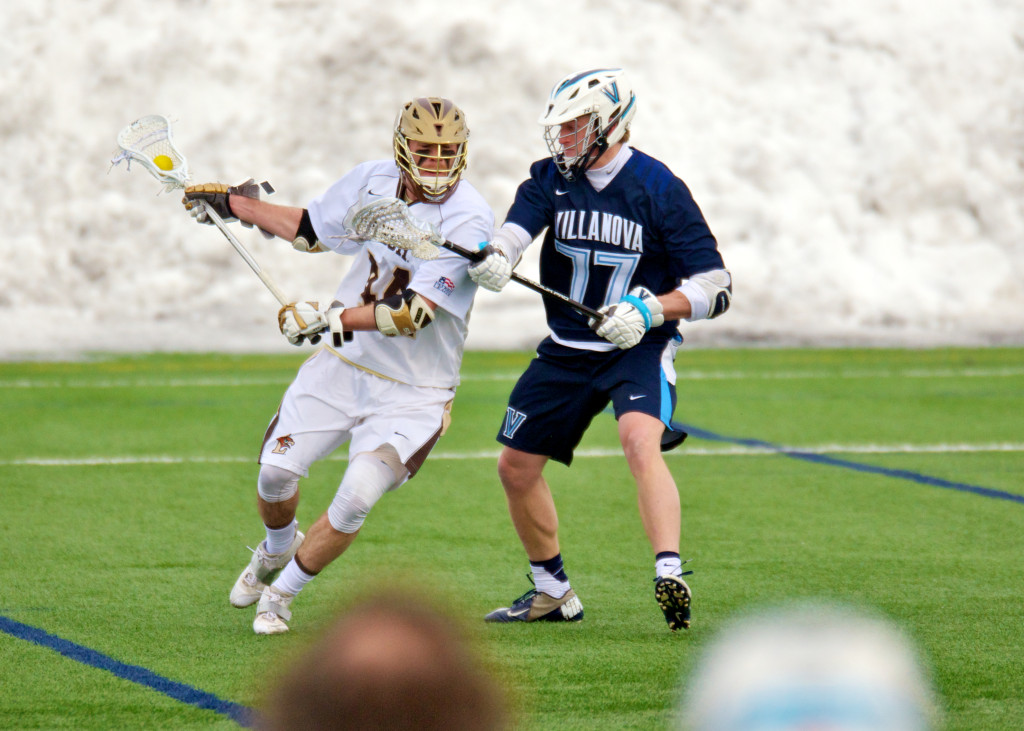 The Lehigh men’s lacrosse team jumped out to a 9-4 lead early in the second half, Colgate pulled as close as one, but the Mountain Hawks responded with the game’s final two goals to earn their third straight win, 12-9 on Saturday. With the win, Lehigh improves to 4-1 on the season and 2-0 in Patriot League play. Senior Billy Oppenheimer helped pace the offense in the first half while junior Matt Raposo scored two big fourth-quarter goals to help seal the victory.

“I thought it was a typical Lehigh-Colgate game,” said Lehigh head coach Kevin Cassese. “Colgate did a good job. They came out and brought the fight to us, especially in the third quarter. They really got after us. We knew they were going to do that. It’s a program that really knows how to win, obviously being the defending Patriot League Champions, and we’re a program that’s trying to re-learn how to win. I thought securing this victory today was a major step in the right direction.”

Oppenheimer finished with a career-high five points (two goals, three assists), all in the first half, while Raposo scored three goals for his second-career hat trick. Raposo’s second goal of the game gave Lehigh a 10-7 advantage with 7:37 remaining while his third gave Lehigh an 11-9 lead with 3:12 left in regulation.

“I thought our big boys stepped up when they needed to,” said Cassese. “We got really solid play out of our attack and first midfield. Billy Oppenheimer set a nice tone early in the game and Matt Raposo set a nice tone late in the game. We’re just trying to chip away and trying to be the best team we can. I thought there was a huge momentum shift when Matt Ernst went down (to injury). Our guys did a good job of circling the wagons and making sure it didn’t compound into a loss today. I give our guys a lot of credit; they were mentally tough.”

Weber opened the scoring with a man-up goal with 8:45 remaining in the first half. Colgate responded with the next two goals, but the Mountain Hawks used a three-goal run late in the quarter, scoring at 1:22 and 1:12 to quickly take a 4-2 lead. Rai began the run with his 17th goal of the season then Weber scored twice in a 10-second span. Following a faceoff win, freshman Craig Chick scooped the groundball and Weber fired a shot past Colgate goaltender Brandon Burke.

The Raiders ended the run with an early second-quarter goal to pull within 4-3, but Lehigh had an answer. Oppenheimer began with a goal, assisted by Telesco in an unsettled situation. Oppenheimer then scored an unassisted goal exactly one minute later and assisted on an Eaton goal with 2:08 left in the second quarter to give the Mountain Hawks a 7-3 lead at the half.

Lehigh scored two of the first three third-quarter goals to take a 9-4 lead, but Colgate had an answer, ending the quarter on a 3-0 run and extending its run to 5-1 in the fourth. A Sam Cleveland goal marked Colgate’s second in a 35-second span, pulling the Raiders within 10-9 with 6:17 left in the fourth quarter. That’s when Raposo scored his second unassisted goal in less than five minutes, giving the Mountain Hawks an 11-9 lead.

Sophomore goaltender Adam Sawicki finished with four fourth-quarter saves as Lehigh didn’t let Colgate get any closer. Rai added a nifty goal in the final minute, corralling a groundball off a Burke save, and beating the Raiders’ netminder to account for the 12-9 final.

Final shots were 41-31 in favor of Lehigh while the Mountain Hawks held a 36-28 edge in groundballs. Sawicki finished with 11 saves, across Burke who made 12. Lehigh was 1-of-4 on the extra man while Colgate was 1-of-3.

“I give a lot of credit to my coaching staff,” said Cassese. “Coach Scudder did a tremendous job preparing the defense, Coach Wilson preparing the offense and Adam Sawicki in goal, and Coach Massa preparing the faceoff unit. I thought the assistant coaches had an A+ week all around.”

The Mountain Hawks now hit the road for the next two games, beginning with a showdown at Army West Point next Saturday (Mar. 12) at 12 p.m.