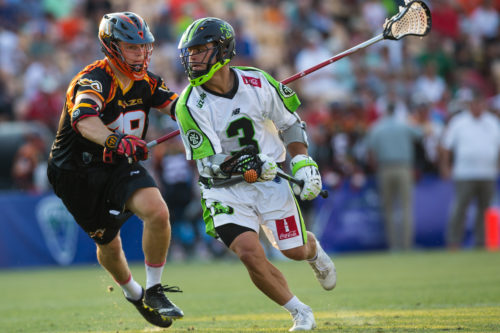 For the first time in franchise history, the New York Lizards traveled down to Kennesaw, Georgia to take on the newest addition to Major League Lacrosse, the Atlanta Blaze. The Lizards had to fight hard, but they left Fifth Third Bank Stadium with a 17-16 overtime win.

The fans in attendance got their money’s worth as they were treated to a closely-contested matchup. The Blaze got on the scoreboard early with a goal by Pat Harbeson, but the teams exchanged the lead thereafter, with Paul Rabil and Jamieson scoring a goal each to give the Lizards the lead only to have Atlanta regain it with the help of Deemer Class and Kevin Rice. It wasn’t until the end of the end of the first quarter where one team gained the advantage. Kyle Hartzell scored the first of his two two-point goals to give the Lizards the lead back, and a goal by Dave Lawson gave the Lizards a 5-3 advantage at the end of the first quarter.

If the game taught fans anything, it was that no lead was safe in this game. Immediately after the second quarter began, the Blaze, no pun intended, came out hot, quickly diminishing any lead New York had with a goal by Chris May and Justin Pennington, tying the game at six. The Lizards, however, were quick to respond with Hartzell’s second two-point goal, Lawson’s second, and Rob Pannell’s first of the game, increasing the Lizard’s advantage to four. The Blaze managed to cut the lead down to two with Rice’s second goal and Ryan Tucker’s first of the game, but Atlanta still trailed New York 9-7 going into halftime.

The Lizards knew the Blaze weren’t far behind them, so they tried to create a safe distance between them by opening the second half with a goal by Lawson and Pannell. However, the Blaze, again no pun intended, caught fire and immediately got the lead back down to two goals with help from Rice and Randy Staats. They didn’t stop there, as now it was Class’s turn to lead the Atlanta offense. He scored a goal and followed it up with a two-point goal that gave the Blaze their first lead since the first quarter. The lead was short-lived, as Rabil tallied his second goal of the game to knot the game at 12 at the end of the third quarter.

With the fourth quarter, the action on the field started to “heat up”, pun intended, as both teams scrambled to gain any advantage they could. Jamieson gave the Lizards the lead back to open the fourth quarter, but Rice, Staats, and Class scored three goals to put Atlanta up by two. New York quickly got the score back to even with goals from JoJo Marasco and Pannell. May put the Blaze back out front with a goal and it looked like the newest team would defeat the defending champs, but a goal by Tommy Palasek with a little over two minutes to play in regulation tied the game at 16 and forced overtime where Lawson’s fourth goal of the game helped the Lizards edged the Blaze 17-16.

With the win, the Lizards improve to 5-1 on the season and remain atop the MLL standings ahead of the Ohio Machine. For their next game, the Lizards will return home to James M. Shuart Stadium next Saturday, June 18th, in a rematch of last year’s semi-finals against the Boston Cannons. The game is scheduled for 7:00 pm.