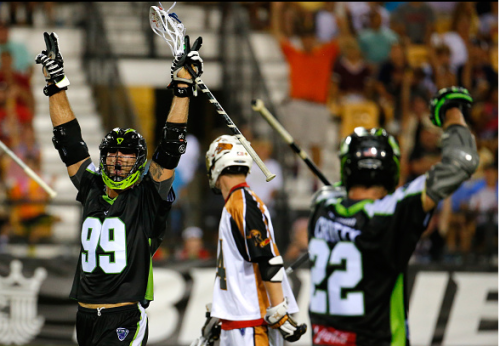 For the second meeting in a row between the New York Lizards and Boston Cannons, the game went in overtime to determine a winner. And for the second time in a row, it was Lizards scoring the crucial overtime goal that gave them a 13-12 victory over the Cannons.

The play of both teams in the first quarter indicated to fans this was going to be another close game in the Lizards/Cannons rivalry. Even though both teams scored two goals in the first quarter, it was the Cannons who had a 3-2 advantage at the end. While the Lizards opted to play it safe and use Paul Rabil, the former Boston Cannon traded to the Lizards last year, to score their two goals, the Cannons’ Brent Adams took a chance and fired the ball past Drew Adams while standing outside the 2-point arc. Justin Turri scored the other goal in the quarter for Boston.

Play in the second quarter was, more or less, the same as the first quarter. The only difference was the Cannons scored three goals while the Lizards only scored two. Cody Jamieson and Matt Gibson were the goal-scorers for the Lizards while it was Turri, Will Manny, and Brandon Mullins who led the Cannon’s offense. By the end of the first half, Boston increased its lead over New York to two goals, 6-4.

A sense of urgency overcame the Lizards during halftime and they came out of the locker room, looking to cut the lead down, maybe even take the lead. The only problem is, the Cannons had all the momentum carry over from the first half, and their offense just continued to roll. Rabil, Gibson, and Dave Lawson attempted to get the game tied, but the Cannons quickly neutralized the Lizards’ offense with goals from Adams, Josh Hawkins, and David Emala. The third quarter ended with the Cannons still holding a two-goal lead over the Lizards, 9-7.

Boston sought to put New York away early in the fourth quarter with two goals from Turri and Kylor Bellistri, but if the first game of the season against the Rattler taught MLL fans anything, it was never count out the Lizards. The four-goal deficit was quickly trimmed to one after New York went on a three-goal run, led by Rob Pannell, Rabil, and Lawson. Manny got the lead back up to two goals, but that was quickly erased with two goals from Rabil and Lawson. Not wanting to send the fans home disappointed, Lawson scored his second overtime goal in a row to give the Lizards the 13-12 victory.

With the win, the Lizards will improve to 6-1, and continue to sit atop the standings, one game ahead of the Ohio Machine. For their next game, the Lizards will travel to Chesapeake to take on the Bayhawks. That game will start at 7:30 pm.