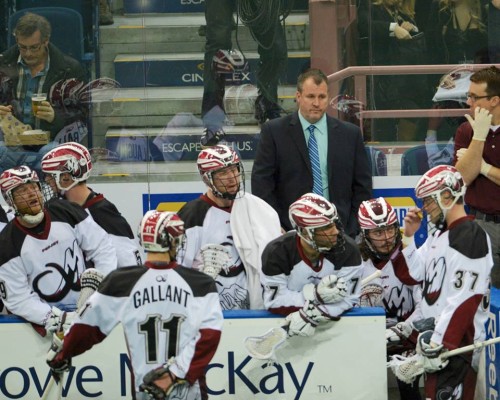 For the second straight game, an NLL team struggled in its home opener to put points on the board. While that was the Rochester Knighthawks on Thursday night, it was the Buffalo Bandits who fell to the Colorado Mammoth at home on Friday, 12-8. A crowd of nearly 15,000 was on hand to watch both teams open their seasons.

The Mammoth jumped out to a 3-0 lead as Colorado goalie Dillon Ward shut down a Bandits offense that struggled to move the ball. With Anthony Malcolm announced to be injured right before the game, Blaze Riorden was a late addition from the practice roster, and he along with new addition Craig Point seemed to struggle making anything happen.

Dhane Smith, last season’s MVP, was also shut down, not scoring until less than a minute left in the game. Robert Hope picked up 12 loose balls as Colorado flaunted what might be one of the top defenses in the league.

The newest member of the Mammoth, Zack Greer, scored three goals in his debut after being acquired by Saskatchewan in the off season. Callum Crawford led the team with six points, two of which were goals, and defenders Creighton Reid and Dan Coates even got in on the offense with tallies of their own. Jacob Ruset also scored twice in his NLL debut.

Colorado also scored three times on the power play while shutting down Buffalo with its penalty kill after the Bandits had the best man-up unit in the league last season. The Mammoth had an answer for each time the Bandits began to come up in the contest.

The Bandits dominated the faceoff game with Nick Weiss, Mitch Wilde, and Point each contributing in place of Jay Thorimbert, who the team lost in the off season to free agency.

Ryan Benesch and Alex Kedoh Hill were each able to score three times for the Bandits, but that created three quarters of the entire Buffalo offense. Daryl Veltman also missed the contest with his wife giving birth earlier in the week, so between him and Malcolm missing the game, Buffalo’s offense had difficulty moving the ball around.

Colorado has to be happy with the 47 save performance from Ward, while the Bandits pulled Anthony Cosmo for David DiRuscio in the second half.

Colorado plays its first home game next week against the Vancouver Stealth while the Bandits are off until January 14th when they host the Georgia Swarm.