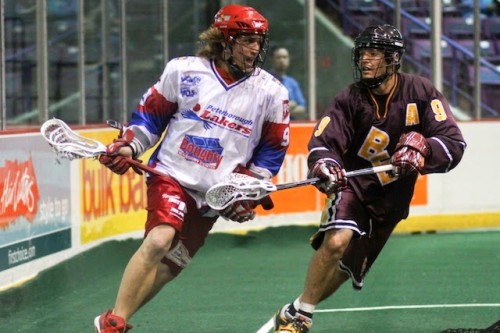 The Peterborough Century 21 Lakers—and Buffalo Bandits—received good news this past week. Mark Steenhuis, who was injured early in the MSL season and thought to be lost for 6-8 months, is close to returning to action. What was thought to be an ACL tear turned out to be a grade two MCL tear and probable ACL strain, which has a much shorter healing time.

He won’t return for the Lakers series against the Oakville Rock, which they lead 2-0. However, it’s possible fans could see him return for an MSL final or Mann Cup series.

Steenhuis took some time to speak to local media, including me, after Sunday’s game in Peterborough.

“I’m just trying to be honest with people,” Steenhuis expressed. “I’ve got a big brace that I’m using. There is a possibility of coming back, but it’s just the progress that it takes. [The doctors] want no pain and feeling 100% and there’s still some pain in that area right now. I guess in a week or two there’s a chance that the pain will subside. I’ve been working hard on it, running, hitting the streets, hitting the gym, things like that. I guess in a sense I’m trying to get back but it’s also something I’ve got to be very diligent about.”

The former MSL leading scorer has battled injuries in the past, but has never had to miss so much time, so he admitted that it was weird to be watching his teammates play without him.

“I’ve done shoulders, ankles, things like that but pretty much everything I’ve played through,” he said. “It was definitely a weird thing to sit up in the stands tonight and see the game. It was odd but it was nice, we got a big win and if the knee feels good and I’m feeling no pain and and if I can get back to give these guys a boost it’d be cool.”

Steenhuis was at the Memorial Centre for the first time since injuring his knee on June 11, after being knocked into by a teammate who had been checked by one of the Rock. It was an accident, an unusual play that had terrible consequences. Steenhuis said playing on the turf complicates his return and is a partial factor in why it will take so long to return.

“What happened to me with the original incident was kind of a freak incident,” he said. “With our guy getting hit from behind, if that happened again, regardless of if I have a good ACL… it’s just something you don’t want to rush, definitely with knees, especially on turf, you’ve got to be really cautious about it.”

Steenhuis took part in warmup on Sunday to test out his knee.

“It felt pretty good, it’s definitely not probably quite there yet, they want really no pain before I go full tilt,” he said. “But I’m definitely starting to open up a lot of stuff that I’m doing at home, going full tilt, going more game situations, which is nice because that really just started for me a week and a half ago. It’s promising.”

He’s really looking forward to getting back on the floor with his teammates, and was happy on Sunday to see all the fans again.

“I felt like I was playing driving up here,” he said with a laugh. “I was like a little kid, anxious and nervous and laughing… I was anxious to be on the floor, that excitement’s always in this building. It was a cool feeling to come up even though i knew i wasn’t playing but my body was almost telling me I was.”

As Steenhuis made his way off the floor after warmup, fans in one section began cheering, which turned into the whole building spontaneously giving the beloved player a rousing round of applause. They can’t wait to have him back.

“I got a good little cheer while I was out there,” he said. “I was trying to take a few extra shots… to get the sick a little warm and they were cheering. I was trying to tell them to be quiet because I knew I wasn’t playing, they thought I was so I apologize to them for that. That’s the reception you get, that’s the support that you get here, that’s why I love playing here and you don’t want to play anywhere else.”