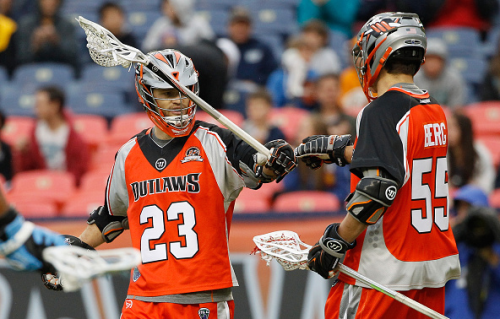 A wild weekend in Major League Lacrosse to kick off the second half of the season was highlighted by the New York Lizards getting upset by Charlotte halting their bid to go undefeated. Not to toot my own horn, but I said in this column on June 10, the Lizards were bound to lose. It was a bit surprising the loss came to the struggling Hounds. Charlotte came into the game losing six straight and traded away one of their young stars Josh Hawkins. Everything screamed New York blowout even with Paul Rabil sitting out due to injury. The Lizards shot selection was not the best at times and the defense looked confused defending Charlotte’s settled offense. The Beast and Drew Adams were outstanding as always, but when the offense is inconsistent and the defense leaves their goalie on an island, upsets happen.

The logjam for second place has got interesting with five teams all at 5-4 overall. Both Ohio and Rochester had chances to get win #6, but both fell in one-goal losses. These two teams play on Sunday so one will get back on track. Ohio had been the hottest team in the league prior to the loss to Chesapeake. The Bayhawks, like the Machine, are playing good lacrosse so this was not necessarily a bad loss. Ohio did not have Brian Phipps in cage, but Scott Rodgers held his own with 12 saves on 23 shots. The Machine got Peter Baum back even though they went 3-0 with him on the sideline as he had two goals and an assist. Ohio is still solid at the X and on defense. The offense may need to produce a little more down the stretch.

The good news for the Rattlers is that after falling into a 16-8 hole, they were able to find some offense from the midfield which has been struggling for a good part of the year. The big concern for Rochester is how bad the defense looked without Mike Manley. Manley covers the opposing team’s top scorer and without him, John Grant, Junior scored a ton. It is unknown how long Manley will be out after going down with an injury in the Boston game before the All-Star break. John Galloway looked unbeatable against Boston, but could not stop a beach ball for the majority of the Denver game. Galloway at one point gave up 15 goals with just four saves. He finished with just nine saves on 30 shots. Galloway has been very up and down all year. Rochester hopes to get “good” Galloway for the stretch run.

Chesapeake is a team on the rise. With Joe Walters and Drew Westervelt back in the mix, the offense looks to be more balanced. This should also relieve the scoring burden from Matt Danowski. Goaltending has also been a high point with Tyler Fiorito having a breakout season. Charlie Raffa made his pro debut and struggled at the X, but he should not take his lumps for too long. Dave Cottle will need the learning curve to excel much faster for Raffa if they are to remain in the hunt.

Even with the win, Denver is trending down. Jesse Schwartzman is not playing well and outside of Dillon Roy, the Outlaws defense has been terrible. They could not put away a Rochester team that did not play well at either end of the field. The lack of defense almost cost them the Rattlers game Saturday. Missing Anthony Kelly is also tough to deal with and they may have lost Wes Berg as he went down with an injury. They still have to deal with the Lizards twice as well.

Boston is the final team in this 2nd place mix although I don’t see it lasting long. Picking up Josh Hawkins for picks was a great move. The Cannons also saw the debut of Wells Stanwick and Ryan Tucker as both scored their first career goals. The future is very bright in New England. They are stacked with a lot of good young talent. They are probably at least a year or two away from being a legit contender.

John Grant, Jr., Denver: Grant was unstoppable against his former team. He had seven goals and an assist including an unreal behind the back game winner in overtime.

Tyler Fiorito, Chesapeake: Another outstanding weekend as he stopped 23 shots including eight saves in the 4th quarter allowing only three goals in the second half and overtime.

Kevin Cunningham, Charlotte: Cunningham had a hat trick and the game winner with 3:16 to play ending the Lizards perfect season.

Michael Ehrhardt, Charlotte: He had a 2-point goal in the first half, but in the closing seconds of the Lizards game, a penalty was called on Charlotte which would give the Lizards the ball. Instead of picking it up and stopping the game, Ehrhardt let it roll then “cheaped” it to midfield taking valuable seconds off the clock. On the restart with only a few seconds left, New York never got a good look at cage thus sealing the upset.

Max Seibald, Boston: Seibald had four goals and an assist including the game winner vs. Florida. He also got a score with under 20 seconds left to close the game to a one-point gap going into halftime as Boston gained momentum after being down four.

1- New York (8-1). They were bound to lose one, but have some deficiencies been exposed?

2- Chesapeake (5-4). Bayhawks are gelling at the right time.

7- Charlotte (2-7). Can the win over the Lizards propel them into a late season run?