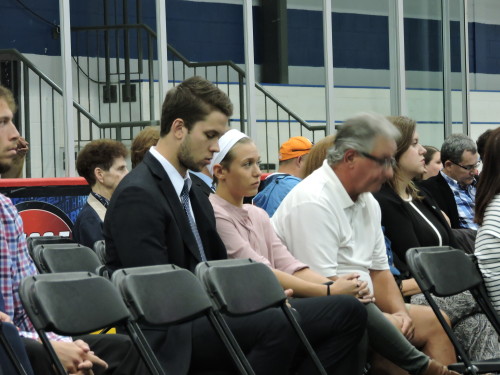 The Buffalo Bandits had a relatively quiet draft in September with only four picks. However, they had the notable distinction of picking the tallest player in the draft in Mike Triolo in the third round, 27th overall. He was signed to a one year NLL contract on October 16th.

“I’m so happy,” Triolo said after he had met with the Bandits brass at the draft. “This is what the dream was, and it finally happened and I’m now moving on to the next step in my career.”

At 6’7”, Triolo will join goaltender Brodie MacDonald as the tallest NLL players. Dan Dawson and Brock Sorensen are 6’6”, and there are a number of players at 6’5”. Steve Priolo is the second tallest Bandit now at 6’5”.

Triolo, from Toronto, is a versatile player at any running position in the game, having played long-stick midfield at Pfeiffer University from 2012-2015, and is listed as offense for the MSL’s Brooklin Redmen, though he can also play defense and is great on face-offs.

He was projected to go anywhere from the second to fourth rounds, so having to wait until the third round wasn’t unexpected for Triolo, but none the less, it was nerve wracking.

“I was losing my mind,” he said. “You always want to go as high as possible. I was kinda hoping to go a little higher, but I was only their second pick. And after talking to them [the day before the draft] I’m just more than excited to be there.”

Triolo joined the Redmen in 2013 and has been a steady player since his rookie season. He was their primary face-off man in 2015, winning 17/39 recorded draws (stats are not kept consistently in all MSL arenas). He has also spent time with the Sr. B Brooklin Merchants over the past two seasons.

“After practicing the NLL structure I can definitely take [my face-offs] to the next level,” Triolo said. “It’s a little different going from the box draws in the summer and then going to the NLL draws as it’s a totally different kind of game, but it’s definitely something I can bring to the roster as well.”

He has been referred to as perhaps a “jack of all trades, master of none,” due to his ability to play all ends of the floor, and is not a prolific goal scorer. However, his offensive upside is there and as he gets more comfortable in his tall frame each season, his point production will increase. He has 59 points in 47 games for the Redmen over three summers, and scored 80 points in 46 games over three years at Pfeiffer.

“I do everything I can and I’m really coming into my game where I need it to be,” Triolo said. “There’s a couple guys out here [at the draft] that are masters of scoring already, and hopefully I can become that guy. Whatever they say, you take it with a grain of salt.”

Triolo is hopeful he can make a good impression during his first training camp and is excited to play for new assistant coach John Tavares.

“I know a lot of the guys who have played there and do play there (in Buffalo), and now that Tavares is a coach, hopefully I can make an impression that counts.”