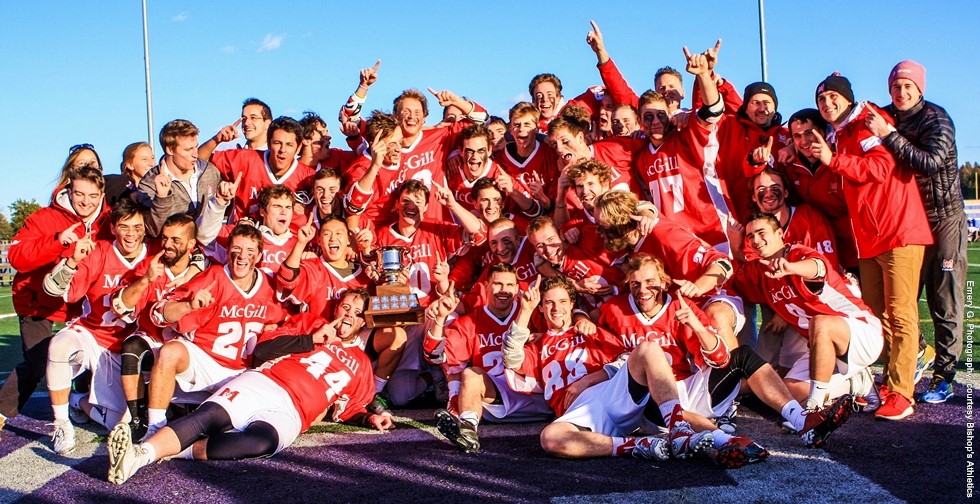 Last season, the McGill Redmen ended their season by watching the Guelph Gryphons raise the Baggataway Cup while they let their perfect season slip right through their fingers.

Fast forward 12 months later, and those very same Redmen claimed redemption as they knocked off the Western Mustangs 15-11 to capture the program’s second Canadian University Field Lacrosse Association title and cap off a perfect 15-0 CUFLA season.

Although the back-to-back Baggataway Cup final losses were painful for the Redmen, head coach Tim Murdoch believes it was a necessary learning experience in their 2015 title.

The Redmen had a commanding 7-1 lead at half and 11-5 after three quarters. Western managed to pot six goals in the final frame, but it wouldn’t be enough to complete the comeback.

McGill was led by senior midfielder Andres Bjella, who had the biggest game of his CUFLA career, filling the net for seven goals.

“Bjella’s performance was one of the very best I have seen as McGill’s head coach in 13 seasons,” said Murdoch. “All year Anders had been waiting to get back to the finals, and he really led us. We have three of the top three midfielders in the East in Connor Goodwin, Emile Sassone-Lawless and Bjella, so our opponents had a tough time all year in containing this trio. Western put an LSM on Goodwin, which allowed Bjella to roam freely and score seven goals. He was on target with his shot and Western’s zone defense was a shooters’ paradise.”

The Milwaukee,WI native was one of eight different Redmen goal scorers, as Spencer Bromley(2), Emile Sassone-Lawless, Maxime Murdoch, Quinton Bradley, Drew Laird, Jake Gutman and Goose Bolton found the back of the net.

Although Murdoch is pleased with the perfect 15-0 season and Baggataway Cup championship, he is already prepping for the 2016 season.

“We lose so many talented players and incredible leadership to graduation next May 2016,” said Murdoch. “We only have 20 of 34 players projected to return in 2016, so we will be a very different looking team.”

Co-Captains Bjella, Goodwin, defender Paul Rakoczy and midfielder Rufus Frost are the most notable of the 12 seniors departing the McGill program as two-time Baggataway Cup champions.

Although the Redmen will have a much younger club in 2016, with Murdoch’s returning core of player as and an already strong incoming recruiting class, McGill will be poised to once again be a CUFLA powerhouse next season.

“We have worked very hard to recruit some of the top student-athletes in Canada to choose McGill over NCAA options, plus American players (many with dual stats Canadian Passports) to McGill, so I am confident that we will have a lot of talented players on next year’s team, but we will be a lot younger.”