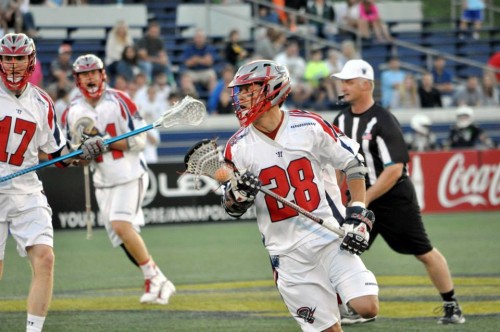 Adam Ghitelman made a save midway through overtime in Hempstead, New York for the Boston Cannons last August. Instead of passing the ball away, Ghitelman run up the field, ripping off a shot easily saved by New York Lizards’ goalie Drew Adams.

Adams quickly threw the ball downfield, and Matt Gibson laid in the game winner with 7:16 remaining in overtime. With the goal, Adams sealed the deal on a trip to the Major League Lacrosse championships in Kennesaw, Georgia, as well as putting a stunning end to the Cannons 2015 campaign.

Six days later on August 8, 2015 the New York Lizards hoisted the Steinfeld Cup after a 15-12 victory over the Rochester Rattlers.

For the Cannons, the lost to the Lizard was tough to swallow.

After starting the season off with a win over an under-preforming Denver Outlaws the Cannons dropped three straight to Charlotte and New York twice. The following week Boston battled hard to a 17-16 victory over the Rattlers.

Boston went on to get two more straight wins against Chesapeake and on the road in Denver before falling 19-12 in their final home game of the 2015 season to the Ohio Machine. The Cannons clinched a spot in the playoffs for the first time since 2012 in a 9-8 overtime game on the road in Annapolis against the Bayhawks.

In the 2016 MLL Supplemental Draft, the Cannons selected former Tufts standout Beau Wood who will look to step in and contribute to the Cannons stellar attack unit. Wood is a former All-American and national champion at Tufts University, and the rookie looks to make an immediate impact after a year away from competitive lacrosse.

Sean Quirk will be a new face on the sideline this season, as he takes over the reins of the Cannons. Quirk takes the helm after former head coach John Tucker left to become the General Manager and head coach of the Atlanta Blaze, whom are in their inaugural season.

After coaching Division III Endicott for 17 seasons, Quirk makes the jump to Major League Lacrosse. In his tenure at Endicott, Quirk had an impressive 243-95 record overall, including nine NCAA tournament appearances. He still serves as an Associate Director of Athletics for the Gulls.

After having an another emerging season in 2015, Will Manny has solidified himself as one of the key components to the Cannons short and long-term success. Last week, the Cannons announced Manny will serve as one of the captains for the 2015 season.

Last season Manny lead the Cannons with 44 points, including 28 goals in only 12 games on the season. Manny looks to build off his all-star season, and lead the Cannons back to their championship ways, which has eluded them since 2011.

Seibald was one of the key acquisitions from the blockbuster Rabil trade, and returns to the Cannons this season as the team’s other captain. In 2015, Seibald finished with 28 points, good for fourth on the team.

The 2009 #2 overall pick out of Cornell will look to bring the Cannons over the hump this season. After losing to his former team in the MLL semifinals this past August, Seibald and company have their eyes set on Kennesaw, Georgia as well as the Steinfeld Cup.

Buchanan will once again start the season on the inactive list as he finishes up his duties with the NLL New England Blackwolves, but expect him to jump right into the lineup without a glitch once re-activated. In 2015 Buchanan had 21 goals in 11 games for Boston in his sixth season in MLL.

One of the Cannons major in-season moves including a midseason trade with the Charlotte Hounds for midfielder Josh Hawkins. Boston, whom is still looking to fill the void of depth at the midfield position after the Rabil trade, will have their eyes on Hawkins to fill the role. The 2016 campaign provides Hawkins the ability to grow into an elite player, and a potential fit into the teams’ long term plans.

Brent Adams is another returning all-star to the Cannons roster. Adams recorded 24 points on the season, and looks to win his first MLL championship during his fourth season with the Cannons.

This offseason, the Cannons lost both Veteran Scott Ratliff and rookie Ryan Tucker to the Atlanta Blaze. Veteran goaltender Jordan Burke retired from the MLL, leaving newly acquired Tyler Fiorito to step in between the pipes.

In January, the Boston Cannons selected John Uppgren from Division III Tufts University. Uppgren is currently in the midst of a stellar senior season with the two-time defending champion Jumbos, and could be a possible addition midway through the season, reuniting with former teammate Beau Wood. Uppgren possess a unique threat in his ability to seamlessly switch between midfield and attack, and the Division III Player of the Year nominee could add an infusion of youth to the roster.

Boston Cannons have the pieces to be a serious contender for another Major League Championship. Looking ahead to the season, June 4th match-up in Atlanta looks like a promising affair as the team’s second matchup of the season, and the potential MLL debut of #1 overall pick for the Blaze, Miles Jones, depending on how the Duke Blue Devils fair in the NCAA Tournament.

The June 18th matchup on Long Island midway through the 2016 campaign could be pivotal toward playoff seeding. After leaving a dirty taste in Boston’s mouth last August, watch the Cannons look for some much awaited payback. Both teams square off back at Harvard Stadium in the regular season finale on Saturday July 30th.

After being a major speed bump in the road to a third MLL championship for New York in 2015, Boston has the talent to make a legitimate run for championship this season. The road to Kennesaw, Georgia starts April 23, 2016 as the Cannons travel to Charlotte to take on the Hounds in the season opener!