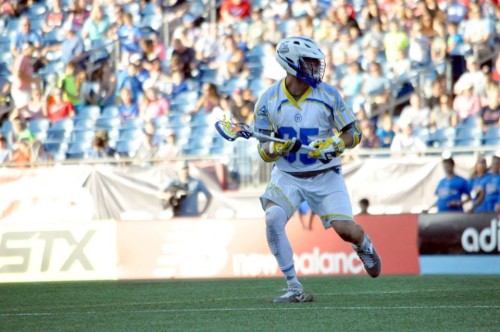 After another weekend of intense lacrosse there are only two teams tied for second place, Boston and Ohio, while the three third place teams are looking for an edge to secure a playoff berth.  Chesapeake, Rochester, and Denver were left scratching their heads after their losses as their playoff chances are decreasing.  New York remains in first place despite losing to the Florida Launch 16-12.  Charlotte and Florida remain in seventh and eighth place but both posted impressive wins over top tier teams.  The playoff picture is clearing up, but if this season has proved anything, it is that no win is guaranteed.  Newly acquired players had significant contributions in all four games this weekend as teams jockey for position during the playoff push.

The Lizards were without Paul Rabil for a second week but they still scored five goals in the first quarter to Florida’s three goals.  The problem was that two of the Launch goals were two pointers that left the score tied going into the second quarter.  Florida exploded for five goals in the second to lead at halftime.  The Launch offense was without Lyle and Miles Thompson due to coaching commitments.  Casey Powell and Kieran McArdle lead the way with five points each.  Steven Brooks and Conner Buczek chipped in three points apiece as well as newly acquired Jovan Miller added one of Florida’s two point goals.  New York leads the league in two point goals against with thirteen.  The Lizard man up offense continues to struggle to find the back of the net as they went 0-3.  Greg Gurenlian went 67% from the X; his lowest percentage of the year as Chris Mattes, his fellow Face Off Academy coach, took all the face offs for Florida.  Mattes and the Florida wings fought all game for every possession, Brett Queener made 18 saves and the Launch defense led by Tucker Durkin, P.T. Ricci, Bobby Lawrence and Pat Frazier had one of their best games of the season.  Make no mistake, New York will have Paul Rabil back in the lineup next well and make the playoffs, but the past two losses has shown light on some weaknesses and will have to wait another week for their franchise 100th win.

Charlotte pulled off the other upset of the rainy weekend with a 14-11 win over Denver.  The Outlaws’ struggles at the X continue with both Anthony Kelly and Geoff Snider recovering from injuries.  Hounds face off specialist, Brendan Fowler, took advantage of their absence and went 20-26.  Fowler’s performance combined with a three minute non-releasable penalty in the third quarter ensured Charlotte’s domination of the ball.  The game started off rather slowly with the Hounds leading 4-3 at halftime.  This was a far cry from Denver’s overtime win against Rochester as their offense rarely had the ball and the Hounds rattled off eight goals to the Outlaws single third quarter tally.  Four of the Hounds eight goals were the result of an illegal stick penalty against Denver.  Kevin Cunningham hit his stride with his new team as he scored 7 points (4 goals and 3 assists) and gave Charlotte a more potent attack when teamed with rookie Joey Sankey.  Denver tried to turn the tables in the fourth as they outscored Charlotte 7-2, but the clock was against them as well as the Hounds.  Charlotte is starting to find success and Denver continues to miss their face off specialists for the second week and it has been a weakness that opponents have seized upon.  If the Outlaws do not get either Kelly or Snider back in the lineup they may well miss the playoffs for the first time in ten years.  Perhaps it was the weather or travel, but Denver did not look like a playoff team against Charlotte.

In the most entertaining game of the weekend Boston moved into second place after defeating Chesapeake14-11.  Boston has played with a chip on their shoulder all season and is looking to prove they are not in a rebuilding season after the Paul Rabil trade that sent the all world midfielder to New York.  The Cannons, Scott Ratliff in particular, played inspired right out of the gates as they scored four straight goals.  Chesapeake responded with three goals and made it 4-3 at the end of the first quarter.  Both teams scored two goals apiece in the second quarter as the offense grew stagnant.  This was not unexpected as Chesapeake’s Tyler Fiorito made 23 saves and Boston’s Jordan Burke made 18.  The game remained close as Bayhawks and Cannons scored 4 goals each in the fourth.  Boston broke the deadlock and outscored Chesapeake 4-2 in the fourth as Kevin Buchanan finished the game with 5 goals, 2 in the fourth last quarter.  Chesapeake was without Charlie Raffa and Adam Rand and C.J. Costabile went 8-27 at the X while Boston’s Craig Bunker won 19 draws.  Face offs continue to be a glaring weakness for the Bayhawks and despite winning 4 of their last 6, they have had no answers for this facet of the game.  Along with Denver this may be a weakness that haunts the Hawks and keeps them out of the playoffs.  Boston is young, but motivated and Kevin Barney, ”the man that traded Paul Rabil,” needs consideration for GM of the Year.  He traded for Charlotte’s Josh Hawkins and that move paid dividends as the SSDM finished with 2 assists and two groundballs in such a close back and forth game.

Ohio defeated Rochester 17-12 thanks to a strong first quarter performance where they jumped out to an early lead and outscored the Rattlers 7-3.  Greg Puskuldjian fed the Machine offense as he maintained his steady performance at the X going 17-31 as the Machine offense kept the ball away from the Rattlers and Brian Phipps turned away 22 shots as he continued his hot streak despite missing last week’s game.  Rochester missed Mike Manley’s presence on defense as he is recovering from a knee injury.  Manley’s absence changes the dynamics of the Rattlers defense and they are not the same team without him.  Eight different players scored points for the Machine as their offense moved the ball and took better shots than in last week’s loss the Chesapeake.  Rochester made a run in the third quarter and pulled within three, but Marcus Holman and Kyle Harrison scored three goals including Harrison’s two pointer in the fourth to pull away and seal the win.  The Rattlers get another crack at the Machine this weekend as they try to make the play offs.  The race for the four playoff spots is still not a lock as the unpredictable MLL season rolls on and I love it!