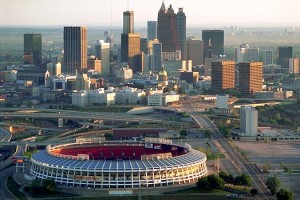 Its been one of the cities that has been talked about when it comes to MLL expansion, and its a place that does make a lot of sense for the league. Atlanta, Georgia is a relatively untested lacrosse market, but one that does show a lot of potential.

To start off, youth lacrosse is growing at an incredible rate around the city. This is always a key for MLL teams, as the sport of lacrosse is very much about attracting a young audience. Atlanta does have some background in lacrosse as well, as they host the SELC Championship. Both get decent attendances and could help convince the league that the MLL is a place to land.

Atlanta has a few locations that wouldÂ definitelyÂ work for a team as well, and they are very reasonable. The Kennesaw StateÂ Stadium, located outside of Atlanta, is the home of the Atlanta Beat of the Women’s Professional Soccer League. Seating a little over 8,000 makes it a great destination for an expansion fanbase. If you want to go on the smaller side there is the Atlanta Silverbacks Park, which seats about 5,000 spectators. It is a work in progress however, as the final version of the complex should seat 15,000. The Atlanta Silverbacks Park currently houses the three Silverbacks affiliated soccer teams as well as the Atlanta rugby team. Either location would make sense for the club, at least a lot more sense than it would be putting a team in the Georgia Dome.

The MLL has made it known that they were interested in Atlanta as a possible market. The commissioner of the league, David Gross, stated on Twitter, “We’re looking at having a team in Atlanta in the next few years if everything plays out the way we want.” With the probable expansion into Florida, Atlanta would help a nice group of southern teams in Charlotte, Florida, and Atlanta. Speaking of Florida, who was tested using the All-Star Game this season, I would not be surprised if Atlanta is the location of next year’s All-Star festivities. The league likes using these games to test the water and it would only make sense that they’d want to look at another market with expansion looming.

Gross has stated that the league does not plan to expand until 2014, two seasons from now. Although the league would like to move west, they plan on doing that by adding multiple teams at the same time. With the likely addition of Florida (who’s odds should be very good after a very well attended game this weekend) it would only make sense for the other 2014 team to be eastern as well. This opens up the door for a place like Atlanta to join the league as the tenth member.

What do you think about Atlanta as a possible future market for the league? Does it have potential, or could it be a bust for the MLL? Make sure to comment below with all your opinions not only about Atlanta, but about the future of the league expansion.