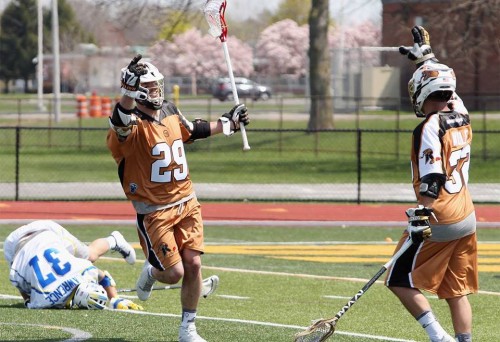 Another week has been completed in the MLL and we are one week away from the All-Star game. In Week 10 the league saw its top two teams go down in the New York Lizards and Ohio Machine. The rankings got quite a shakeup as a result and we have a new team at the top. How far did the Machine and Lizards fall with their respective losses? How high did the Outlaws climb with the upset victory? Take a look for yourself below:

1- Rochester (5-3)- The Rattlers are the hottest team in the league having won five straight games after a Week 10 victory over the Ohio Machine. The Rattlers look much more like the team that went to the MLL championship game than they did during the first three games of this season. Honestly, they should be 6-2 if not for the craziest event to ever happen on a lacrosse field against the Cannons back in May. The good news is they can avenge that loss as they host the up and down Cannons in Week 11.

2- Ohio (6-4)- Ohio weirdly stays at the No. 2 position this week despite two straight losses. The offense is scary but the loss of goalie Scott Rodgers midgame in their loss to the Rattlers is troubling, especially because Rodgers was enjoying his best season as a pro. Additionally, the defense as a whole has allowed 34 goals combined the past two weeks. The Machine will look to snap their losing skid against the Bayhawks in Week 11.

3- New York (6-2)- The Lizards finally succumbed to their defense as they gave up 20 goals to a Outlaws team that was not looking good in recent weeks. Not having faceoff man Greg Gurenlian certainly didn’t help as the Outlaws won 12 more faceoffs than the Lizards but the defense is still out of sorts. New York has a great opportunity to head into the all-star break with a win as they play a Bayhawks team that will be fresh off of playing the Machine on Thursday.

4- Charlotte (5-3)- The Hounds offense exploded for 20 goals against the Atlanta Blaze thanks in large part to the efforts of Kevin Crowley and rookie Ryan Brown. The two combined for 14 of the team’s 30 points on the night and took the burden off Joey Sankey and Mike Chanenchuk who had been carrying the load for the entire season. If they can continue to get a more well-rounded effort on offense, the Hounds could be a scary team heading into the end of the season. They will play the Blaze in the second game of their home-and-home series this weekend.

5- Boston (5-5)- The Cannons snapped their two game losing streak with a win over the Bayhawks and jump over them in the rankings this week as a result. The Cannons swept the season series and hold the head-to-head tiebreaker over the Bayhawks if it comes down to that. Currently, they are ranked fifth in the standings and have a tough road ahead as they play the top 3 teams in the MLL down the stretch. If they have any hope of making the playoffs, it starts this weekend when they play the Rattlers.

6- Chesapeake (4-4)-  The Bayhawks are now losers of two straight games after losing to the Cannons and being swept in the season series. The addition of Myles Jones has helped their offense but their defense continues to struggle having given up 35 goals combined the past two weekends. The Bayhawks will be tested this week as they have two games against the Machine and Lizards. A split would be quite a feat and keep them in the thick of things heading into the homestretch of the season.

7- Denver (3-6)- The Outlaws move up a spot after a very nice win over the previous No. 1 team in the power rankings, the New York Lizards. The Outlaws controlled the faceoff X as Thomas Kelly and Brent Hiken combined to go 24-for-36. Obviously, the absence of Greg Gurenlian helped but so did the fact that six players recorded four or more points in the victory. The Outlaws could get a little momentum right before the All-Star break as they face the lowly Florida Launch in Week 11.

8- Atlanta (3-5)- The Blaze had their opportunity to pull even at .500 and further their momentum after a big Week 9 win over Ohio. Unfortunately, they got blown out by the Charlotte Hounds in Week 10 and it is the second time that they have allowed 20-plus goals this year. They will look to avenge their loss as they take on the Hounds once again as their home-and-home series against Charlotte concludes in Atlanta.

9- Florida (1-6)- Not much to say here other than that they have the worst record and had Week 10 off. It will be interesting to see how they come out after the bye week, especially with an offense that ranks as the league’s worst unit. The offense may find a spark when they play a so-so Outlaws defense but the defense could be in for a very long day.