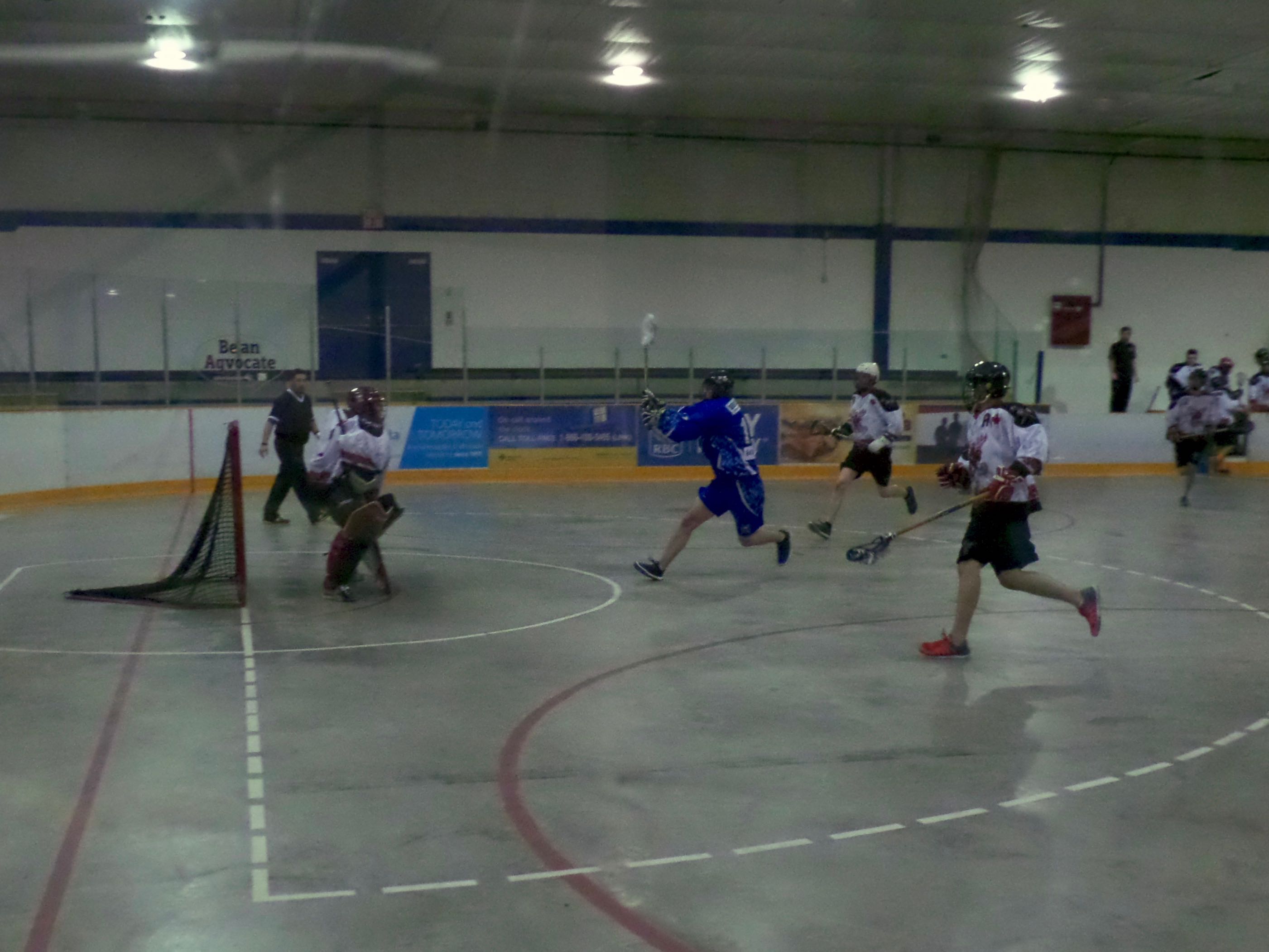 I attended my first Rocky Mountain Lacrosse League game ever on June 19, to see the Lethbridge Barracudas take on the Red Deer Renegades. The first-place ‘Cudas handily beat the Renegades 14-7 in a game where both goaltenders played well and there was some rough stuff, as I think can be expected when you’ve got a bunch of teen boys banging into each other.

Having never been to a Tier II Junior B game before, it was interesting to see the level of play as compared to what I’m used to seeing in the NLL, a couple big jumps up from here. Interestingly, the speed and tempo of the game was right where I expected it to be—the kids can run! The single biggest difference was in execution of plays. Shots and passes were routinely off the mark and the kids who were able to consistently hit their targets looked to be dramatically better than everyone else on the floor. Clearly to me that appears to be the key difference between playing at a competitive level such as this or at an elite level.

This difference most clearly showed up on special teams. Because power plays weren’t necessarily able to get the ball where they wanted it, when they wanted it, power play efficiency was down a bit from higher level play. On the other side of the ball, killing the clock when in possession of the ball was a struggle as players frequently made no attempts to pass the ball and play keep away, opting instead to just go to a corner and wait for a double team or triple team to strip him.

Faceoffs were another place where the skill level I’ve grown accustomed to is not in evidence. With the faceoff men’s sticks starting in contact with the ball, the contest basically turned into the two kids just sliding apart and seeing where the ball popped out, rather than either player trying to trap, scoop, push and pull, or otherwise direct the play. This is clearly a skill that is learned later, at a different level of competition.

Austin Howe, Lethbridge’s best forward, looked like a man playing against boys. By the end of the game he had locked up the RMLL South Central’s scoring title (67 points) after picking up four goals and an assist. He looks to be a big, strong kid who is a step quicker than everyone else, who makes his passes, and who can put his shots where he wants. I’d be very interested to see how he does next year if he has the opportunity to get into a Jr. A program, although that would mean travelling—the Jr. B Barracudas are the best game in town here in Lethbridge.

I was also impressed by the goaltending I saw. Lethbridge’s Tyler Green in particular, made some very good stops on tough shots throughout the game, positioned himself well, and did a decent job of controlling rebounds and turning the team around on transition.

Finally, I was impressed overall by the crowd, which was bigger than I expected and appropriately enthusiastic. Although some of the Red Deer fans/parents were rather vocal with their displeasure about the quality of the officiating (and I don’t think they were wrong on a couple non-calls), things in general were positive. I’m going to have to keep a closer eye on the schedule next year and get out to a few more games.

The Lethbridge Barracudas next action is in the playoffs, beginning on July 8. Their opponents and the exact time and location are yet to be determined.