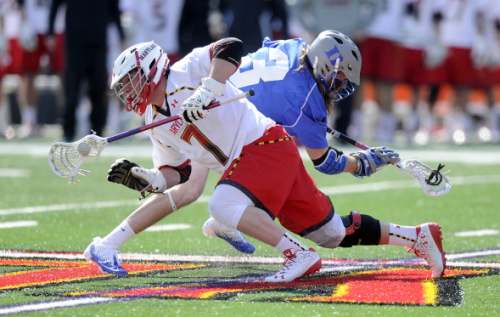 When the Major League Lacrosse Draft took place in January, the players drafted still had time in college to prove they’re worthy of playing professionally. With the MLL season set to begin on Sunday, let’s catch up on some of college’s best who will join the league once the NCAA season comes to an end.

Thompson is the most exciting player in college lacrosse. When the ball’s in his stick, defenders never know where it’s going to go next. Syracuse head coach John Desko compared the Albany offense to spaghetti, because of the fluidity that Thompson plays with. He leads all of Division I with 6.8 points per game and has 29 goals and 39 assists so far this season. On Saturday, Thompson totaled seven points, which tied Rob Pannell for the all-time record of 354 career points. The defending Tewaaraton winner has put together another marvelous season and recently, he’s had seven goals and 15 assists in just the past three games. The Launch will be in good hands when Thompson shows up in Florida.

To complement Thompson on offense, the Launch added Buczek, who will open up the field causing mismatches both high and low inside the restraining box. The Launch ranked last in the league in shots and shots on goal last season and the additions of Buczek and Thompson should help those numbers improve. So far this year, Buczek has 29 goals and 12 assists and has scored at least a goal in every game for the Big Red. He’s scored 11 goals in the past five games. Now entering its second season, the Launch should be a little better offensively.

A short-stick defensive midfielder. Third overall pick in the MLL Draft. Two things that most people wouldn’t think would go together. But they did. The Hounds took Haus to add even more to their depth at SSDM. Haus has scooped a Duke second-best 35 ground balls this season, only behind faceoff specialist Jack Rowe. Haus is a nitty-gritty, grind-it-out kind of player and in the Charlotte system, he should be a good fit playing for a coaching staff that loves its D-middies. Haus will have the chance to play with his brother, John, following Duke’s season, where he is a captain. Though he won’t grab the headlines like Thompson and Buczek, Haus is the type of player that a championship-caliber team needs.

Tucker is a classic Virginia midfielder. He’s got the polished stick skills and strong long-range shot that translate well to the MLL. He went to The Gilman School and has seemingly been around lacrosse his whole life. His mother is the head women’s lacrosse coach at Johns Hopkins. Tucker will step into a Boston team looking to replace Paul Rabil and his otherworldly shooting ability. So in the first round, the Cannons took Tucker, who may be able to assume the role. He may not become the next Paul Rabil — that would be irresponsible to suggest — but he could find a spot and contribute on the pro level. So far this year, Tucker has 22 goals and nine assists.

Speaking of the Cannons replacing Rabil, Glesener may also be able to help that effort. He has one of the hardest shots in all of college lacrosse. Earlier this season, Glesener torched Syracuse for four goals in the Carrier Dome. Though Army fell short of the upset, Glesener lit the building on fire with 11 shots, nearly all of them blistering by regardless of whether they hit the cage or not. He has 25 goals and 18 assists. Though he’s taken 105 shots and only scored 24 percent of the time, Glesener’s uncanny ability to unload is what can make him valuable in the MLL.

Twenty-nine goals, 17 assists and 28 ground balls. Is that a midfielder or what? King has been through the ups and downs. Ohio State’s success has fluctuated over the past four years and having that experience could come in handy when he gets to the MLL. Even in a microcosm of OSU’s success, the past three games have been up and down for King. Against Notre Dame, the Buckeyes were shutout. But against Penn State, King scored three goals and had an assists. Last week against Johns Hopkins, King put five in the back of the net and dished out two helpers in the win over the storied program. King might not have the same reputation as Buczek, but he was a first-round pick for a reason.

Near is another “dirty work” kind of player. If you look at his stat line, that’s not the type of player Near is. He has four goals on nine shots and three assists this year. But look past that and you’ll find a player who is a stud defensive midfielder who can lock up anyone in Division I. In transition, he can also spark the Notre Dame offense. Against Syracuse earlier this season, he even scored the game-winning goal in double overtime. The Rattlers picked up a gem in Near and with pieces already in place, Near could be the player that pushes Rochester over the top after a championship appearance last season.

Remember when I was talking about some of the big, bad attacks in college lacrosse? I got sidetracked with defensive midfielders, but at the end of the first round, Denver picked up another offensive stud. Over the past few seasons, Pontrello’s role has evolved from a surprise up and comer to a savvy veteran and his 17 goals, 24 assists reflect that this year. Last year, he had 51 and 12. Pontrello should fit in and has potential to succeed with the defending champions.