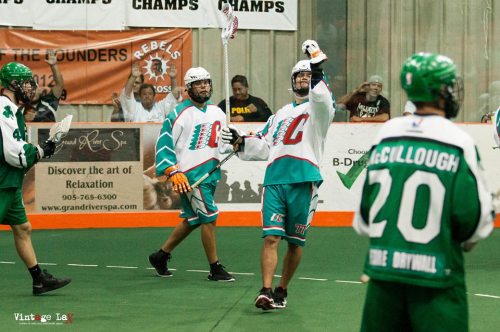 Last season, the final series came down to the Lakers and the Chiefs, with the Chiefs prevailing in the third period of the final game. This season, the teams have already re-kindled their rivalry. The best teams always play each other closely.

Game one, last Thursday in Peterborough, was a 12-8 win for the Chiefs. The Lakers, resting Shawn Evans, were missing the spark they normally have playing in front of the home crowd, and showed near disinterest in spots. Tuesday’s end of the home and home was also a win for the Chiefs, although it was a much closer game at 11-9, the Chiefs cementing their win with an empty net goal in the last minute of play. The Lakers were in the game the whole way and even led twice.

Despite their 0-2 record against the Chiefs, the Lakers remain positive. The Chiefs are the only team they have lost to this season, and they plan to keep it that way.

Assistant coach Tracey Kelusky played in that seven game series last season, but says that it’s a new year and the Lakers aren’t dwelling on past history.

Making a huge difference for each team is the loss of a superstar. Cody Jamieson and Mark Steenhuis are both out for the season; however, each team added a superstar too. Curtis Dickson has 31 points in seven games for the Lakers, and Ryan Benesch and Dhane Smith both have 39 points in eight games for the Chiefs.

Benesch and Smith are familiar with the MSL, while this is Dickson’s first year out east, and his first time facing the powerhouse Six Nations team that just keeps getting stronger.

“Six Nations is a good team, that’s been their reputation the last few years,” Dickson acknowledged on Thursday. “They have a good defense back there, a good goaltender, and that’s something we have to find a way to penetrate. I don’t think our offence played our best tonight, so we’re going to have to go back and take a look at what we right, what we did wrong, and go back out ready to go next [time].”

The Lakers scored 32 goals in their first two games of the season but have not hit double digits since, a stat that is concerning for a team that wants to finish first in the league. Matt Vinc and Evan Kirk, good as they are, can’t stop everything, especially from Benesch and Smith, so the offence has to be better.

“Our offence has struggled the last two games,” Dickson said. “We gotta find the groove that we had in the first few games. They had a couple good chances but I think we outshot them tonight. We just gotta finish our chances, get in front of the net. We’re getting the looks but not burying them.”

The Lakers figure that the Chiefs will be the team they’ll have to beat again this year to book their tickets out west. The two game advantage the Chiefs hold in the season series may decide who gets home floor advantage, but in the MSL, fans know that anything can and will happen, so the Lakers aren’t worrying about those two games.

“We gotta tighten up the ship,” Kelusky acknowledged. “At the end of the day we have a lot of new faces and a lot of new guys that are getting to understand their tendencies. Everyone always says you gotta have chemistry on the offensive side of the ball but it’s equally as important on the back end, to understand what guys’ tendencies are, their habits, and what they’re capable of. I look at the game and as a coaching staff there are a lot of things that are very easy to clean up, it’s just stuff that comes with a new system, playing with new guys, new faces, but at the end of the day it’s June. We’ll figure it out.”

The Lakers and Chiefs next meet on July 2 in Peterborough.