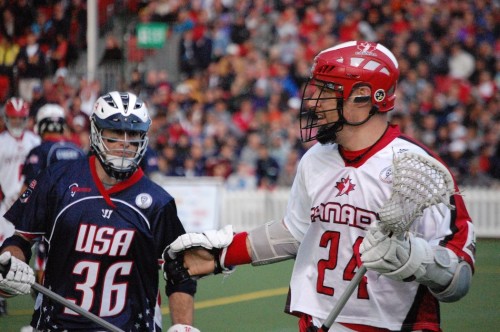 With the World Indoor Lacrosse Championships just slightly over three months away, there’s been some questioning of the way Team Canada pieced together their roster for the 2015 tournament. Some believe their is a strong bias towards Western based players and coaches, as there where numerous omissions from the final roster, that for all intensive purposes should have made the team. While one could argue Team Canada could easily field two teams that are Gold Medal worthy, and the selection was simply based on need and the “better fit” backers of Western based players and coaches do have a leg to stand on in this argument. However in saying that, there where also numerous All-Star caliber players from Ontario that where in some cases not even invited to participate in Team Canada’s 37 man training camp.

As we take a look at Team Canada’s final roster, you’ll see that twenty of the twenty-three players selected where born and played their minor and junior lacrosse in Ontario, while just three players are from Western Canada, an even then Aaron Bold came to Ontario during his final season of Junior to toil with the Peterborough Lakers. When you break down the roster based on where the players play their summer lacrosse, it becomes very slightly less uneven, as thirteen players toil in Ontario’s Major Series, while five players suit up in the Western Lacrosse league, and then of course their are the five players who do not play in either league during the summer, as they choose to either take the summer off or play strictly in the professional field lacrosse league (MLL) based out of the United States. Now when you break it down to where each individual calls home during the NLL season it becomes significantly more even as 12 players ply their trade with Eastern Division teams, while 11 toil in the Western Division.

When you look at Team Canada’s final roster, it’s hard to suggest anyone of the selected players isn’t deserving of their spot, as every one of the twenty-three players selected are all-star caliber players. However when you look at the notable omissions from Team Canada’s final roster, you’ll notice many are from Western Canada. It befuddles me how players like Kevin Crowley, Rhys Duch and Garrett Billings where left off the Canadian Roster, while guys like Corey Small, Logan Schuss, Tyler Digby, Dane Dobbie and Tyler Codron weren’t even invited to the Canadian’s 37 man training camp. One would also have to note, that not one of the Canadian’s four coaches is from the Western part of Canada. Again it befuddles me how a coach like Curt Malawsky who should have been nominated for NLL Coach of the year, is not even considered for an assistant coaches job with the Canadian squad. Names like Chris Gill, Dan Stroup and Pat Coyle, should also have been in the mix, as they did a fantastic job in Colorado this past season, and in Chris Gill’s case, he’s done an excellent job with the Maple Ridge Burrards of the WLA for the past couple of seasons.

Western Lacrosse supporters have every right to assume their is a bias in selecting Team Canada’s roster, as the evidence is there, just look at the final roster and coaching staff. However we also have to consider the fact that there where also numerous highly skilled players and coaches from Ontario that where left of the roster, that where also very deserving of a roster spot. When you consider guys like Rob Hellyer, Brad Self, Jason Noble, Dillon Ward, and former NLL defensive player of the year Sandy Chapman didn’t crack the final roster, you quickly realize just how tough it was to make this version of Team Canada. Throw in the fact the likes of Colin Doyle, Mark Steenhuis, Andrew Suitor, Alex Crepinsek, Patrick Merrill, Evan Kirk and Anthony Cosmo weren’t even invited to training camp and it’s clear that the Canadian Management team selecting both the training camp roster and the final roster, where handed a very tough task.

One could suggest the Canadian management crew decided to go heavy on the Eastern based players to keep costs to a minimal, and that would be a very valid assumption, as we all know that professional lacrosse isn’t a sport where millions of dollars are thrown around like its chump change. However this is a national event, and I find it hard to believe that the Canadians wouldn’t want to send their very best to upstate New York to bring home yet another Gold Medal and keep their perfect record blemish free.

Team Canada will bring a younger and argubably more athletic roster into the tournament in 2015, and while they are still the clear cut favorite to bring home the Gold Medal, the omissions of big game players like Kevin Crowley, Colin Doyle and Garrett Billings may end up hurting them when its all said an done. Youngsters Mark Matthews, Dhane Smith and Adam Jones will be relied upon heavily to produce, and given their most recent NLL season’s I have every reason to believe they will. However there’s still the thought in the back of my head, that possibly neglecting some Western based players and coaches due to costs or biases will have an effect on the Canadian’s final result in 2015.

This is a topic that lacrosse fans, and more specifically Canadian Lacrosse fans can beat to death, as their are valid points across the board on both sides. However I can certainly understand the displeasure from Western Canadian supporters as its hard to ignore the omissions of many of the best players and coaches from that side of the country. I’m not calling for a roster split down the middle 50/50, half from Ontario, half from British Columbia, but I am suggesting that when piecing together a national team, we throw aside this Ontario Vs B.C argument and invite and select the absolute best players available, regardless of costs or any other factors. As a Canadian I want to see my country select the best player available to them, not the most cost efficient or based on where they play their professional lacrosse, just as Americans and other countries supporters would hope their country would do.