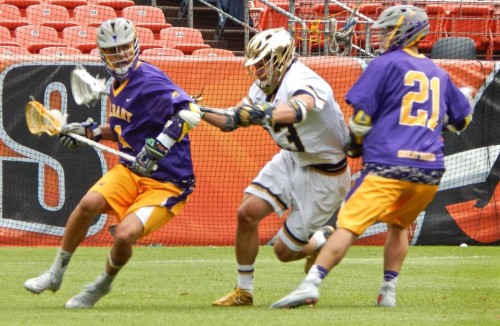 The 2015 NCAA lacrosse season brought us excitement and history for a span of nearly four months.  It started with High Point defeating Delaware on the first day of February.  After months of exciting games filled with various weather conditions, Denver defeated Maryland in perfect weather conditions to win their first ever National Championship.

In the next part of my look back at the 2015 college lacrosse season, I take a look at the individuals that made an impact to the outcomes of many games this year.

The numbers weren’t that pretty (27 G, 25 A), but Kavanagh came up clutch when needed.  Watch the UNC game that he helped cap a comeback at Arlotta.  But he looked awful in the NCAA Tournament as he recorded only one goal and one assist in three games. He also played the last two months with a stress reaction in his pelvis and a torn glute, which made him unable to practice for the past two months, according to Head Coach Kevin Corrigan.  He’ll be back for another season with many of his offensive weapons around him, as the Irish look to finally get their first lacrosse National Championship.

Two years ago, it was Marcus Holman’s team to lead.  Last year, Joey Sankey took the helm.  This year, it was Bitter’s Tar Heels.  The senior attackman recorded 78 points on the season and helped UNC to another strong regular season.  Emphasis on regular, as the Heels lost to Syracuse in the ACC semifinals, and got blown out by Maryland in the NCAA Quarterfinals in a year that many people thought the Tar Heels would finally make Championship Weekend for the first time since 1993.

What a find by Bill Tierney.  The freshman FOGO was about to go to Franklin and Marshall, a Division III school in Lancaster about two hours away from Philadelphia.  Instead, after hearing about the kid, Tierney took a chance, and that chance blossomed into one of the best face-off kids in the entire nation.  He helped give the Pios extra possessions that helped Denver in crucial games, such as both Notre Dame matchups.  After some teams found some weaknesses during the NCAA Tournament, will he be better than his first year?

Jones was a Tewaaraton finalist this year and could be the favorite to win the award next season.  His numbers were less than other players that you’ll see later on this list, as he recorded 77 points, but he also became more of a team player, and when Duke needs him, he can provide help.  He also was named the nation’s best midfielder.  However, he suffered a hand injury during the season that didn’t really slow him down, but I wonder how he would have performed if that injury never happened.  He’s a talented player, and he’ll be a huge threat for the Blue Devils for his senior year.

One of the many huge questions surrounding the Terrapins was who would take over First Team All-American Niko Amato in net?  Coach John Tillman put in UMBC transfer Kyle Bernlohr against Navy and along with help from his tough defense, only gave up one goal against the Midshipmen.  He was the anchor of that top-ranked defense, and eventually was named the nation’s top goaltender and a First Team All-American as well.  He’ll be back for another season in the net, looking to get one step further than just a National Championship appearance.

He was arguably the best defenseman in the nation this season, as he was named the nation’s best defenseman.  Landis was put against opposing team’s top attackmen and shut them down all year.  Like many of the players on this list, he will be returning for his senior year next season, and will be a huge threat for opposing teams to deal with.

Berg shined in the NCAA Tournament (15 G, 3 A in four games) and was named the Tournament’s Most Outstanding Player.  He had a large role with the Pios with players such as Zach Miller and Connor Cannizzaro around him, creating a deadly defense that also took their time in finding the best shot possible.  The Tewaaraton finalist senior from British Columbia made his final year one he will never forget.

The nation’s best attackman, beating the likes of Lyle Thompson, Berg, and Connor Cannizzaro, shined once again in his final year with the Orange, although the end result was not the one that he wanted.  Rice scored 36 goals and 48 assists as the quarterback for Cuse’s offense that had many weapons, which even saw players from the third midfield, make an impact.  Rice was one of the most decorated players on and off the field in Syracuse’s long history, and it will be very tough to replace his production and leadership in the next few years to come.

The younger Cannizzaro shined as a freshman at Maryland, and topped that in his first year at Denver, recording a school record 57 goals and 90 points for the national champions.  Yet, he wasn’t named a Tewaaraton finalist, a head scratcher for many.  I think he can top triple digits in points in the next two seasons and should be a Tewaaraton finalist in those two seasons.  This kid is a special talent and it will be tough for defenses to stop him.

He didn’t record the best season of his career, but without Ty and Miles around him, he still was the best player in the nation.  Enter Connor Fields and Seth Oakes, and he made both players elite attackmen.  Lyle is a special player that only come around every decade, and his talents will be missed for years to come.