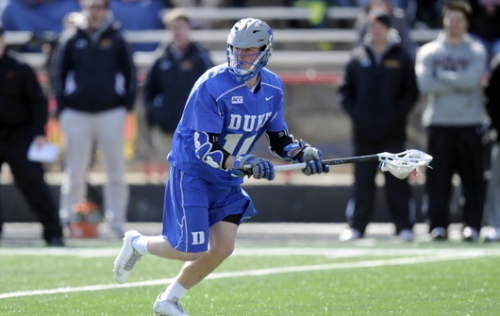 Ah, May… the best time of the year; birds are chirping, flowers are blooming, shorts and flip-flops are becoming regular… oh, and there’s the NCAA LACROSSE CHAMPIONSHIPS!

This Saturday morning we welcome the NCAA Lacrosse Championships to our televisions, and one of the first games will be the Duke Blue Devils (11-7) vs the seventh ranked Loyola Greyhounds (12-3). The teams met earlier in the season, back in March, when Duke exploded for a 15-6 victory over the Greyhounds in Maryland. Tewaaraton Finalist Myles Jones led the way for the Blue Devils by scoring five goals and adding three assists for a game-high eight points. Coming into this weekends’ game, statistics point towards a closer outcome.

Through the 11th of May, the Blue Devil offense has been one of the most efficient in the league. Duke is fourth in the league in Scoring Offense by averaging 13.50 goals per game (the three teams above Duke are Villanova (3), Denver (2), and Brown (1)). The Blue Devils possess five different players that have scored more than 50 points this season. Attackman Justin Guterding leads the way with 69 points (40 goals, 29 assists), with No. 1 overall pick in the MLL Draft, midfielder Myles Jones, right behind him second on the team with 67 points (33 goals, 34 assists). Deemer Class (40 goals, 19 assists), Jack Brucker (40 goals, 13 assists), and Case Matheis (24 goals, 29 assists) are the other three Blue Devils with more than 50 points this season.

While Duke has a very potent, fourth ranked offense, the Loyola Greyhounds possess a stingy defense that currently ranks seventh in the country with only 7.87 goals allowed per game. The goaltending for Loyola has been split primarily between freshman Jacob Stover (89 saves, 61 percent) and sophomore Grant Limone (59 saves, 51 percent). Youth is a key driver of this Greyhound team, as not only are they led in goal by two youngsters, but the team’s leading scorer, Pat Spencer is a freshman that currently has more points than anyone on Duke’s roster; Spencer has 70 points this season on 30 goals and 40 assists. Loyola’s next leading scorer, Zach Herreweyers, has 27 goals and six assists, giving him 33 points on the year.

The last time these two teams met in the playoffs was 2013, when Duke opened their playoff run against Loyola winning 12-11 in double OT, and finishing their playoff run with a 16-10 victory over Syracuse in the National Championship for their first of two back-to-back titles. As we all know in sports, it’s great to reflect on the past and previous success stories—but that won’t necessarily dictate how the present will result. Tomorrow at noon from Baltimore, Maryland, Loyola hopes to end their cold streak against Duke, while the Blue Devils hope they can ride the wave to another NCAA Championship game.